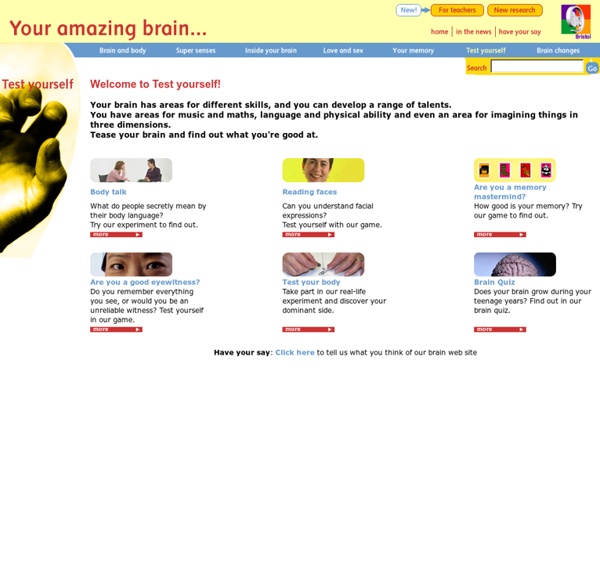 Guess-the-Google UPDATE: Guess-the-google is temporarily offline for maintenance. Hopefully back online soon. About the game Guess-the-google is an addictive guessing game based on Google's image search. It turns the mental activity of searching into a fun, visual and engaging game where people can enjoy the challenge of being the fastest and most efficient at making that connection between search terms and their results. The game requires version 9 of the Flash player or higher to run, you can get the latest version here.

The 150 Best Online Flash Games It was a long and exhausting task: playing hundreds of online games for hours in a row, day after day. It was hard, but someone had to do it. The result is the list that you will find below. Enjoy! Action Games 1. Brain Scanner Records Dreams on Video Just a few weeks ago, we posted about how brain patterns can reveal almost exactly what you're thinking. Now, researchers at UC Berkeley have figured out how to extract what you're picturing inside your head, and they can play it back on video. The way this works is very similar to the mind-reading technique that we covered earlier this month. A functional MRI (fMRI) machine watches the patterns that appear in people's brains as they watch a movie, and then correlates those patterns with the image on the screen. With these data, a complex computer model was created to predict the relationships between a given brain pattern and a given image, and a huge database was created that matched 18,000,000 seconds worth of random YouTube videos to possible brain patterns. Comparing the brain-scan video to the original video is just a way to prove that the system works, but there's nothing stopping this technique from being used to suck video out of people's heads directly.

10 Extravagant Flash Games For The Skilled Only I love flash based games , so do many and many of other people. They help you in passing boring or hectic times during the day. Previously, we wrote etc. In the meanwhile, I covered numerous other flash based games as well, which were truly addictive.

- StumbleUpon WHY DID THE CHICKEN CROSS THE ROAD? Plato: For the greater good. Karl Marx: It was a historical inevitability. Serious Games for Social Change by BreakAway, Ltd - Award-Winning Developer of Numerous Real-Time Strategy Games and Technologically Advanced Desktop Development Software Your goal is to orchestrate a nonviolent resistance campaign from the ground up against dictators, occupiers, authoritarians and oppressive rule. You are supported by the principles and experiences of some of the world's leading nonviolent activists such as, Gandhi, Dr. Martin Luther King, Jr. and Ivan Marovic, subject matter expert on A Force More Powerful, and member of Otpor, the Serbian resistance movement that played a critical role in ousting Slobodan Milosevich. To accomplish this you must assemble a team, build public support, and then recognize and gradually influence the pillars of support within the regime to bring about enduring social change.

Webrangers This is the National Park Service's site for kids of all ages. If you love our National Parks, Monuments and Historic Sites, this site is for you. If you are new to our National Parks, we hope this site helps you experience how wonderful they can be. Seeing in the Dark & SEEDMAGAZINE.COM Credit: cliff1066tm. Patient TN was, by his own account, completely blind. Two consecutive strokes had destroyed the visual cortex of his brain, and consequently, his ability to see. It is not uncommon for stroke patients to suffer brain damage, but the case of TN — referenced by his initials, the general practice in such studies — was peculiar.

śĦeℓℓỴ :] on we heart it / visual bookmark #5103823 xd | We Heart It Cruel xd Add to collections You don't have any collections… Be creative and start beautiful collections to organize your hearts and share with friends. report this entry