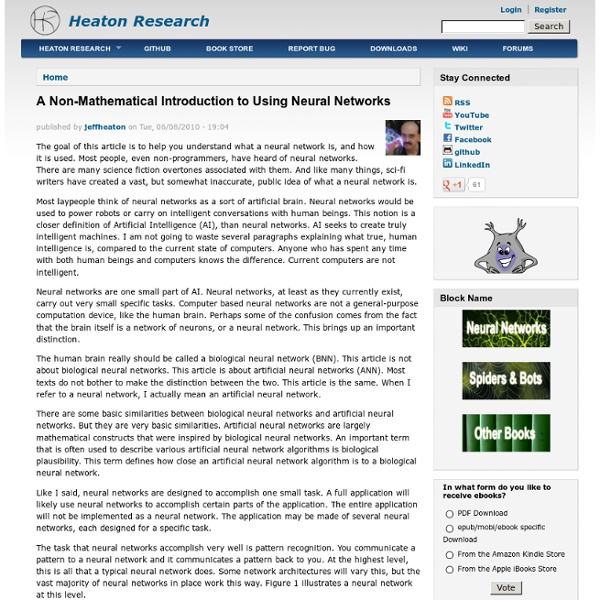 An Introduction to Neural Networks Prof. Leslie Smith Centre for Cognitive and Computational Neuroscience Department of Computing and Mathematics University of Stirling. lss@cs.stir.ac.uk last major update: 25 October 1996: minor update 22 April 1998 and 12 Sept 2001: links updated (they were out of date) 12 Sept 2001; fix to math font (thanks Sietse Brouwer) 2 April 2003 This document is a roughly HTML-ised version of a talk given at the NSYN meeting in Edinburgh, Scotland, on 28 February 1996, then updated a few times in response to comments received. Please email me comments, but remember that this was originally just the slides from an introductory talk! Why would anyone want a `new' sort of computer? What is a neural network? Some algorithms and architectures. Where have they been applied? What new applications are likely? Some useful sources of information. Some comments added Sept 2001 NEW: questions and answers arising from this tutorial Why would anyone want a `new' sort of computer? Good at Not so good at Fast arithmetic

New Pattern Found in Prime Numbers (PhysOrg.com) -- Prime numbers have intrigued curious thinkers for centuries. On one hand, prime numbers seem to be randomly distributed among the natural numbers with no other law than that of chance. But on the other hand, the global distribution of primes reveals a remarkably smooth regularity. This combination of randomness and regularity has motivated researchers to search for patterns in the distribution of primes that may eventually shed light on their ultimate nature. In a recent study, Bartolo Luque and Lucas Lacasa of the Universidad Politécnica de Madrid in Spain have discovered a new pattern in primes that has surprisingly gone unnoticed until now. “Mathematicians have studied prime numbers for centuries,” Lacasa told PhysOrg.com. Benford’s law (BL), named after physicist Frank Benford in 1938, describes the distribution of the leading digits of the numbers in a wide variety of data sets and mathematical sequences. “BL is a specific case of GBL,” Lacasa explained.

PyBrain Hammack Home This book is an introduction to the standard methods of proving mathematical theorems. It has been approved by the American Institute of Mathematics' Open Textbook Initiative. Also see the Mathematical Association of America Math DL review (of the 1st edition), and the Amazon reviews. The second edition is identical to the first edition, except some mistakes have been corrected, new exercises have been added, and Chapter 13 has been extended. Order a copy from Amazon or Barnes & Noble for $13.75 or download a pdf for free here. Part I: Fundamentals Part II: How to Prove Conditional Statements Part III: More on Proof Part IV: Relations, Functions and Cardinality Thanks to readers around the world who wrote to report mistakes and typos! Instructors: Click here for my page for VCU's MATH 300, a course based on this book. I will always offer the book for free on my web page, and for the lowest possible price through on-demand publishing.

Connectivism Editor’s Note: This is a milestone article that deserves careful study. Connectivism should not be con fused with constructivism. George Siemens advances a theory of learning that is consistent with the needs of the twenty first century. George Siemens Introduction Behaviorism, cognitivism, and constructivism are the three broad learning theories most often utilized in the creation of instructional environments. Learners as little as forty years ago would complete the required schooling and enter a career that would often last a lifetime. “One of the most persuasive factors is the shrinking half-life of knowledge. Some significant trends in learning: Many learners will move into a variety of different, possibly unrelated fields over the course of their lifetime. Background Driscoll (2000) defines learning as “a persisting change in human performance or performance potential…[which] must come about as a result of the learner’s experience and interaction with the world” (p.11). Connectivism

The human brain can create structures in up to 11 dimensions Neuroscientists have used a classic branch of maths in a totally new way to peer into the structure of our brains. What they've discovered is that the brain is full of multi-dimensional geometrical structures operating in as many as 11 dimensions. We're used to thinking of the world from a 3-D perspective, so this may sound a bit tricky, but the results of this new study could be the next major step in understanding the fabric of the human brain - the most complex structure we know of. This latest brain model was produced by a team of researchers from the Blue Brain Project, a Swiss research initiative devoted to building a supercomputer-powered reconstruction of the human brain. The team used algebraic topology, a branch of mathematics used to describe the properties of objects and spaces regardless of how they change shape. "We found a world that we had never imagined," says lead researcher, neuroscientist Henry Markram from the EPFL institute in Switzerland.

Max Planck Neuroscience on Nautilus: Surprising Network Activity in the Immature Brain One of the outstanding mysteries of the cerebral cortex is how individual neurons develop the proper synaptic connections to form large-scale, distributed networks. Now, an international team of scientists have gained novel insights from studying spontaneously generated patterns of activity arising from local connections in the early developing visual cortex. These early activity patterns serve as a template for the subsequent development of the long-range neural connections that are a defining feature of mature distributed networks. In a recently published Nature Neuroscience article, scientists at the Max Planck Florida Institute for Neuroscience, Frankfurt Institute for Advanced Studies, Goethe University of Frankfurt, and the University of Minnesota detail how they investigated the visual cortex of the ferret, an ideal model system to explore the early development of networks in the cortex. Lead image credit: sdecoret / Shutterstock