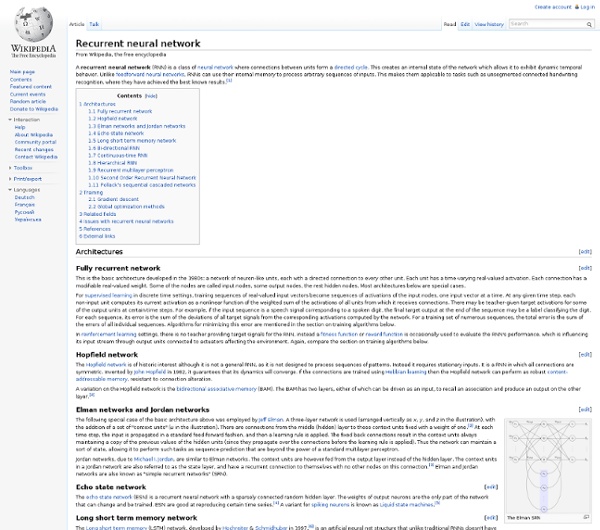 A recurrent neural network (RNN) is a class of neural network where connections between units form a directed cycle. This creates an internal state of the network which allows it to exhibit dynamic temporal behavior. Unlike feedforward neural networks, RNNs can use their internal memory to process arbitrary sequences of inputs. This makes them applicable to tasks such as unsegmented connected handwriting recognition, where they have achieved the best known results.[1] Architectures[edit] Fully recurrent network[edit] This is the basic architecture developed in the 1980s: a network of neuron-like units, each with a directed connection to every other unit. For supervised learning in discrete time settings, training sequences of real-valued input vectors become sequences of activations of the input nodes, one input vector at a time. Hopfield network[edit] The Hopfield network is of historic interest although it is not a general RNN, as it is not designed to process sequences of patterns. Related:  Machine Learning

Cellular neural network In computer science and machine learning, cellular neural networks (CNN) are a parallel computing paradigm similar to neural networks, with the difference that communication is allowed between neighbouring units only. Typical applications include image processing, analyzing 3D surfaces, solving partial differential equations, reducing non-visual problems to geometric maps, modelling biological vision and other sensory-motor organs. CNN architecture[edit] Due to their number and variety of architectures, it is difficult to give a precise definition for a CNN processor. Cells are defined in a normed space, commonly a two-dimensional Euclidean geometry, like a grid. Most CNN architectures have cells with the same relative interconnect, but there are applications that require, Multiple-Neighborhood-Size CNN (MNS-CNN), consisting of spatially variant topology. Literature review[edit] There are several overviews of CNN processors. Related processing architectures[edit] Model of computation[edit]

Artificial neural network An artificial neural network is an interconnected group of nodes, akin to the vast network of neurons in a brain. Here, each circular node represents an artificial neuron and an arrow represents a connection from the output of one neuron to the input of another. For example, a neural network for handwriting recognition is defined by a set of input neurons which may be activated by the pixels of an input image. After being weighted and transformed by a function (determined by the network's designer), the activations of these neurons are then passed on to other neurons. This process is repeated until finally, an output neuron is activated. This determines which character was read. Like other machine learning methods - systems that learn from data - neural networks have been used to solve a wide variety of tasks that are hard to solve using ordinary rule-based programming, including computer vision and speech recognition. Background[edit] History[edit] Farley and Wesley A. Models[edit] or both

Neural Network Applications An Artificial Neural Network is a network of many very simple processors ("units"), each possibly having a (small amount of) local memory. The units are connected by unidirectional communication channels ("connections"), which carry numeric (as opposed to symbolic) data. The units operate only on their local data and on the inputs they receive via the connections. The design motivation is what distinguishes neural networks from other mathematical techniques: A neural network is a processing device, either an algorithm, or actual hardware, whose design was motivated by the design and functioning of human brains and components thereof. There are many different types of Neural Networks, each of which has different strengths particular to their applications. The abilities of different networks can be related to their structure, dynamics and learning methods. 2.0 Applications There are abundant materials, tutorials, references and disparate list of demos on the net.

Machine Learning Project at the University of Waikato in New Zealand Feed-forward Feedforward may refer to: Dimensionality reduction In machine learning and statistics, dimensionality reduction or dimension reduction is the process of reducing the number of random variables under consideration,[1] and can be divided into feature selection and feature extraction.[2] Feature selection[edit] Feature extraction[edit] The main linear technique for dimensionality reduction, principal component analysis, performs a linear mapping of the data to a lower-dimensional space in such a way that the variance of the data in the low-dimensional representation is maximized. Principal component analysis can be employed in a nonlinear way by means of the kernel trick. An alternative approach to neighborhood preservation is through the minimization of a cost function that measures differences between distances in the input and output spaces. Dimension reduction[edit] See also[edit] Notes[edit] Jump up ^ Roweis, S. References[edit] Fodor,I. (2002) "A survey of dimension reduction techniques". External links[edit]

Backpropagation Backpropagation, an abbreviation for "backward propagation of errors", is a common method of training artificial neural networks. From a desired output, the network learns from many inputs, similar to the way a child learns to identify a dog from examples of dogs. It is a supervised learning method, and is a generalization of the delta rule. It requires a dataset of the desired output for many inputs, making up the training set. This article provides details on how backpropagation works. Motivation[edit] Summary[edit] The backpropagation learning algorithm can be divided into two phases: propagation and weight update. Phase 1: Propagation[edit] Each propagation involves the following steps: Phase 2: Weight update[edit] For each weight-synapse follow the following steps: Multiply its output delta and input activation to get the gradient of the weight.Subtract a ratio (percentage) of the gradient from the weight. Repeat phase 1 and 2 until the performance of the network is satisfactory. ) where and

Online machine learning Online machine learning is used in the case where the data becomes available in a sequential fashion, in order to determine a mapping from the dataset to the corresponding labels. The key difference between online learning and batch learning (or "offline" learning) techniques, is that in online learning the mapping is updated after the arrival of every new datapoint in a scalable fashion, whereas batch techniques are used when one has access to the entire training dataset at once. Online learning could be used in the case of a process occurring in time, for example the value of a stock given its history and other external factors, in which case the mapping updates as time goes on and we get more and more samples. Ideally in online learning, the memory needed to store the function remains constant even with added datapoints, since the solution computed at one step is updated when a new datapoint becomes available, after which that datapoint can then be discarded. , where on . , such that .

Introduction to Neural Networks j.a.bullinaria@cs.bham.ac.uk I no longer teach this module, but this web-page is now sufficiently widely used that I will leave it in place. It contains all the overheads, handouts, and exercise sheets used in the lectures, details about the continuous assessment and examination, and so on, for the academic year 2004/5. Lecture Timetable and Handouts Here's an outline of the module structure and lecture timetable. Aims, Learning Outcomes and Assessment For formal details about the aims, learning outcomes and assessment you should look at the official Module Description Page and Syllabus Page. There are two components to the assessment of this module: A two hour examination (70%) and a continuous assessment by mini-project report (30%). A series of exercise sheets, largely based on recent past examination questions, will give an idea of the standard and type of questions you can expect in this year's examination. The Continuous Assessment Mini-Project Recommended Books and Links

History of the Perceptron History of the Perceptron The evolution of the artificial neuron has progressed through several stages. The roots of which, are firmly grounded within neurological work done primarily by Santiago Ramon y Cajal and Sir Charles Scott Sherrington . Working from the beginnings of neuroscience, Warren McCulloch and Walter Pitts in their 1943 paper, "A Logical Calculus of Ideas Immanent in Nervous Activity," contended that neurons with a binary threshold activation function were analogous to first order logic sentences. The McCulloch-Pitts neuron worked by inputting either a 1 or 0 for each of the inputs, where 1 represented true and 0 false. This table shows the basic “and” function such that, if x1 and x2 are both false, then the output of combining these two will also be false. This follows also for the “or” function, if we switch the threshold value to 1. One of the difficulties with the McCulloch-Pitts neuron was its simplicity. The activation function then becomes: x = f(b)

Technology Review: Blogs: TR Editors&#039; blog: Robots &#039;Evolve&#039; the Ability to Deceive Researchers at the Ecole Polytechnique Fédérale de Lausanne in Switzerland have found that robots equipped with artificial neural networks and programmed to find “food” eventually learned to conceal their visual signals from other robots to keep the food for themselves. The results are detailed in an upcoming PNAS study. The team programmed small, wheeled robots with the goal of finding food: each robot received more points the longer it stayed close to “food” (signified by a light colored ring on the floor) and lost points when it was close to “poison” (a dark-colored ring). Each robot could also flash a blue light that other robots could detect with their cameras. “Over the first few generations, robots quickly evolved to successfully locate the food, while emitting light randomly. The team “evolved” new generations of robots by copying and combining the artificial neural networksof the most successful robots.

Restricted Boltzmann machine Diagram of a restricted Boltzmann machine with three visible units and four hidden units (no bias units). A restricted Boltzmann machine (RBM) is a generative stochastic neural network that can learn a probability distribution over its set of inputs. RBMs were initially invented under the name Harmonium by Paul Smolensky in 1986,[1] but only rose to prominence after Geoffrey Hinton and collaborators invented fast learning algorithms for them in the mid-2000s. RBMs have found applications in dimensionality reduction,[2] classification,[3] collaborative filtering, feature learning[4] and topic modelling.[5] They can be trained in either supervised or unsupervised ways, depending on the task. Restricted Boltzmann machines can also be used in deep learning networks. In particular, deep belief networks can be formed by "stacking" RBMs and optionally fine-tuning the resulting deep network with gradient descent and backpropagation.[7] Structure[edit] and visible unit for the visible units and where