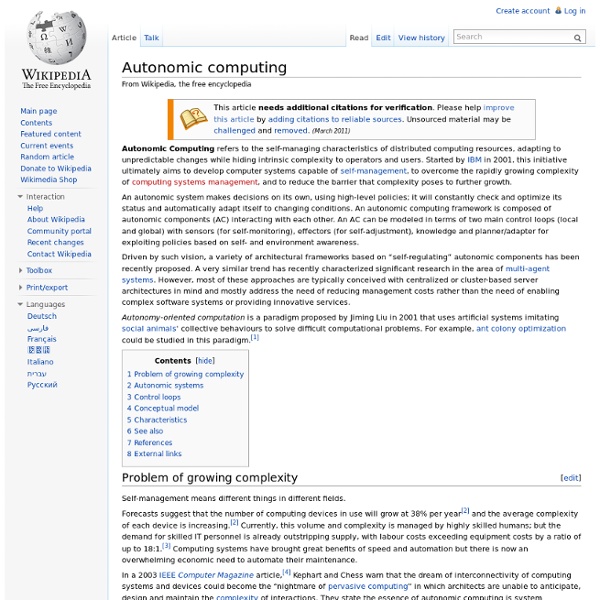 The system makes decisions on its own, using high-level policies; it will constantly check and optimize its status and automatically adapt itself to changing conditions. An autonomic computing framework is composed of autonomic components (AC) interacting with each other. An AC can be modeled in terms of two main control loops (local and global) with sensors (for self-monitoring), effectors (for self-adjustment), knowledge and planner/adapter for exploiting policies based on self- and environment awareness. Driven by such vision, a variety of architectural frameworks based on “self-regulating” autonomic components has been recently proposed. A very similar trend has recently characterized significant research in the area of multi-agent systems. Autonomy-oriented computation is a paradigm proposed by Jiming Liu in 2001 that uses artificial systems imitating social animals' collective behaviours to solve difficult computational problems. Problem of growing complexity[edit] Automatic Aware

Simulated reality Simulated reality is the hypothesis that reality could be simulated—for example by computer simulation—to a degree indistinguishable from "true" reality. It could contain conscious minds which may or may not be fully aware that they are living inside a simulation. This is quite different from the current, technologically achievable concept of virtual reality. Virtual reality is easily distinguished from the experience of actuality; participants are never in doubt about the nature of what they experience. Simulated reality, by contrast, would be hard or impossible to separate from "true" reality. There has been much debate over this topic, ranging from philosophical discourse to practical applications in computing. Types of simulation[edit] Brain-computer interface[edit] Virtual people[edit] In a virtual-people simulation, every inhabitant is a native of the simulated world. Arguments[edit] Simulation argument[edit] 1. 2. 3. Relativity of reality[edit] Computationalism[edit] Dreaming[edit]

Autonomous agent An autonomous agent is an intelligent agent operating on an owner's behalf but without any interference of that ownership entity. An intelligent agent, however appears according to a multiply cited statement in a no longer accessible IBM white paper as follows: Intelligent agents are software entities that carry out some set of operations on behalf of a user or another program with some degree of independence or autonomy, and in so doing, employ some knowledge or representation of the user's goals or desires. Non-biological examples include intelligent agents, autonomous robots, and various software agents, including artificial life agents, and many computer viruses. Biological examples are not yet defined. References[edit] External links[edit] See also[edit]

D-Wave Systems D-Wave Systems, Inc. is a quantum computing company, based in Burnaby, British Columbia. On May 11, 2011, D-Wave System announced D-Wave One, labeled "the world's first commercially available quantum computer," operating on a 128 qubit chip-set[1] using quantum annealing [2][3][4][5] to solve optimization problems. In May 2013 it was announced that a collaboration between NASA, Google and the Universities Space Research Association (USRA) launched a Quantum Artificial Intelligence Lab based on the D-Wave Two 512 qubit quantum computer that would be used for research into machine learning, among other fields of study.[6] The D-Wave One was built on early prototypes such as D-Wave's Orion Quantum Computer. Technology description[edit] D-Wave maintains a list of peer-reviewed technical publications on their website, authored by D-Wave scientists and by third party researchers. History[edit] Orion prototype[edit] According to Dr. 2009 Google demonstration[edit] D-Wave One computer system[edit]

Bionics Bionics (also known as bionical creativity engineering) is the application of biological methods and systems found in nature to the study and design of engineering systems and modern technology.[citation needed] The transfer of technology between lifeforms and manufactures is, according to proponents of bionic technology, desirable because evolutionary pressure typically forces living organisms, including fauna and flora, to become highly optimized and efficient. A classical example is the development of dirt- and water-repellent paint (coating) from the observation that the surface of the lotus flower plant is practically unsticky for anything (the lotus effect). Ekso Bionics is currently developing and manufacturing intelligently powered exoskeleton bionic devices that can be strapped on as wearable robots to enhance the strength, mobility, and endurance of soldiers and paraplegics. The term "biomimetic" is preferred when reference is made to chemical reactions. History[edit]

Aubrey de Grey Aubrey David Nicholas Jasper de Grey (/dəˈɡreɪ/; born 20 April 1963[5])[6] is an English author and theoretician in the field of gerontology and the Chief Science Officer of the SENS Research Foundation. He is editor-in-chief of the academic journal Rejuvenation Research, author of The Mitochondrial Free Radical Theory of Aging (1999) and co-author of Ending Aging (2007). He is known for his view that medical technology may enable human beings alive today to live to lifespans far in excess of any existing authenticated cases. Early life and education[edit] De Grey was born and brought up in London, England.[12] He told The Observer that he never knew his father, and that his mother, an artist, encouraged him in the areas she herself was the weakest: science and mathematics.[3] He was educated at Sussex House School[13] and Harrow School. Career[edit] After graduation in 1985, de Grey joined Sinclair Research Ltd as an artificial intelligence and software engineer. Strategies[edit]