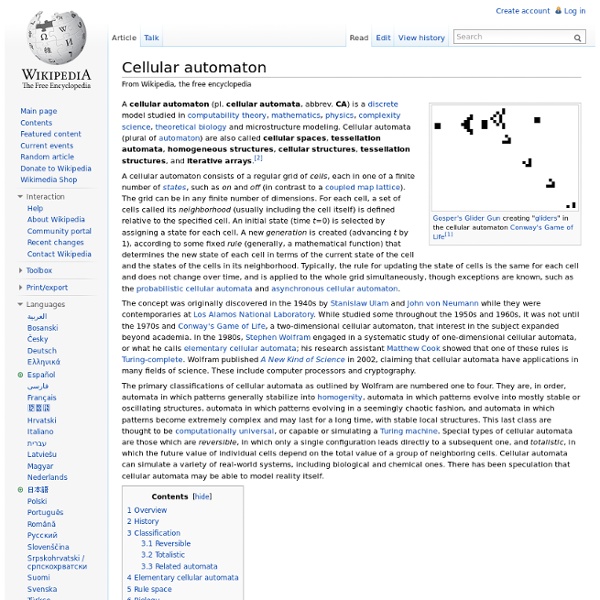 The concept was originally discovered in the 1940s by Stanislaw Ulam and John von Neumann while they were contemporaries at Los Alamos National Laboratory. While studied by some throughout the 1950s and 1960s, it was not until the 1970s and Conway's Game of Life, a two-dimensional cellular automaton, that interest in the subject expanded beyond academia. In the 1980s, Stephen Wolfram engaged in a systematic study of one-dimensional cellular automata, or what he calls elementary cellular automata; his research assistant Matthew Cook showed that one of these rules is Turing-complete. Wolfram published A New Kind of Science in 2002, claiming that cellular automata have applications in many fields of science. These include computer processors and cryptography. The primary classifications of cellular automata as outlined by Wolfram are numbered one to four. Overview[edit] A torus, a toroidal shape Cellular automata are often simulated on a finite grid rather than an infinite one. History[edit]

Bees algorithm In computer science and operations research, the Bees Algorithm is a population-based search algorithm which was developed in 2005.[1] It mimics the food foraging behaviour of honey bee colonies. In its basic version the algorithm performs a kind of neighbourhood search combined with global search, and can be used for both combinatorial optimization and continuous optimization. The only condition for the application of the Bees Algorithm is that some measure of topological distance between the solutions is defined. The effectiveness and specific abilities of the Bees Algorithm have been proven in a number of studies. [2][3] The Bees Algorithm is inspired by the foraging behaviour of honey bees. Honey bees foraging strategy in nature[edit] A colony of honey bees can extend itself over long distances (over 14 km) [4] and in multiple directions simultaneously to harvest nectar or pollen from multiple food sources (flower patches). The Bees Algorithm[edit] Applications[edit] See also[edit]

Why the Theory of Evolution Exists Introduction to the Mathematics of Evolution Chapter 1 Why the Theory of Evolution Exists "In the preface to the proceedings of the [Wistar] symposium, Dr. Kaplan commented about the importance of mathematics in such matters as theorizing about origins [of life]. He said that to construct a history of thought without profound study of the mathematical ideas of successive efforts is comparable to omitting the part of Ophelia from Shakespeare's play, Hamlet" 's Enigma, Luther D. Introduction Many times students hear that the theory of evolution is a "proven fact of science." The reality is that the theory of evolution is NOT a proven fact of science. For example, the theory of evolution requires that life be created from simple chemicals. Such a conversion has never been demonstrated and such a conversion has never been proven to be possible. Even the simplest life on earth, which does not require a host, is far too complex to form by a series of accidents. Science Phillip E. "Naturalism" (Mr.

The Probability of Evolution Introduction to the Mathematics of Evolution Chapter 15 The Probability of Evolution "A statistician is a person who stands in a bucket of ice water, sticks their head in an over and says: 'on average, I feel fine!'" K. Gene Complexes In prior chapters we talked about genes and DNA, among other things. A gene would be useless without the rest of the gene complex. No one really knows what the average number of nucleotide pairs (generally just referred to as "nucleotides") are in the average "gene complex." "While only a small fraction of the [DNA] directly encodes for proteins, every protein-encoding sequence is embedded within other functional sequences that regulate the expression of such proteins. Genetic Entropy & The Mystery of the Genome, page 38 The numbers he quotes are for humans. Before getting into human evolution, let us apply the concept of "gene complex" to the "first living cell." The Probability of the "First Living Cell" What if we randomly modified pure gibberish? And so on.

Collective intelligence: Ants and brain's neurons CONTACT: Stanford University News Service (415) 723-2558 Collective intelligence: Ants and brain's neurons STANFORD - An individual ant is not very bright, but ants in a colony, operating as a collective, do remarkable things. A single neuron in the human brain can respond only to what the neurons connected to it are doing, but all of them together can be Immanuel Kant. That resemblance is why Deborah M. Gordon, Stanford University assistant professor of biological sciences, studies ants. "I'm interested in the kind of system where simple units together do behave in complicated ways," she said. No one gives orders in an ant colony, yet each ant decides what to do next. For instance, an ant may have several job descriptions. This kind of undirected behavior is not unique to ants, Gordon said. Gordon studies harvester ants in Arizona and, both in the field and in her lab, the so-called Argentine ants that are ubiquitous to coastal California. "Ants communicate by chemicals," she said. -jns/ants-

Life Science Technologies: Sanger Who? Sequencing the Next Generation In November 2008 Elaine Mardis of Washington University in St. Louis and colleagues published the complete genome sequence of an individual with acute myeloid leukemia. Coming just a few years after the decade-long, multibillion dollar Human Genome Project, the paper was remarkable on several levels. For one thing, the team sequenced two human genomes, both cancerous and normal, some 140 billion bases in all. By Jeffrey M. Inclusion of companies in this article does not indicate endorsement by either AAAS or Science, nor is it meant to imply that their products or services are superior to those of other companies. Elaine Mardis's acute myeloid leukemia work comprised about nine months of collecting 32-base snippets at the rate of about a billion bases per instrument every five days, with five instruments running in parallel, she says. The instruments in question, Illumina Genome Analyzers, are one of a cadre of so-called next-generation DNA sequencers. Out with the Old± The Longest Read

Swarm intelligence Swarm intelligence (SI) is the collective behavior of decentralized, self-organized systems, natural or artificial. The concept is employed in work on artificial intelligence. The expression was introduced by Gerardo Beni and Jing Wang in 1989, in the context of cellular robotic systems.[1] The application of swarm principles to robots is called swarm robotics, while 'swarm intelligence' refers to the more general set of algorithms. Example algorithms[edit] Particle swarm optimization[edit] Ant colony optimization[edit] Artificial bee colony algorithm[edit] Artificial bee colony algorithm (ABC) is a meta-heuristic algorithm introduced by Karaboga in 2005,[5] and simulates the foraging behaviour of honey bees. Bacterial colony optimization[edit] The algorithm is based on a lifecycle model that simulates some typical behaviors of E. coli bacteria during their whole lifecycle, including chemotaxis, communication, elimination, reproduction, and migration.[6] Differential evolution[edit]