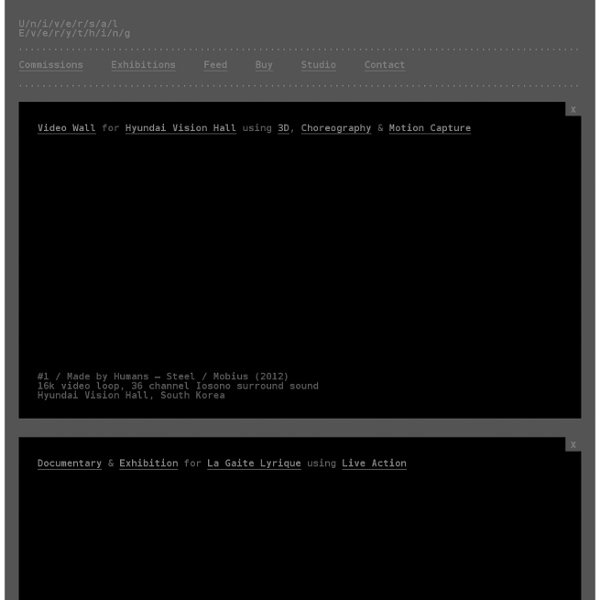 Log In Declaration or Deception? The C.I.A., fighting the Cold War, had acted out of worries about Mr. Castro’s increasingly open Communist connections. Massive Digital Creative Agency In 2012 our Creative Partner, as a result of recognition obtained by this international community, will represent us in the jury of Awwward. We won an FWA! Our site was once again awarded and this time it was something really big, with an award that is one of the major in digital area. Massive developed the portal for the new magazine "Turbilhão", launched by Tempus Distribuição. This nomination by the distinguished international community turns Massive into the only Portuguese company to date with three of these awards. ART, PRICE AND VALUE - Contemporary Art and the Market (Part 1) On a sunny afternoon in Florence i visited one of those exhibitions which lingers in your mind for days because of the questions and debates they set in motion inside your brain. The theme of the Art, Price and Value was selected a long time ago but given the current frenzy about the state of the art market it could not have been more timely nor thought-provoking. The exhibition, which closed a few days ago at the Strozzina cultural Center, explored how the economy has come to manipulate art production, affecting its every aspects. Bethan Huws, Untitled, 2006, alluminio, vetro, lettere in gomma e plastica, courtesy the artist Contemporary art plays an increasingly prominent role in our culture, with some of its most visible figures reaching a status that can only be compared to the one of fashion designers, Hollywood actors and pop stars. Many people have come to associate contemporary art with tactics made of shock, awe and circus.

Press – 4D Immersive 4D creative are proud to announce the opening of two immersive spaces at Alder Hey Children’s Hospital in Liverpool. The spaces have been inspired by the life of Joseph Mitchell and have been funded by a generous grant from Thomas Cooke Children’s Charity. Joseph was looked after by Alder Hey but sadly lost his fight in 2012 at the age of 2 and a half.

Africa In The New Century Italian Version Originally presented in a lecture series and later compiled in The Philosophy of History (Germany, 1837), Hegel adds: “The Negro … exhibits the natural man in his completely wild and untamed state. We must lay aside all thought of reverence and morality—all that we call feeling—if we would rightly comprehend him. There is nothing harmonious with humanity to be found in this type of character.” CCCS - ART, PRICE AND VALUE The exhibition examines the increased links between contemporary art and the international market. The power now exerted by the economy on political, social and cultural life has extended its hold on art production so that the whole system is undergoing a complete transformation in response to the demands of an increasingly global market. Contemporary art plays an ever more prominent role in our culture.

GraphicDesign& outline three projects that successfully support and impact mental wellbeing Can Graphic Design Save Your Life? was published earlier this year to coincide with GraphicDesign&’s exhibition of the same name that is currently on show at the Wellcome Collection. It examines the varied and vital relationship between graphic design and health, focussing on work that demonstrates how communication strategies and visual languages are employed to persuade, inform and ultimately protect. The book asks its contributors to respond to the title question and demonstrates how graphic design impacts what we notice, what we understand and the actions we take. “In short, we hope that readers of the book will think the answer to the question is: yes!” We spoke to GraphicDesign& and asked them to consider the role of graphic design specifically in the world of mental health.

MOVEMENT, MEMORY & THE SENSES IN SOUNDSCAPE STUDIES – Sensory Studies Jennifer Schine This paper will explore how the practice of soundwalking can be a tool for memory retrieval. I ask: How are memories created and remembered in the mind and felt within the body? What happens to our perception of self, home, and knowing as we move through spaces and places of significance? I aim to explore the subject of memory and movement within the context of soundscape studies; these notions require an understanding of how we “hear” the past and re‐evoke our acoustic memories as we move and act through our environment. Traditional methods for recalling the past involve mainly visual cues and focus on materiality (Bäckman, Small, Wahlin & Larsson 2000) —we look to photographs and hold personal objects, etc.

Eight of the most thought-provoking design responses to mental health For World Mental Health Day, we've rounded up eight designs that address the increasingly prevalent topic of mental wellbeing, including a hand-held anxiety reducer and a metaphorical gun that fires tears. Mindnosis by Sara Lopez Ibanez Having had her own negative experiences with mental health services, design graduate Sara Lopez Ibanez created a self-assessment kit to support those with similar issues. After researching the UK's approach to mental health services and the various types of therapy on offer, Ibanez concluded that what patient's struggled with the most was the initial communication with their doctors. Her Mindnosis kit, therefore, allows users to discover the type of help they need, and where they can get it from.

princeMio Bright beams cut the room, replacing complete darkness. They glow in threatening white as they reach to the ceiling in mathematical precision. Two men step into the room as scan matrices sense their bodies. They become sliced into their components, rearranged and manipulated by light till the moment they decide to break the dictatorship of machine and find nothing left – but themselves. Pow is a piece by the urban choreographers Raphael Hillebrand and Christian Mio Loclair. Event - VES & Creative Heads Career Fair Date: Saturday, 25 June 2011 - 9:00am - 5:00pm VFX Career Fair & Workshops Presented By VES And Creative Heads

“We’re on a mission to show what graphic design can do” Can graphic design save your life? This is the question posed by Wellcome Collection’s latest exhibition, which explores the impact of graphics and advertising on healthcare. The show, which was conceptualised by designer Lucienne Roberts, looks at how design has been used both to help and to harm. It explores everything from classic, Swiss-style pharmaceutical packaging and hospital interiors, through to pro-smoking posters of the past, and HIV awareness campaigns. Now, a book has been released under the same name, exploring the same topic.