Uk.businessinsider. The Art of the Amateur Online Review. Photo When Camilla Vásquez and her husband, Rubén, went to a dealership to shop for a new car last June, they found the salesman affable and low-key. 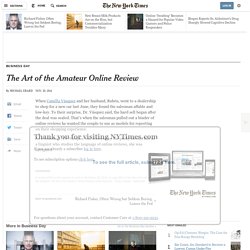 To their surprise, Dr. Vásquez said, the hard sell began after the deal was sealed. That’s when the salesman pulled out a binder of online reviews he wanted the couple to use as models for reporting on their shopping experience. #illridewithyou: hashtag offers solidarity with Sydney's Muslims after siege. Millennials and the Age of Tumblr Activism. Photo On a recent day, the feed of a Tumblr blog called Black Culture featured a drawing of Lupita Nyong’o, a video of a protest at William Paterson University and a text that read, “black lives > white feelings.” 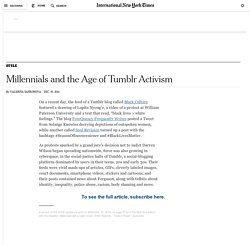 The blog FreeQuency Frequently Writes posted a Tweet from Solange Knowles decrying depictions of outspoken women, while another called Soul Revision turned up a post with the hashtags #SeasonOfInconvenience and #BlackLivesMatter. As protests sparked by a grand jury’s decision not to indict Darren Wilson began spreading nationwide, furor was also growing in cyberspace, in the social-justice halls of Tumblr, a social-blogging platform dominated by users in their teens, 20s and early 30s. Their feeds were vivid mash-ups of articles, GIFs, cleverly labeled images, court documents, smartphone videos, stickers and cartoons, and their posts contained news about Ferguson, along with tidbits about identity, inequality, police abuse, racism, body shaming and more. Ms. Ms. Mr. Photo Ms. Best New Podcasts 2015: 9 Shows To Listen To In The New Year. This has been a great year for podcasts. 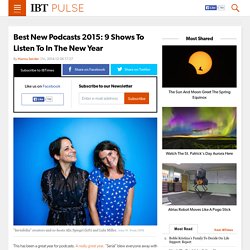 A really great year. "Serial" blew everyone away with its 12-part investigation, PRX's podcast collective Radiotopia raised $620,000 in its kickstarter campaign, and articles in New York magazine, the New York Times and International Business Times hailed this as a golden age of podcasts. Alex Blumberg, former producer for "This American Life" and "Planet Money," raised $275,000 in investments through Alphaworks for a podcast company -- and is documenting the process in the podcast "Startup. " Other great podcasts popped up in 2014: "Reasonably Sound," from the Infinite Guest network; "Criminal," now on Radiotopia; WNYC's "Death, Sex & Money"; “The Dollop,” with Dave Anthony and Gareth Reynolds; and WFMU's "Why Oh Why," which just celebrated its one-year anniversary.

So yeah, 2014 was a great year for podcasts. In its first Kickstarter goal, Radiotopia promised to add four new shows to its roster if it reached $400,000. Collaborative mapping project will chart the Amazon's rivers. Crowdsourced mapping efforts are helpful in many places, but they're most useful in corners of the globe where even the professional maps are incomplete -- you can address gaps in coverage that might be difficult for distant observers to fill. 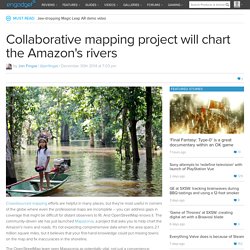 And OpenStreetMap knows it. The community-driven site has just launched Mapazonia, a project that asks you to help chart the Amazon's rivers and roads. It's not expecting comprehensive data when the area spans 2.1 million square miles, but it believes that your first-hand knowledge could put missing towns on the map and fix inaccuracies in the shoreline. The OpenStreetMap team sees Mapazonia as potentially vital, not just a convenience. Environmental groups and governments can use the improved info to track development in the region, and it could save lives if there's a natural disaster in an otherwise uncharted area. [Image credit: AP Photo/Marcio Jose Sanchez] Why Even the Worst Bloggers Are Making Us Smarter. When you can resolve multiples and connect people with similar obsessions, ideas flourish and multiply. 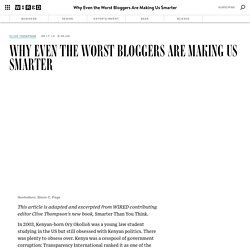 Scientists have for centuries intuited the power of resolving multiples, and it’s part of the reason that in the 17th century, they began publishing scientific journals and eventually setting standards for citing the work of other scientists. Scientific journals and citation were a successful attempt to create a worldwide network, a mechanism for not just thinking in public but doing so in a connected way. Today we have something that works in the same way but for everyday people: the Internet, which encourages public thinking and resolves multiples on a much larger scale and at a pace more dementedly rapid. It’s now the world’s most powerful engine for putting heads together. Failed networks kill ideas, but successful ones trigger them.

As an example of this, consider what happened next to Ory Okolloh. Within days, Kenyans had input thousands of incidents of electoral violence. Barack Obama on extremism: 'terrorists are targeting young people through Twitter' Social Media in the Era of ISIS. Printer-friendly version here. 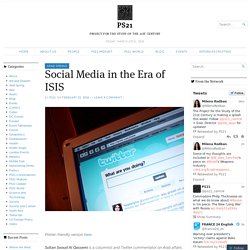 Sultan Sooud Al Qassemi is a columnist and Twitter commentator on Arab affairs. His columns on the Middle East have appeared in The Financial Times, The New York Times online, Foreign Policy and Open Democracy. Rising in prominence during the Arab Spring, Sultan’s tweets became a major news source, rivalling the major news networks at the time, until Time magazine listed him in the ‘140 Best Twitter Feeds of 2011’. Sultan Al Qassemi is a 2014-2016 MIT Media Labs Director’s Fellow and member of PS21’s International Advisory Group. Follow him on Twitter @sultanalqassemi. Even before the Arab Spring, activists took to social media to disseminate information in an atmosphere where the narrative was tightly controlled by the state.

In November 2007 YouTube shut down the account of Egyptian activist Wael Abbas after he posted a video showing police brutality for containing “inappropriate material.”