Group vs Network (and communities)

Groups and Networks Downes 06. It wasn't of any particular interest to the people at the conference in Auckland but this drawing represents my major take-away from the last week travelling (with a group) about this country. 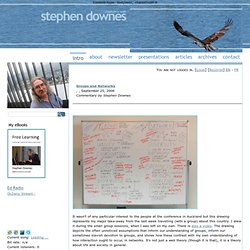 I drew it during the small group sessions, when I was left on my own. There is also a video. The drawing depicts the often unnoticed assumptions that inform our understanding of groups, inform our sometimes slavish devotion to groups, and shows how these contrast with my own understanding of how interaction ought to occur, in networks. It's not just a web theory (though it is that), it is a theory about life and society in general.

Anyhow, I'm done with the travelling road show. Total: 22041 Enclosure: On Groups, Networks and Collectives Anderson 07. Jon Dron and I have been having fun developing a paper for ELearn in which we’ve been wrestling with the distinctions between three granularities of social software. 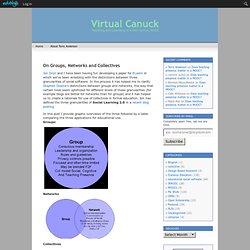 In the process it has helped me to clarify Stephen Downe’s distinctions between groups and networks, the way that certain tools seem optimized for different levels of these granularities (for example blogs are better for networks than for groups) and it has helped us to create a rationale for use of collectives in formal education. Jon has defined the three granularities of Social Learning 2.0 in a recent blog posting. In this post I provide graphic overviews of the three followed by a table comparing the three applications for educational use. Groups: Networks. Learning with Networks Anderson 07. A recent paper by Jon Dron has stimulated my thinking about social learning from two perspectives. 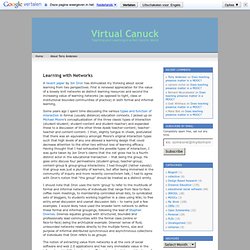 On Groups, Networks and Collectives. Is collective the right name? Jon Dron and I were pleased to see Stephen Downes’ comments on our proposed “Model of the Many“. 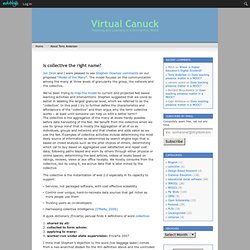 The model focuses on the communication among the many at three levels of granularity the group, the network and the collective. We’ve been trying to map the model to current and projected Net based learning activities and interventions. Stephen suggested that we could do better in labeling the largest granular level, which we referred to as the “collective’. Groups networks and collectives – more! Scott Wilson notes some concerns with the “lack of clarity” between the three entities of the Many that Jon Dron and I have been discussing and blogging about. 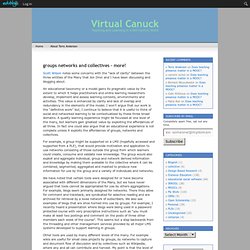 An educational taxonomy or a model gains its pragmatic value by the extent to which it helps practitioners and online learning researchers develop, implement and assess learning contexts, environments and activities. This value is enhanced by clarity and lack of overlap and redundancy in the elements of the model. I won’t argue that our work is the “definitive work” but, I continue to believe that it is useful to think of social and networked learning to be contextualized by these three broad domains.

A quality learning experience might be focussed at one level of the many, but learners gain greatest value by exploiting the affordances of all three. In fact one could also argue that an educational experience is not complete unless it exploits the affordances of groups, networks and collectives. Naming aggregations. David Snowden in an interesting post titled Aggregative or emergent identity? 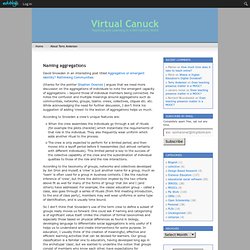 Rethinking Communities (thanks for the pointer Stephen Downes ) argues that we need more discussion on the aggregations of individuals to note the emergent capacity of aggregations – beyond those of individual members being connected. He notes the confusion and multiple meanings around aggregations such as communities, networks, groups, teams. crews, collectives, cliques etc. etc. While acknowledging the need for further discussion, I don’t think his suggestion of adding ‘crews’ to the lexicon of aggregations helps us much. According to Snowden a crew’s unique features are: Community@Brighton: 's blog: Crew cuts. An interesting discussion has been developing around notions of groups, communities, aggregates, crews, teams, collectives, etc etc. 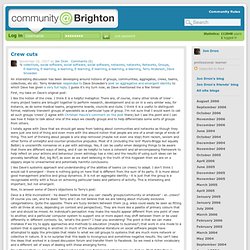 Terry Anderson responded to Dave Snowden's post on aggregative and emergent identity to which Dave has given a very full reply. I guess it's my turn now, as Dave mentioned me a few times! First, my take on Dave's original post: I like the notion of the crew. Aggregative or emergent identity?  Rethinking Communities. There is a lot of talk about communities and networks not only within KM, but in many other areas. 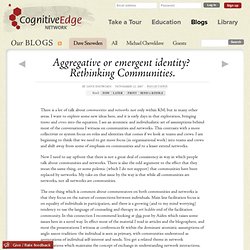 I want to explore some new ideas here, and it is early days in that exploration, bringing teams and crews into the equation. I see an atomistic and individualistic set of assumptions behind most of the conversations I witness on communities and networks. Aggregative or Emergent Identity? Rethinking Communities. Collectivism and Connectivism. Recent posts have gotten me thinking further about the “taxonomy of the many” groups/networks and collectives that Jon Dron and I have been interested in for the past year or so. 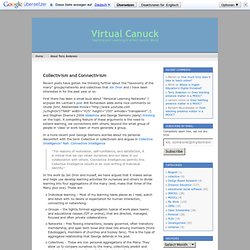 First there has been a small buzz about “Personal Learning Networks” I enjoyed Jim Lerman’s post Will Richardson adds some nice comments on Utube [kml_flashembed movie=" width="425" height="350" wmode="transparent" /] and Stephen Downe’s 2006 slideshow and George Siemens (early) thinking on the topic. A compelling feature of these arguments is the need to extend learning, via connections with others, beyond the small group of people in ‘class’ or work team or more generally a group. In a more recent post George Siemens worries about his personal discomfort with the term Collective or collectivism and argues in Collective Intelligence? Nah. Connective Intelligence. Collective Learning. Knowledge, and knowledge management has become increasingly critical to the successful functioning of an organisation. 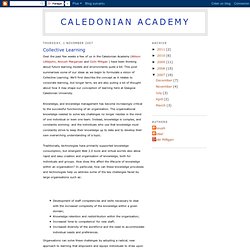 The organisational knowledge needed to solve key challenges no longer resides in the mind of one individual or even one team. Instead, knowledge is complex, and constantly evolving: and the individuals who use that knowledge must constantly strive to keep their knowledge up to date and to develop their own overarching understanding of a topic. Everything elearning. Learning Ecology, Communities, and Networks Extending the classroom George Siemens October 17, 2003. More Collective connections. My friend Jon Dron has finally nailed his own (and no doubt others) ideas about the collective nature of Wikipedia. His recent post notes: the individual actions that create most of the articles,the groups of administrative types who manage the overall infrastructure and set in place the algorithms that manage the look, feel and performance of the systemthe networks of mostly regular users responsible for maintenance and collaborative development of the articles and finally the way we minethe wiki as a collective resource.

I realize that some folks think this task of dividing and allocating ideas into categories is an arbitrary function that just gives rise to arguments (see for example Dave Snowden’s diatribe and his focus on ‘crews’.) Are you on the Bully watch? By Dave Snowden · November 25, 2007 · Polemic Virtual Canuck picks up my posting about crews, teams etc but takes issue with my position, I quote: So I don’t think that Snowden’s use of the term crew to define a subset of groups really moves us forward. It turns out that the author (Terry) along with one Jon Dron has already created a taxonomy of groups, networks and collectives which is more than adequate for the field. interestingly they quote my two statements on the unique features of crews in full. However their failure to take those features into account and their general assumptions about taxonomies indicate that either I did not explain myself well, or they are wedded to their three fold classification and do not want to brook any challenge.

Networks Versus Groups in Higher education. The following is a rather long and scholarly type post arguing for the use of Networks in addition to groups commonly employed in formal campus and distance education. The essay will probably find its way into a published paper or book chapter, but I thought I would post it here in case anyone has interest and especially comments. Thanks TerryBlending Groups and Networks in Higher Education A pervasive ‘buzz’ in education these days relates to development of ‘blended learning” (Garrison & Kanuka, 2004) . In most cases the ‘blending’ refers to developing educational programs that employ an appropriate mix of face-to-face and online activities. However, this use of the term implies that it is the tool rather than the activity that defines learning outcomes. Figure 1 illustrates these three social aggregations with the individual learner in the centre. Figure 1. Collectives, Borgs and Hive Mind. Jon Dron and I have been writing a book chapter on our “Taxonomy of the Many” – groups. networks and collectives.

In the process we’ve been thinking (again) about the challenge of the term collective to our individual sense of unique self. We continue to see applications evolve where data mining and aggregation of large numbers of Net activities, opinions, artifact organization and postings yields very interesting and useful results that can be used to guide decision making and increase effectiveness of Net activity for individual, group and network benefit. More on Groups versus Networks and Collectives. During my presentation to CK08 Stephen Downes challenged me to clarify if his distinctions between groups and networks matched my own. I had a little trouble determining exactly his criteria- as I am sure he has my own, but I did find a long speech he gave in New Zealand in 2006 titled Groups versus Networks : the class structure continues .

Later I found a shorter explication in the Moodle discussion associated with CCK08. Sets and Nets. If you are not involved in social computing, social network analysis, sociology or similarly network-focussed disciplines and interest groups, this is going to seem like a pretty odd thing to make a fuss about (surely this is all common sense) so you might want to look away now... Open Learning in Groups, Networks and Collectives. Can the Crowd Teach? About a year ago Jon Dron and I completed a chapter for the 2009 Handbook of Research on Social Software and Developing Community Ontologies edited by Stylianos Hatzipanagos, & Steven Warburton of King’s College London, UK.

Unfortunately the publishers, IGI choose to charge what I think is an exorbitant fee of $265 US per copy and they didn’t even provide a free copy for the chapter authors!! Comments on Promoting and assessing value communities and networks. Is there an equivalent of a persona for a group? Collective values. NL conference 10 Hot Seat E Wenger. I think there is a fundamental distinction between these 2 concepts.