Benefits Of PC Gaming Communities. Gamer communities: the positive side. "How does anybody find friends? 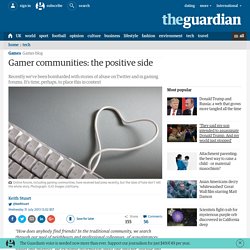 In the traditional community, we search through our pool of neighbours and professional colleagues, of acquaintances and acquaintances of acquaintances, in order to find people who share our values and interests. We exchange information about one another, disclose and discuss our mutual interests, and sometimes we become friends. Online Community Management: Communication Through Gamers. Online Community Management: Communication Through Gamers By Julien Wera [In this in-depth analysis, former MMO community liaison Wera (Flyff, Rappelz) analyzes the art and science of game community management, explaining that people may continue playing online games as much for the social community as the gameplay.] 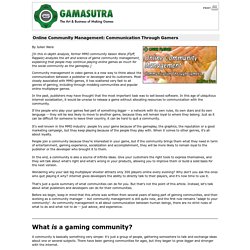 Community management in video games is a new way to think about the communication between a publisher or developer and its customers. Most closely associated with MMO games, it has scattered very fast to all genres of gaming, including through modding communities and popular online multiplayer games. In the past, publishers may have thought that the most important task was to sell boxed software. If the people who play your games feel part of something bigger -- a network with its own rules, its own stars and its own language -- they will be less likely to move to another game, because they will remain loyal to where they belong. Sense of Community in a Mediated World. Players of massive multi-player online games (MMOGs) find deep connections with other players, with 75 percent reporting becoming close friends with someone from the game. 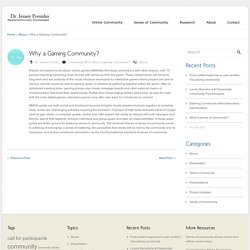 These relationships can become long-term and are products of the social structure developed by interactive games where players are able to discuss real-life issues as well as gaming goals. In addition to gathering together within the game, often at scheduled meeting times, gaming groups also create message boards and other external means of communication that build their relationships. Rather than encouraging solitary game play, as was the case with the early digital games, interactive games now offer new ways for individuals to connect. MMOG guilds are both social and functional because at higher levels players must join together to complete raids, which are challenging activities requiring the formation of groups of high-level characters that no longer need to gain levels or complete quests. 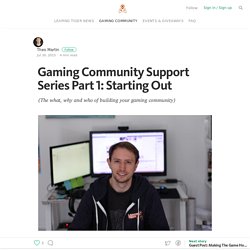 Something that’s more than a mish-mash of friends, more than a local guild for a particular game, a place where people can connect and do more than play. Well, you’ve come to the right place! Throughout this series I’m going to share with you my ups, downs, experiences and knowledge that has gone into making and supporting the gaming communities I’ve been part of over the years. Who am I? But enough about me, let’s focus on starting YOUR gaming community! Step 1: You’ve Got To Know ‘Why’Every good community has a reason for existing. So, what’s the reason for your community? As an example, here’s DotA 2 NZ’s reason for existence… Everything DotA 2 NZ does revolves around this core sentence!

It’s all about the gaming communities. By: Igor “Jason” Djuricic “If you want to go fast, go alone. 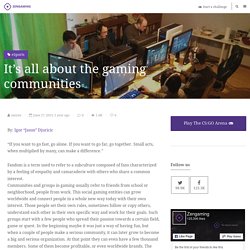 If you want to go far, go together. Small acts, when multiplied by many, can make a difference.” Fandom is a term used to refer to a subculture composed of fans characterized by a feeling of empathy and camaraderie with others who share a common interest. Communities and groups in gaming usually refer to friends from school or neighborhood, people from work. The ESA (The Entertainment Software Association) reports from 2014 say the average age of a video game player is 32 years and the number is slowly increasing. Keep connected: Clans, LAN Parties, Skype, Team Speak. The Influence of YouTube-Gaming-Content on the Community. The gaming industry is like a constantly evolving organism. 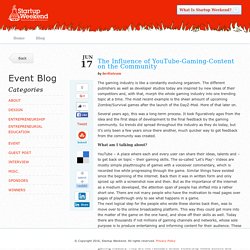 The different publishers as well as developer studios today are inspired by new ideas of their competitors and, with that, morph the whole gaming industry into one trending topic at a time. The most recent example is the sheer amount of upcoming Zombie/Survival games after the launch of the DayZ-Mod. More of that later on. Several years ago, this was a long-term process. It took figuratively ages from the idea and the first steps of development to the final feedback by the gaming community. What am I talking about? YouTube – A place where each and every user can share their ideas, talents and – to get back on topic – their gaming skills.

What is the industry doing and where does it go from here? The influence the gaming content has on the industry itself has different aspects to it. But as the progress of the aforementioned DayZ Mod has shown, there even is a way to get ideas for development. How can the industry use this trend? Project massive: A study of online communities.