Traductor de Google. Zurich Eco Lab: Design Observer. Ortoloco, which describes itself as "a laboratory for economic experiment", enables citizens to be involved actively in food growing as well as in the development of new distribution models. 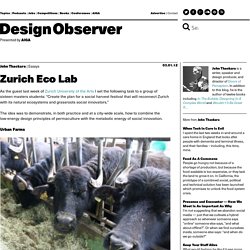 The cooperative works with "socially and ecologically oriented settlements", commercial kitchens, catering colleges and schools. The bread culture in Zurich, which dates back many hundreds of years, is especially healthy. The loaf shown above is made of wheat grown entirely within city limits. The latest arrival to the local bread scene is a new co-operative, Brotoloco, whose members make these especially elegant ovens by hand: Bogota, Colombia.

Socio Creativo. About the movement - Transition Network. EMUDE. JARDIN NOMADE : EMUDE. Posted by Christophe on Wednesday, April 3, 2013 · Leave a Comment How to transform an abandoned plot into a shared neighbourhood garden? 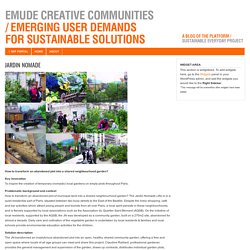 Key Innovation To inspire the creation of temporary (nomadic) local gardens on empty plots throughout Paris. Problematic background and context How to transform an abandoned plot of municipal land into a shared neighbourhood garden? MILIEUVRIENDELIJK TUINIEREN.NL : EMUDE. Posted by Christophe on Wednesday, April 3, 2013 · Leave a Comment environmental friendly gardening Key Innovation With help of information and tips in brochures and the website, people can use less or no herbicides at all to keep their garden healthy. 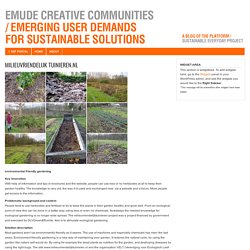 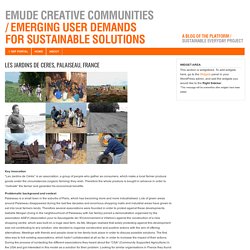 Therefore the whole produce is bought in advance in order to “motivate” the farmer and garantee his economical benefits. Problematic background and context Palaiseau is a small town in the suburbs of Paris, which has becoming more and more industrialised. Lots of green areas around Palaiseau disappeared during the last few decades and enormous shopping malls and industrial areas have grown to eat into local farmers lands. Therefore several associations were founded in order to protest against these developments. Solution description The association is inspired by “AMAP”, which have been well known for some years in the southern areas of France. Timeframe 1 year Development phase.

BIOMERCATINO: THE LITTLE ORGANIC MARKET.PDF : EMUDE. Posted by Christophe on Wednesday, April 3, 2013 · Leave a Comment A street market that sells organic products and promotes a healthy and environmentally responsible lifestyle. 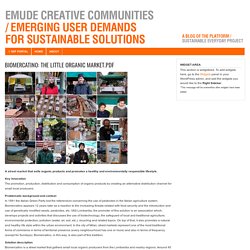 Key Innovation The promotion, production, distribution and consumption of organic products by creating an alternative distribution channel for small local producers. Problematic background and context In 1991 the Italian Green Party lost the referendum concerning the use of pesticides in the Italian agriculture system. Biomercatino appears 12 years later as a reaction to the increasing threats related with food security and the introduction and use of genetically modified seeds, pesticides, etc. VAS Lombardia, the promoter of this solution is an association which, develops projects and activities that discusses the use of biotechnology; the safeguard of local and traditional agriculture; environmental protection; pollution (water, air, soil, etc.), recycling and related topics.

NATURAL FOOD – SYSTEM NEAR THE ROADS : EMUDE. Posted by Christophe on Tuesday, April 2, 2013 · Leave a Comment Every townsman can find from her/his region between the city and the countryside a farm with who to communicate and socialise. 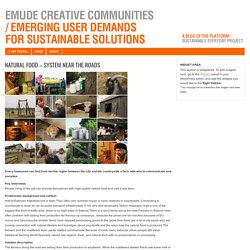 Key Innovation People living in the city can provide themselves with high-quality natural food and visit a real farm. Problematic background and context Half of Estonian ihabitants live in town.They often own summer house or have relatives in countryside. Solution description The farmers along the road are selling their farm production to wayfarers. While the roadfarers started first to ask some milk or some eggs to buy.

Timeframe this kind of relations have developed in time, starting in soviet period,very differently in different farms.In the folowing described case the actor visited mentioned farm 12 ago,and visites it every year every summer about twice a week. Revenue/costs model The custumer pays cash for the product in farm stright to farmer. SLOW FOOD IN POLAND : EMUDE. Posted by Christophe on Tuesday, April 2, 2013 · Leave a Comment Searching and choosing organic and processed food to distribute under one brand. 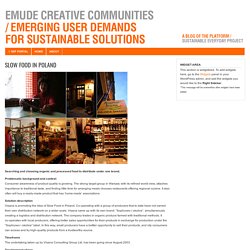 ÖKOSAHVER (ECO-PANTRY) : EMUDE. Posted by Christophe on Tuesday, April 2, 2013 · Leave a Comment manufacturing and selling the organic agriculture products Key Innovation The idea of the movement is to support ecologically pure and healthy lifestyle, which balances human and its surroundings. 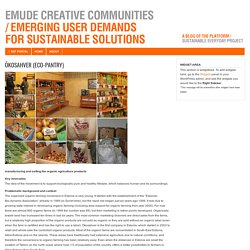 Problematic background and context The organized organic farming movement in Estonia is very young. It started with the establishment of the “Estonian Bio-dynamic Association” already in 1989 (in Soviet time), but the rapid rise began just six years ago 1999. It was due to growing state interest in developing organic farming (including area support for organic farming from year 2000).

Solution description Behind the idea are different people: professor from Institute of Plant Protection, director of Centre for Ecological Engineering, businessman and a leader of the alternative theatre Von Krahl. Timeframe The service has been obtained since January 2003 Revenue/costs model Ordering the foodbox to home costs 13 Euros.

Desis Network. DESIS Food Cluster. December 2014 Politecnico di Milano, Italy 2010 – 2013 POLIMI – DESIS Lab Feeding Milan is set in a Peri-urban region, a fringe area challenged by building speculation, where urban sprawl is blurring the boundaries between city and countryside and agriculture is suffering because it is no longer profitable. 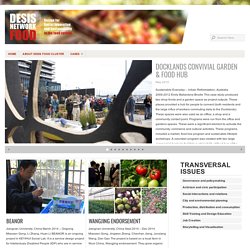 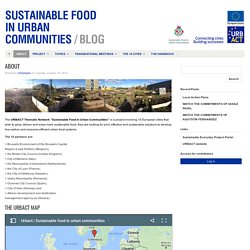