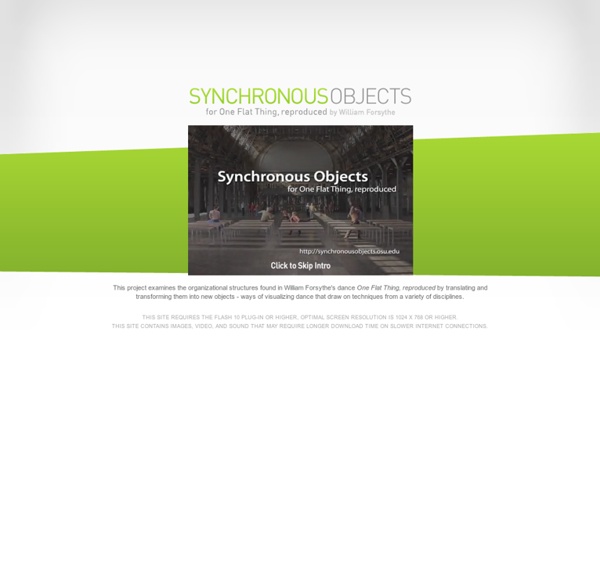 SynchronousObjects Blog Below we profile three final projects created in Professor Stephen Turk’s second year undergraduate installation class conducted during spring 2009 at the Knowlton School of Architecture at the Ohio State University. This studio deals with material fabrication, notation and fundamental representational skills. The images are from the students’ preliminary results from their research analysis and design investigations and the final installation in the Knowlton School of Architecture. 1. THE SCREEN MACHINE: Project team: Ross Hamilton, Heather Brandenburg, Sarah Simeon, Minyoung Kim. Ross Hamilton describes his intentions and methods in creating The Screen Machine: “In researching the dance, I chose to focus on the interactions between the dancers that occur in the form of cues. 2. Cubes is an installation of performative objects, created for users to assemble and reassemble, discovering new alignments between slots cut into the sides of each module.

DANCE REVIEW - Loud Tables, but Not a Restaurant The mighty roar of 20 metal tables dragged across the floor is heard not throughout the land but at the Brooklyn Academy of Music, where William Forsythe's splendid dancers in Ballett Frankfurt are staging the grandest of all finales this week. As the dancers race to the rear of the stage, pulling five rows of tables whose legs scrape and bounce on a flat surface, the program ends with a high-decibel screech. The sound of this visualized adrenaline rush is both exhilarating and ambiguous: part earthquake, part industrial noise, part joyous release. As usual, the best advice for looking at Mr. Never mind that his springboard for the table piece ''One Flat Thing, reproduced'' had something to do with Robert Scott's failed expedition to the South Pole. What one saw on Tuesday night at the opening of the academy's Next Wave Festival is one of the best programs that Mr. Yet Mr. The program has been stunningly and methodically structured to build into intricacy and complexity.

Jazz Tube-An Archive Of Jazz On Video Thank You for all the great support. Check Out Music Video Search for all genres of Music Videos Below is a new look with a search engine to help source all your jazz videos Site Is current under renovation please be patient Welcome to Powered By This site is devoted to giving you the best videos on Jazz that have been collected by Jazz lovers thru out the world and made available on the great YOU Tube Web Site <A HREF=" Paintings By Bruni Check out her site Here www.brunijazzart.com Jazz has been called America's classical music, and for good reason. Afro-Cuban Jazz is a combination of jazz improvising and rhythms from Cuba and Africa; it is also known as Latin Jazz. <A HREF="

Dance Drawings William Forsythe Choreographic Objects: Biography has been active in the field of choreography for over 45 years. His work is acknowledged for reorienting the practice of ballet from its identification with classical repertoire to a dynamic 21st century art form. Forsythe's deep interest in the fundamental principles of organization has led him to produce a wide range of projects including Installations, Films, and Web based knowledge creation. Biography Raised in New York and initially trained in Florida with Nolan Dingman and Christa Long, Forsythe danced with the Joffrey Ballet and later the Stuttgart Ballet, where he was appointed Resident Choreographer in 1976. After the closure of the Ballet Frankfurt in 2004, Forsythe established a new ensemble, The Forsythe Company, which he directed from 2005 to 2015. Awards received by Forsythe and his ensembles include the New York Dance and Performance “Bessie” Award (1988, 1998, 2004, 2007) and London’s Laurence Olivier Award (1992, 1999, 2009).

Toying with the laws of physics: Elizabeth Streb’s latest dance performance The last time I slammed into a wall, it hurt. I’m not too fond of falling off three-story buildings, either. The laws of physics can be so unforgiving. I heard about Streb’s work last month from Harvard physicist Lisa Randall, who has acquired some renown in artistic circles for her opera inspired by the concept of extra spatial dimensions. Streb distinguishes her work from ballet and modern dance, which, she says, seek to camouflage the forces of nature. The parkour-like acrobatics weren’t even my favorite parts of her show. Dancers walk up a wall in Elizabeth Streb’s latest show; courtesy of George Musser William Forsythe Interview TEXT Becoming | cassiel Enhancing Choreographic Objects In the Short Notice Department: we’re presenting at the EChO Seminar tomorrow at Sadler’s Wells, talking about the Choreographic Language Agent, and Becoming. Details here. Thinking with the Body The Wayne McGregor | Random Dance exhibit Thinking with the Body opens at the Wellcome Collection this week. Added, 2013-09-16: there’s a promotional video on YouTube: Becoming We’ve been working with Wayne McGregor | Random Dance and OpenEndedGroup on Becoming, an algorithmic “virtual dancer” that grows and evolves in response to emulated mechanical constraints and to a database of film material. Becoming is currently being used in the studio in the making of Atomos, which premieres in October.