OESSTA - Death for Freedom: Integrating the African Canadian Narrative in the Teaching of the War of 1812. – Lieutenant Colonel Nathaniel Coffin, Adjutant General's office, York, July 21, 1821 In 2014, there has been a lot of hoopla about the many war commemorations that will be recognized this year – the 100th anniversary of WW1 and the 75th anniversary of WW2. 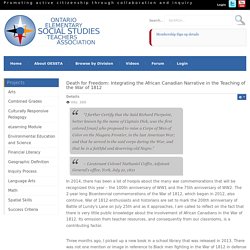 The 2-year long Bicentennial commemorations of the War of 1812, which began in 2012, also continue. War of 1812 enthusiasts and historians are set to mark the 200th anniversary of Battle of Lundy's Lane on July 25th and as it approaches, I am called to reflect on the fact that there is very little public knowledge about the involvement of African Canadians in the War of 1812. Its omission from teacher resources, and consequently from our classrooms, is a contributing factor.

Three months ago, I picked up a new book in a school library that was released in 2013. We Stand on Guard for Thee: Teaching and Learning the African Canadian Experience in the War of 1812 (*MARKER REQUIRED) Richard Pierpoint Heritage Minute and Teaching Resources. National Film Board of Canada - Life in Early Canada 01 - Emilie's Journey. The Atlas of Canada - History. This series of maps presents the history of the political boundaries in Canada. 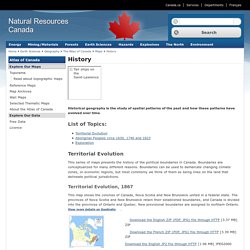 Boundaries are conceptualized for many different reasons. Boundaries can be used to demarcate changing climate zones, or economic regions, but most commonly we think of them as being lines on the land that delineate political jurisdictions. Territorial Evolution, 1867 to 1999 Canada had a relatively small area when created in 1867, but it then expanded greatly to become, by area, the second largest country in the world.

This map is a composite of 18 Atlas maps which show territorial changes at specific times during the period 1867 to 1999. ARCHIVED - Catharine Parr Traill - Biographies - Susanna Moodie and Catharine Parr Traill. Life in Canada When Catharine wrote The Backwoods of Canada (1836), her account of the Traills' first settlement in the bush, she did so "full of hope" for their future (See Catharine's letter to Richard Gwillym, March 9, 1845). 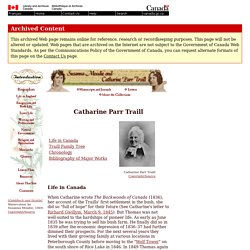 But Thomas was not well-suited to the hardships of pioneer life. As early as June 1835 he was trying to sell his bush farm. He finally did so in 1839 after the economic depression of 1836–37 had further dimmed their prospects. For the next several years they lived with their growing family at various locations in Peterborough County before moving to the "Wolf Tower" on the south shore of Rice Lake in 1846. They were never prosperous and suffered many hardships including the loss of Oaklands to fire in August 1857. As a prolific letter writer, Catharine helped to create a valuable record of family and community in the 19th century. Travels With Elizabeth Simcoe: A Visual Journey Through Upper and Lower Canada. Upper Canada. Simon Fraser. Simon Fraser, explorer, fur trader (b at Mapletown, Hoosick Township, New York, 20th May 1776: d at St Andrews West, Ontario 18 Aug 1862). 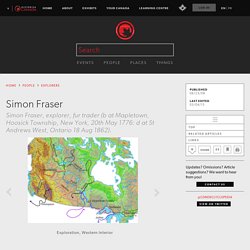 Loyalists. Loyalists were American colonists, of different ethnic backgrounds, who supported the British cause during the American Revolution (1775–83). 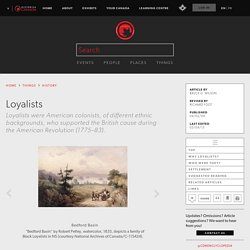 Bedford Basin "Bedford Basin" by Robert Petley, watercolor, 1835, depicts a family of Black Loyalists in NS (courtesy National Archives of Canada/C-115424). Kings Landing This historical park recreates life as it was after the Loyalists settled in New Brunswick (photo by J.A. Kraulis/Masterfile). Ross-Thompson House. Prairie West. Prairie West, the "western interior" of Canada, is bounded roughly by Lake Superior and the Rocky Mountains, the 49th parallel of latitude and the low Arctic. 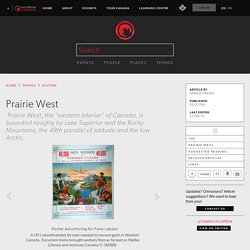 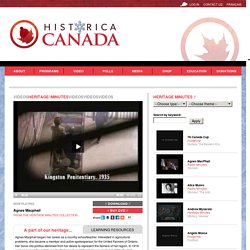 Interested in agricultural problems, she became a member and active spokesperson for the United Farmers of Ontario. Her move into politics stemmed from her desire to represent the farmers of her region. In 1919 women gained the right to run for Parliament, and Macphail was elected in 1921, the first federal election in which women had the vote. A courageous and dedicated champion of human rights, Macphail successfully fought for old-age pensions, prison reform, and farmers' co-operatives. In office she also came to see herself as representing women's issues and founded the Elizabeth Fry Society of Canada. She had strong views about war, urging total disarmament for Canada.

It took political stamina and dogged persistence to see her ideas through, and Macphail credited both her parents for her character strengths. Heritage Minute Cast.