The Art Of Animation 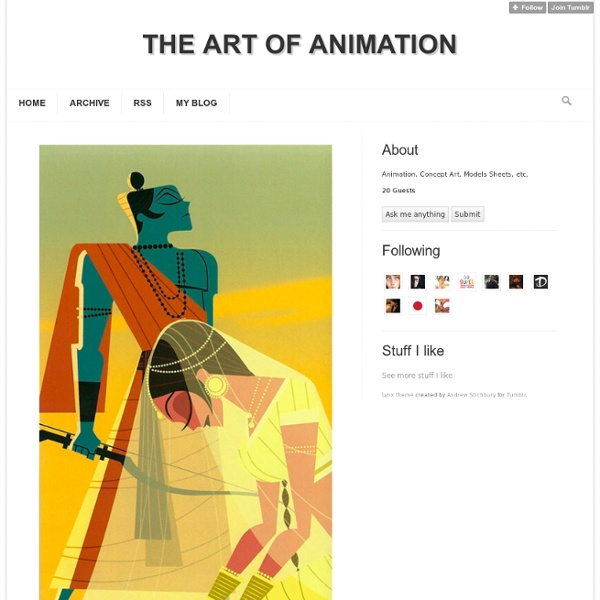 Lilo All Grown Up Chris Sanders is the director of the Dreamworks movie How to Train your Dragon He is known for co-directing, co-writing, co-storyboarding, co-designing, and voicing the Lilo & Stitch movie. Here's some of is art. sketches and things whats the program you go to by default? like with sketches and whatnot Anonymous Program stuff is in my faq but if you want details, my default’s Sai. Usually if it’s not painted, it’s Sai, and no matter where it starts I edit and do finishing touches in Sai. Here’s a couple mostly recent examples that might help??

a blog about drawing, painting, illustration, comics, concept art and other visual arts Founded in 2003 by Jon Beinart as the “beinArt Australian Surreal Art Collective” and expanded internationally in 2006 as the “beinArt International Surreal Art Collective”, the beinArt Collective has long been a web destination, publisher and sponsor of group exhibitions for artists working in the areas of strange, surreal, fantastic, psychedelic, visionary and outsider art. Aficionados of these genres have found the website, and its reserve of artist galleries, missing for a time now, while founder Jon Beinart endeavored to bring the site up to date, reduce the strain of upkeep on the multiple galleries and generally bring the site into line with the modern web, streamlined and functioning more as a lighthouse than a repository. The good news is that the beinArt Collective site is now back from the shadows; and, given its nature, has of course, brought the shadows back with it.

Recycled Books Transform Into Abstract Body Parts UK-based artist Bronia Sawyer has always found art to be a means by which she could control and manipulate her world and her surroundings. From a very young age, Sawyer expressed herself through her creativity, later saying, "For me creativity and imagination go hand in hand." Body Parts, Live Breath Art is a series of sculptures in which the artist took pages and pages of recycled books and transformed them into spiraling, abstract impressions of body parts.

Paul Kidby - The Art of Discworld (Repost) Terry Pratchett - The Art of Discworld HarperCollins | English | 1995 |ISBN: 0060758279 | JPG | 321 MbIllustated by Paul Kidby In THE ART OF DISCWORLD, Terry Pratchett takes us on a guided tour of the Discworld, courtesy of his favourite Discworld artist, Paul Kidby. Following on from THE LAST HERO, THE ART OF DISCWORLD is a lavish 112-page large format, sumptuously illustrated look at all things Discworldian. Terry Pratchett provides the written descriptions while Paul Kidby illustrates the world that has made Pratchett one of the best-selling authors of all time. Here you will find favourites old and new: the City Watch, including Vimes, Carrot and Angua, the three witches - Granny Weatherwax, Nanny Ogg and Magrat Garlick - and the denizens of the Unseen University Library, not forgetting the Librarian, of course: they're all here in sumptuous colour, together with the places: Ankh-Morpork, Lancre, Uberwald and more ...No Discworld fan will want to be without this beautiful gift book.

jones n. wiedle To the folks asking about Helvetica: YES! I will be continuing the comic! I promise! Beautifully Crafted Cherry Tree Installation Inspired by last year's National Cherry Blossom Festival in Washington, D.C., Tom Price has created his own cherry trees using polypropylene pipe and nylon cables. Price heated the plastic tubing, which allowed the material to conform to his liking. Next, he used the cables to tie the tubing together. Cross-sections of the tubing were used to make the leaves. While Price's cherry trees are beautiful themselves, their shadows certainly add to the installation's beauty. To find out more, check out our interview with Tom Price below. Happy New Year Here’s the thing, director Farah Khan. I get that not all movies are meant to adhere to logic. And I get that spoofs aren’t meant to be made fun of. But I also know that you don’t get to use those lines of defence when a large chunk of your three-hour film is all melodrama and no spoof. If I’m expected to take a lot of it seriously, I’m taking all of it seriously!

A G Sea is neither blue nor green, it’s a mix of sand color and reflection of the sky. A cover I illustrated for middle grade urban fantasy novel, “Only gingers can be witches”, about friendship and magic. More information available on the author’s website/facebook. A digital painting and a drawing made on a trip to Tatra mountains some years ago. Garret Rau by Valentina Quijada for Male Model Scene A Touch of Silver story captured for Male Model Scene by photographer Valentina Quijada with model Garrett Rau at the famed Disney Concert Hall by Frank Gehry serving as an impeccable backdrop. In charge of the eye-catching styling was Kevon Young-Square while the grooming was handled by Iris Esmeralda. The handsome Garrett is represented by Vision Los Angeles model agency. For the session Kevon has selected pieces from Urban Outfitters, ZARA, Noveek (shopnoveek.com), Steve Madden, They Alley Downtown LA, and H&M. The clear tee above from the new collection by Kevon Young Square is available at shopnoveek.com from October 22nd.

Bumble Bee Hello everyone!Thank you for the feedback for Halloween costumes. I got a lot of great suggestions! I must once again ask for help… this time for school! The Hidden Seed Dress: Handmade Vintage Shoes: Anthropologie Belt: Target Earrings: Barbara Macleod I missed coming here. It has been a long time since I wrote the last post.