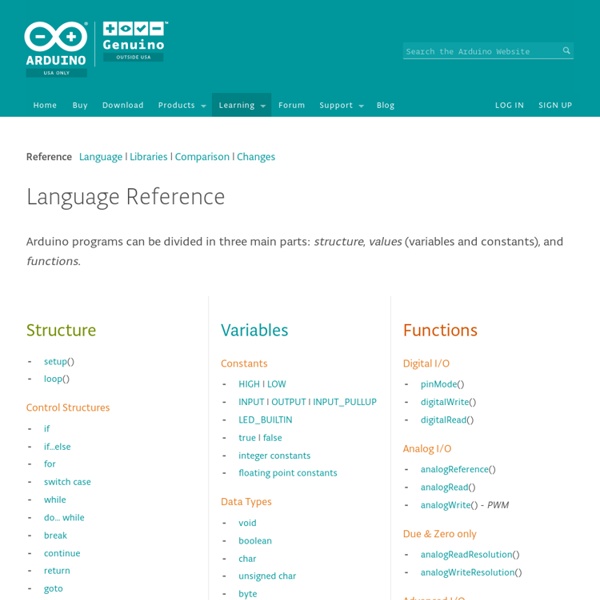 Setting Up App Inventor You can set up App Inventor and start building apps in minutes. The Designer and Blocks Editor run completely in the browser (aka the cloud). To see your app on a device while you build it (also called "Live Testing"), you'll need to follow the steps below. You have three options for setting up live testing while you build apps

playground - InterfacingWithHardware These topics cover the hardware and software setup required to connect an Arduino device with a variety of electronic parts, chips and devices. A related topic not covered under this section is the shield, boards that plug directly into an Arduino's pin layout. Information on the creation and use of specific shields belongs in that section. Information on shields in general and their creation belongs here. See here for a table of shields and the Arduino pins they use.

Getting Started with ArduBlock DOWNLOAD Ardublock 1.Download ardublock-all.jar ArduBlock 2. Problems with RobotShop Rover Sample Code in Rover Development Manual - RobotShop Forum No worries mate, I am glad you responded! Thank you and the wonderful people at RobotShop for helping me on my journey into robotics. I understand that there will not be coverage on the weekends, no problem. Arduino Lesson 16. Stepper Motors The following sketch uses the Serial Monitor, so once the sketch is installed and running, open the Serial Monitor and enter a number of 'steps'. Try a value of about 500, this should cause the motor to turn through about 360 degrees. Enter -500 and it will turn back in the reverse direction. The Stepper library is included in newer distributions of the Arduino IDE - you may need to upgrade. /* Adafruit Arduino - Lesson 16.

IntegerConstants Reference Language | Libraries | Comparison | Changes Integer constants are numbers used directly in a sketch, like 123. By default, these numbers are treated as int's but you can change this with the U and L modifiers (see below). ShiftOut Learning Examples | Foundations | Hacking | Links Started by Carlyn Maw and Tom Igoe Nov, 06 Shifting Out & the 595 chip At sometime or another you may run out of pins on your Arduino board and need to extend it with shift registers. RFID Keepsake Box · Mike Buss A few years ago, I wanted to make something special for my girlfriend's birthday. After experimenting with an Arduino, I decided to try to make her a high-tech keepsake box that can lock or unlock with an RFID card. Here is the final result: I had read about the Reverse Geocache Puzzle by Mikal Hart and thought the idea was brilliant. I wanted to do something similar, but with a twist. My girlfriend had mentioned wanting a place to keep small mementos, so I thought a personalized keepsake box would be perfect!

Spooky Projects – Introduction to Microcontrollers with Arduino Spooky Projects is a set of four 3-hour classes in October 2006 hosted by Machine Project and taught by Tod E. Kurt. It is an introduction to microcontroller programming and interfacing with the real world using the Arduino physical computing platform. In the class, participants are shown and experiment with the Arduino’s capabilities and learn the basics of common microcontroller interfacing, such as: digital output to control lights and LEDs, digital input to read switches and buttons, analog output to control motor position or LED brightness, and analog input to read sensor inputs. From these tools all sorts of interesting projects can be created. In the class, a few simple project sketches are covered using the provided parts kit, under the theme of spooky animatronics for Halloween.