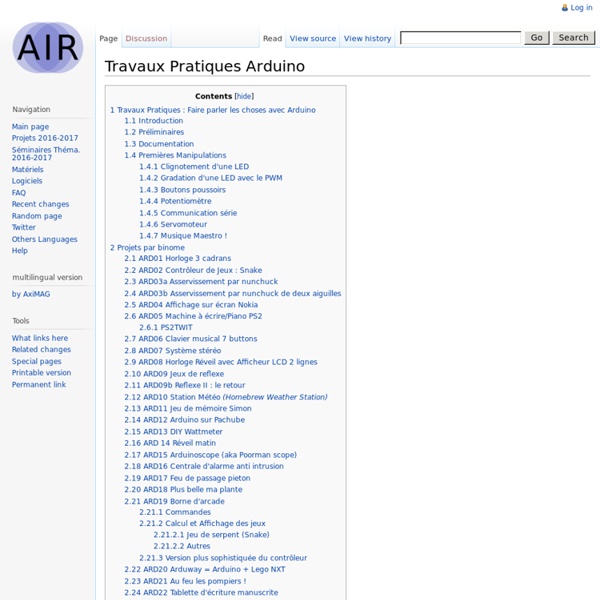 Arduino All-In-One Remote Infrared light has been used quite a lot for many different applications in many fields, one of them is communication, specifically between remotes and domestic devices, what allows us to control them without leaving the comfort of our sofa. The process of communication between an emitter (the remote) and a receiver (the device) starts when the user presses any button of the remote, this device has an oscillator and a preconfigured chip that allow the signal to adopt a square waveform with a frequency of 39kHz, depending on the button pressed, the chip will use a determined signal code. This signal travels through the circuit until it reaches the infrared LED, which transforms it into a series of pulses of invisible light (~940nm). If any sensor it's in it's range those pulses will be transformed into a quadratic wave that will indicate what to do according to the programming of the device.

DIY Arduino Bluetooth Programming Shield If you’ve ever wished you could program your Arduino without lugging a USB cable around, wanted to put an Arduino project somewhere out-of-reach but still be able to easily upload changes to it, thought about building a project that interfaces with an Android phone, or contemplated a way to get remote sensor data streamed to your computer — this project is for you. It uses a common, low-cost Bluetooth module mounted onto a prototyping shield for durable and reliable use. Along with the module is a circuit that allows the Arduino IDE to automatically reset the Arduino when uploading a new sketch.

Débuter avec Arduino! - Chapter Zero «tronixstuff Hello world! Updated 24/11/2012 Please join with us as we learn about electronics and the Arduino! Routing and Deadlock - Computer Science Unplugged Computer networks are based on passing messages from computer to computer. This sounds simple in principle, but in practice all sorts of contention and bottlenecks can occur. This activity gives some first hand experience of such issues, with a game for a group of students. Activity description (PDF) Videos Photos

The Maven Box: an Arduino Controller for Software Developers - All Every job has it's routine. I am a software developer who works with a Git/Maven based workspace everyday. So when I start working, my daily routine is to update and build my local workspace, pulling changes from GitHub, execute a maven build and execute the updated software. Usually I get my first coffee after that, but because I love coffee so much I thought there must be a faster way to get my system updated and running.

Simple Hack to Make an Adjustable Continuous Rotation Servo I love to modify hobby servos into continuous rotation gearmotors. Not only are the very useful, but I feel like I’m getting away with something sneaky. A modified servo in a radio controlled vehicle does the job of a motor, a gearset, and an electronic speed controller, and when cheap servos can be had for just a few dollars that’s a real bargain. I always use cheap servos, but in my experience they are a hassle to modify. The potentiometer is often part of the structure, so it can’t be removed, but rather the wires to it have to be cut and matching resistors soldered in to replace its variable resistor. If you want it to have a fine adjustment trimpot you have to buy one and solder that in too.

NRF24L01-2.4GHz-HowTo Having two or more Arduinos be able to communicate with each other wirelessly over a distance opens lots of possibilities:Remote sensors for temperature, pressure, alarms, much moreRobot control and monitoring from 50 feet to 2000 feet distancesRemote control and monitoring of nearby or neighborhood buildingsAutonomous vehicles of all kinds These are a series of 2.4 GHz Radio modules that are all based on the Nordic Semiconductor nRF24L01+ chip. (Details) The Nordic nRF24L01+ integrates a complete 2.4GHz RF transceiver, RF synthesizer, and baseband logic including the Enhanced ShockBurst™ hardware protocol accelerator supporting a high-speed SPI interface for the application controller. The low-power short-range (200 feet or so)Transceiver is available on a board with Arduino interface and built-in Antenna for less than $3! See it here. NOTE!

Tech Tips for Teachers: 3 Ways to Use QR Codes in the Classroom Although QR codes have long since lost their shiny, new glow, the technology hasn’t lost its value in education. The rise of one-to-one computing and bring-your-own-device programs in K–12 schools means students access digital learning tools more than ever before. And QR codes, which launch websites with the click of a button, make it so students can spend more time learning and less time typing out complicated URLs. Here are three specific uses for QR codes in the classroom, curated from educators around the web: 1. Distribute Classroom Materials

DIY Arduino Battery Capacity Tester - V1.0 [ Play Video ] I have salvaged so many old lap-top batteries ( 18650 ) to reuse them in my solar projects.It is very difficult to identify the good cells in battery pack.Earlier in one of my Power Bank Instructable I have told, how to identify good cells by measuring their voltages, but this method is not at all reliable.So I really wanted a way to measure each cell exact capacity instead of their voltages. Few week ago, I have started the project from the basics.This version is really simple one,which is based on Ohms Law.The accuracy of the tester won’t be 100% perfect, but it does give reasonable results that can be used and compared with other battery, so you can easily identify good cells in a old battery pack.

Build Your Own Arduino Weather Station In my youth, I had a friend who was a weather enthusiast. He had his own backyard weather station, and in a little black log book, every day, he would dutifully record wind speed and direction, temperature, humidity, barometric pressure, and rainfall. I thought it was tremendously geeky and didn’t understand his passion for it. But I had to admit to being impressed when he started charting the data and actually learning something useful about our local weather dynamics. It was my first direct exposure to citizen science. Here in the 21st century, you can create your own backyard weather station that is computer-controlled, where all of the data is automatically captured and stored for later analysis.

Système Adafruit apprentissage Introducing Bluefruit EZ-Link The ultimate serial Bluetooth link & wireless Arduino programmer We are excited to add another product to our growing Adafruit Bluefruit line, this time its the Bluefruit EZ-Link: the best Bluetooth Serial Link device ever made. Programming mBot with App Inventor 2 ~ Web Tools Review I've recently purchased a robot, based on a board that is Arduino Uno compatibile, called mBot (here you can find it on Amazon Italy). It has a lot of interesting features that make it suitable for teaching, and its price is really interesting (nearly 80 euros/80 US dollars). It is made by MakeBlock and I'll present its main features in an upcoming post. This post is about the possibility to command it without its default editor, mBlock (a really good one, indeed; see but using App Inventor.

Arduino Mini CNC Plotter Machine from dvd drives - All In this project I will show you how to easily build your own low-cost Arduino Mini CNC Plotter! This project is an update from my previous cnc, with better construction and with more accuracy. I decided to make this detailed guide to help you make it on a few easy steps. Small description: An Arduino-Powered Laser Engraver That You Can Build MichielD99 is a 16 year old Belgian teenage maker. It is amazing that, with the tools and materials available today, a young person, really any person, can create something as sophisticated and professional-looking as this laser engraver. It took Michiel about three months to plan and construct the machine.