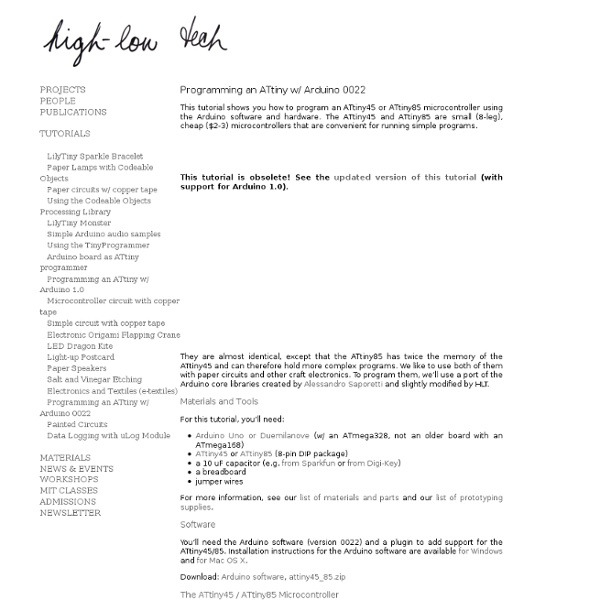 This tutorial shows you how to program an ATtiny45 or ATtiny85 microcontroller using the Arduino software and hardware. The ATtiny45 and ATtiny85 are small (8-leg), cheap ($2-3) microcontrollers that are convenient for running simple programs. This tutorial is obsolete! See the updated version of this tutorial (with support for Arduino 1.0). They are almost identical, except that the ATtiny85 has twice the memory of the ATtiny45 and can therefore hold more complex programs. Materials and Tools For this tutorial, you’ll need: Arduino Uno or Duemilanove (w/ an ATmega328, not an older board with an ATmega168) ATtiny45 or ATtiny85 (8-pin DIP package) a 10 uF capacitor (e.g. from Sparkfun or from Digi-Key ) a breadboard jumper wires For more information, see our list of materials and parts and our list of prototyping supplies . Software You’ll need the Arduino software (version 0022) and a plugin to add support for the ATtiny45/85. Download: Arduino software , attiny45_85.zip Pin connections:

Arduino turns off idle Amplifier What is this? NovaIdle is monitoring amplifier for idle time (no music played) and turns off the amplifier with IR command It is written and tuned for the Peachtree Nova amplifier that has a tube. I wrote this program as I tend to forget the amplifier on and given the tube has limited ifetime, I am always feeling bad when I see it still on few hours later. Not to mention of course that we can be a bit more green by preserving power. I published another version of this (for a Kenwood amplifier too) What You need to build this? Optional Components: 1x Blue LED 1x Yellow LED 1x Green LED 3x 330 Ohm Resistor (anything from 220 to 330 will do) 1x Prototype board to solder and connect the above 1x 3.5mm Earphone Stereo Jack 1x RCA to 3.5mm Stereo cable 1x USB Power supply (or you can feed it from other source) Sampling the audio in every 2 secods and the idle time is set to 5 minutes (you can change it in the code), enough time to swap CD's or to tell my Sonos which album to play next.

Mosquino: energy harvesting board Mosquino is a software-compatible derivative of the open-source Arduino platform that is designed for extremely low power consumption, operating from ambient (harvested) environmental energy sources such as heat, sunlight and vibration. (Or coincells, if you’re not feeling adventurous.) Note: This project is in its early beginnings, and has not been exhaustively tested yet. Why Mosquino? Important specs: Operating voltage range: 1.8 ~ 3.3V Input voltage range: Depends on power shield (the board expects to receive 1.8 ~ 3.6V pre-regulated or 0 ~ 6V unregulated from the power shield). Downloads / design files WARNING – This is a very new project and these have not been fully tested yet. Mosquino’s code and design files are now hosted on Google Code. If anyone has built the old ‘rev1′ version, its design and support files can be downloaded below. Arduino board support dropin rev1 (11/17/2010) – updated to Arduino 0020 core/libraries, added I2C pin definitions. Low-power features:

xoscillo - A software oscilloscope that acquires data using an arduino or a parallax (more platforms to come). About This is a multiplatform software oscilloscope and logical analyzer. It supports arduino(with custom firmware) and a Parallax USB oscilloscope. More platforms to come. Features Panoramic view Load and save waveforms Zoom in and out Can open several waveforms at the same time Can run several oscilloscopes/logical analyzers simultaneously Frequency analysis using FFT Filtering, so far it has a low pass filter, probably more to come. Supported platforms Support Ask here in our forum Screenshots Basic screen shot showing the oscilloscope displaying a simple waveform Logic analyzer screenshot Displays the FFT of the signal and underneath the FFT over time. This screen shot shows an arduino based oscilloscope and a parallax one working simultaneously in realtime. Linux Notes from the Author The code is not by any means great, its just a quick exercise I did to learn c#. License

PIC32 Pinguino dev board - $31.46 For PIC fans, or anyone who wants a dev board with a little more horsepower under the hood, the PIC32 Pinguino presents a step up from Arduino. This board is the same size and shape, but has a 32-bit microcontroller, running at 80 MHz with a huge amount of flash and RAM for intensive application. It also has some neat extras like a DC/DC converter input and a built in lithium-ion/polymer charger for portable projects. What is interesting about the Pinguino is that not only is it open source hardware, with all the files available online, but it also has a fully open source IDE for Mac, Win, and Linux. The IDE isnt the Arduino IDE, although it shares some similarities and sketches are written in the same way. However, please note that despite the board being very Arduino-like, it isn't an Arduino, isn't supported by the Arduino team or forums, and doesn't work with the Arduino IDE .

The RRRRRRRRRRBBA, a $3 Arduino 2. The Arduino is NOT a microcontroller! Of course, the Arduino is not a microcontroller, but rather a development environment for microcontrollers -- including a programmer board, a software program for the computer, and a programming language, in addition to the microcontroller chip itself. Could that possibly mean that.... (read on) Aria G25 - Embedded Linux 25€ Aria G25 is a cost-effective System-on-Module (SoM) thought of to drastically reduce the development time needed to design a low-power and low-EMI Linux Embedded device. The more complex hardware like CPU, RAM, Ethernet, power and EMI components are integrated on a single SMD component in just 40x40 mm (1.57x1.57 inch) using an complex eight layers PCB permitting hardware designers to create their simple and cheap carrier boards. Software main features AriaG25 sections Click on the following image to take to see how it's simple to wire external components to design your custom board using Aria G25: Aria G25 is designed to boot a Linux Embedded distribution compiled for ARM9 architecure from a microSD or a SD card. We propose, by default, a ready-to-use Linux Debian distribution stored on a microSD card. Some ready to use bootable microSD cards are available on the microSD on-line catalog but they can be generated by yourself from binaries or from the sources following our tutorials.

Arduino and TFT LCD Learn how to use an inexpensive TFT colour touch LCD shield with your Arduino. This is chapter twenty-nine of our huge Arduino tutorial series. Updated 07/02/2014 There are many colour LCDs on the market that can be used with an Arduino, and in this tutorial we’ll explain how to use a model that is easy to use, has a touch screen, doesn’t waste all your digital output pins – and won’t break the bank. It’s the 2.8″ TFT colour touch screen shield from Linksprite: And upside down: As you can imagine, it completely covers an Arduino Uno or compatible board, and offers a neat way to create a large display or user-interface. And unlike other colour LCDs, this one doesn’t eat up all your digital output pins – it uses the SPI bus for the display (D10~D13), and four analogue pins (A0~A3) if you use the touch sensor. With some imagination, existing Arduino knowledge and the explanation within you’ll be creating all sorts of displays and interfaces in a short period of time. Getting started Conclusion

Femtoduino: an ultrasmall (20.7x15.2 mm) libre Arduino compatible board Femtoduino is an ultrasmall (20.7x15.2 mm) libre Arduino compatible board. By using the QFN32 version of the ATMEGA 328p, 0.05" connectors, 0402 components and removing everything not strictly necessary, I've been able to design and hand build an Arduino compatible board which is very small (20.7x15.2 mm) and ultra light (2g) but has exactly the same computing power of the Arduino Duemilanove or UNO. Femtoduino has been developed for ultrasmall Arduino prototyping. I had the need to add "Arduino intelligence" to quite small objects (balls, cubes, mices, etc) so I needed to shrink down the size of Arduino as much as possible. Femtoduino is the result. For regular prototyping, Femtoduino comes with a handy breakout board which breaks out Femtoduino's 0.05" connectors into regular 0.1" pins so that you can use it on standard breadboards or perfboards. Femtoduino is a true libre hardware project. Video presentation of Femtoduino Femtoduino Sources and Schematics Please support the project!

Arduino shrunk - how to use ATtiny13 with Arduino IDE Lots of different MCUs can be worked on using the Arduino IDE, not just the Arduino boards! Arduino IDE (Integrated Development Environment), currently in version 1.0, is a great system for programming the Arduino boards. It has an easy-to-learn intuitive interface and comes with all the necessary settings for the most common Arduino boards – Uno, Duemilanove, Nano and others based on ATmega168 and ATmega328 microcontrollers. The hardware-specific libraries are called cores and they are located under ~/sketchbook/hardware/xxxx/cores where xxxx can be either arduino or a hardware name that the developer of the libraries settled on – tiny, for example. So far I came across three different sets of libraries suitable for programming of ATtiny microcontrollers: Damellis’es ATtiny cores (can support ATtiny13 with additional configuration changes)Arduino-Tiny Cores (does not seem to support ATtiny13)smeezekitty’s core13 (ATtiny13 only) All ATTiny cores install in a similar way: Happy coding!

Arduino and GSM Cellular – Part Two Connect your Arduino Uno or compatible to the cellular network with the SM5100 GSM module shield. This is chapter twenty-six of a series originally titled “Getting Started/Moving Forward with Arduino!” by John Boxall – A tutorial on the Arduino universe. The first chapter is here, the complete series is detailed here. If you are looking for tutorials using the SIMCOM SIM900 GSM module, click here, and here if you have an Arduino Mega. Updated 15/01/2014 Introduction The purpose of this tutorial is to have your Arduino to communicate over a GSM mobile telephone network using the SM5100B GSM Cellular Shield: My goal is to illustrate various methods of interaction between an Arduino and the GSM cellular network using the SM5100B GSM shield from Sparkfun, with which you can then use your existing knowledge to build upon those methods. Stop! It is assumed that you have a solid understanding of how to program your Arduino. Getting started However your Arduino board can only supply just under 1A.

Self built MC HCK for $5 - mchck.org From the beginning, the MC HCK was conceived to be not only cheap to produce and sell, but it was also conceived to be buildable at home, at a low cost. In this post, we’ll show how to build a MC HCK at home. Getting the Parts All required and optional parts are listed in the BOM. Let’s quickly go over how to get the required ones. The MC HCK boards can easily be ordered from the usual suspects in China. You can sample a compatible MCU directly from Freescale. Passives These are common parts, and many people will already have them in some way or another. 100nf decoupling caps Cost: $1.85 for 100 2.2μf regulator caps Cost: $1.89 for 20 33Ω resistors Cost: $2 for 100 1kΩ resistors Cost: $0.99 for 50 LEDs Cost: $0.99 for 15 buttons Cost: $6+$1 for 50 Assembly Check out this soldering stop motion sequence taken while hand soldering a MC HCK: Software Once your MC HCK boards are soldered, use the wiki to get started with the software library.