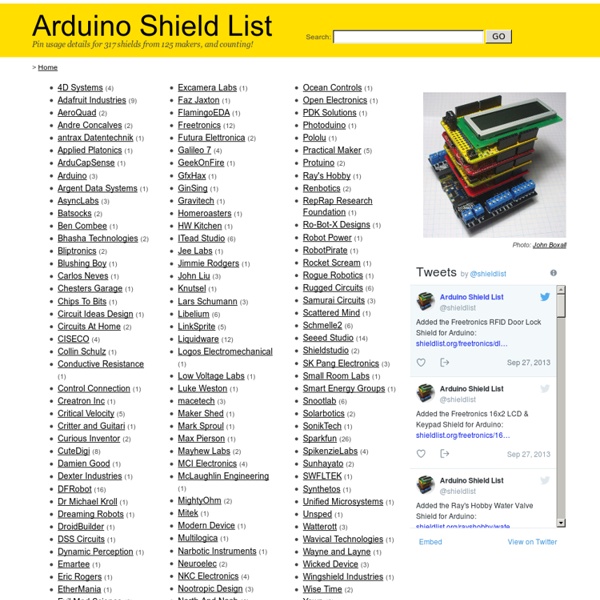 Arduino Tutorials – Chapter 42 – Numeric Keypads Learn how to use various numeric keypads with your Arduino. This is chapter forty-two of our huge Arduino tutorial series. Updated 16/12/2013 Numeric keypads can provide a simple end-user alternative for various interfaces for your projects. learn.adafruit The original Adafruit Motorshield kit is one of our most beloved kits, which is why we decided to make something even better. We have upgraded the shield kit to make the bestest, easiest way to drive DC and Stepper motors. This shield will make quick work of your next robotics project!

Arduino Arduino is an open-source computer hardware and software company, project and user community that designs and manufactures kits for building digital devices and interactive objects that can sense and control the physical world.[1] Arduino boards may be purchased preassembled, or as do-it-yourself kits; at the same time, the hardware design information is available for those who would like to assemble an Arduino from scratch. The first Arduino was introduced in 2005. The project leaders sought to provide an inexpensive and easy way for hobbyists, students, and professionals to create devices that interact with their environment using sensors and actuators. Common examples for beginner hobbyists include simple robots, thermostats and motion detectors. Driving Big Stepper Motors with Arduino Any stepper motor is great, but the big ones are amazingly impressive. There are numerous stepper drivers dedicated for use with Arduino, but they are generally limited to Nema 17 and Nema 23. Luckily, using larger steppers (Nema 34 in this instance) with Arduino is still easy. Large steppers give you an amazing combination of precision, control and torque that can be useful for anything from home automation to DIY CNC machines.

How to control a Servo In this one, servo is programmed to be controlled by two buttons, one turns servo to the left and the other one turns it to the right. When the servo is turning, corresponding LED will be switched on to indicate the operation. Result: Because Arduino has built-in library for controlling servo, which makes servo a really easy kit to use. In this project, I will be using a servo to turn the IR sensor around constantly. This is the circuit Diagram: Bionic Arduino – Introduction to Microcontrollers with Arduino Bionic Arduino is a set of four 3-hour classes in November 2007 hosted by Machine Project and taught by Tod E. Kurt. It is an introduction to microcontroller programming and interfacing with the real world using the Arduino physical computing platform. It focuses on building new physical senses and making motion with the building blocks of robotics, using Arduino as a platform. In the class, participants are shown and experiment with the Arduino’s capabilities and learn the basics of common microcontroller interfacing, such as: digital output to control lights and LEDs, digital input to read switches and buttons, analog output to control motor position or LED brightness, and analog input to read sensor inputs.

Proto Shield for Arduino This is a design for an open-source prototyping shield for Arduino NG/Diecimila. It has tons of cool features, to make prototyping on your Arduino easy. Compatible with NG, Diecimila, Duemilanove and any Arduino-clone in the 'classic' shape and pinout.Reset button up topICSP headerLots of GND and +5V rails.DIP prototyping area makes it easy to add more chips.SOIC prototyping area above USB jack for up to 14-pin SOIC chip, narrow medium or wide package.Use 'mini' or 'medium' breadboard.Two 3mm LEDs with matching resistors.Extra 6mm button Ideas for use Larger breadboard for tons of working space!

How To Install Windows 10: How to download and install Windows 10 Ladies and gentlemen, the wait is over — Windows 10 is finally here. Microsoft on Wednesday began the long, long process of trying to make the world forget all about the disaster that was Windows 8. By all accounts, the company has done a good job so far, not just by skipping 9 and jumping right to 10 for the software’s name, but also by creating a new operating system that actually seems like it was designed to run on a laptop or desktop, rather than just a tablet. While July 29th marks the start of the Windows 10 rollout, there’s no guarantee that you’ll get the new software today — or even this week — if you sit around and wait for Microsoft’s updater.

Temperature Sensor + Arduino « DanielAndrade.net Hello people, it’s been a while since I have posted projects on this website. This semester was really busy, I didn’t have time to much else, but soon I will have my winter holiday (Here in south our summer holiday is from December to February). Today I am going to show you how to build a simple temperature sensor using one LM35 Precision Temperature Sensor and Arduino, so you can hookup on your future projects. The circuit will send serial information about the temperature so you can use on your computer, change the code as you will. I’m planning to build a temperature sensor with max/min + clock + LCD, and when I get it done, I will post here. Parts: