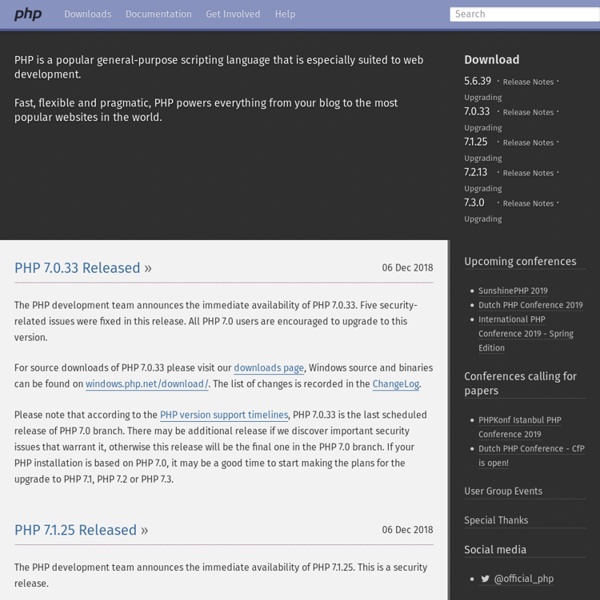 We are continuing to work through the repercussions of the php.net malware issue described in a news post earlier today. As part of this, the php.net systems team have audited every server operated by php.net, and have found that two servers were compromised: the server which hosted the www.php.net, static.php.net and git.php.net domains, and was previously suspected based on the JavaScript malware, and the server hosting bugs.php.net. The method by which these servers were compromised is unknown at this time. All affected services have been migrated off those servers. We have verified that our Git repository was not compromised, and it remains in read only mode as services are brought back up in full. As it's possible that the attackers may have accessed the private key of the php.net SSL certificate, we have revoked it immediately.

p.mapper Download p.mapper release 4.3.1 available more... p.mapper release 4.3.0 available more... Releases at Sourceforge WordPress Cloud Hosting, WordPress Installer, Docker Container and VM For years, when I needed a local instance of WordPress, I’d spend a few hours installing MySQL, hacking Apache config files, downloading and setting up WordPress, configuring my localhost to point to the WordPress install, etc. I could get it to work, but it was a real ordeal, and when I was done, WordPress would not install plug-ins and themes the normal way: I had to download them, manually install them, and then go back to WordPress to use them.Then came MAMP, which made the set-up better, but installing plug-ins or themes still meant exiting WordPress, doing a manual download, moving the files to the correct folder, etc.With Bitnami Stack for WordPress, everything is self-contained. You launch Bitnami Stack for WordPress, and not only is everything there, ready to go, but it works just like WordPress. What a deal!

Smalltalk Welcome to Smalltalk.org. Getting The Message The Essentials of Message-Oriented Programming with SmalltalkBy Alan Lovejoy. Smalltalk is a foundational programming language that is based on pervasive message passing, pervasive dynamic strong typing, pervasive reflection and pervasive object orientation. Message passing: Almost all computation in Smalltalk happens via the sending of messages. INRegistry INRegistry is the organisation responsible for the .in TLD and the native language internationalised domain name TLDs for the country. It was appointed by the government of India, and operates under the authority of NIXI, the National Internet eXchange of India. History[edit] Most countries have their own Top Level Domain.

Apps/Dia Welcome to Dia's new homepage. Dia is a GTK+ based diagram creation program for GNU/Linux, MacOS X, Unix, and Windows, and is released under the GPL license. Dia is roughly inspired by the commercial Windows program 'Visio,' though more geared towards informal diagrams for casual use. It can be used to draw many different kinds of diagrams. Apache HTTP Server The Apache HTTP Server, colloquially called Apache (/əˈpætʃiː/ ə-PA-chee), is the world's most used web server software. Originally based on the NCSA HTTPd server, development of Apache began in early 1995 after work on the NCSA code stalled. Apache played a key role in the initial growth of the World Wide Web,[5] quickly overtaking NCSA HTTPd as the dominant HTTP server, and has remained most popular since April 1996. In 2009, it became the first web server software to serve more than 100 million websites.[6]

HTML5 This Version: Latest Published Version: Latest Version of HTML: Latest Editor's Draft of HTML: Previous Version: Previous Recommendation: C (programming language) C is one of the most widely used programming languages of all time,[8][9] and C compilers are available for the majority of available computer architectures and operating systems. C is an imperative (procedural) language. It was designed to be compiled using a relatively straightforward compiler, to provide low-level access to memory, to provide language constructs that map efficiently to machine instructions, and to require minimal run-time support. C was therefore useful for many applications that had formerly been coded in assembly language, such as in system programming. Despite its low-level capabilities, the language was designed to encourage cross-platform programming.

Internet backbone Each line is drawn between two nodes, representing two IP addresses. This is a small look at the backbone of the Internet. The Internet backbone may be defined by the principal data routes between large, strategically interconnected computer networks and core routers on the Internet. These data routes are hosted by commercial, government, academic and other high-capacity network centers, the Internet exchange points and network access points, that interchange Internet traffic between the countries, continents and across the oceans. Internet service providers, often Tier 1 networks, participate in Internet backbone exchange traffic by privately negotiated interconnection agreements, primarily governed by the principle of settlement-free peering. History[edit]