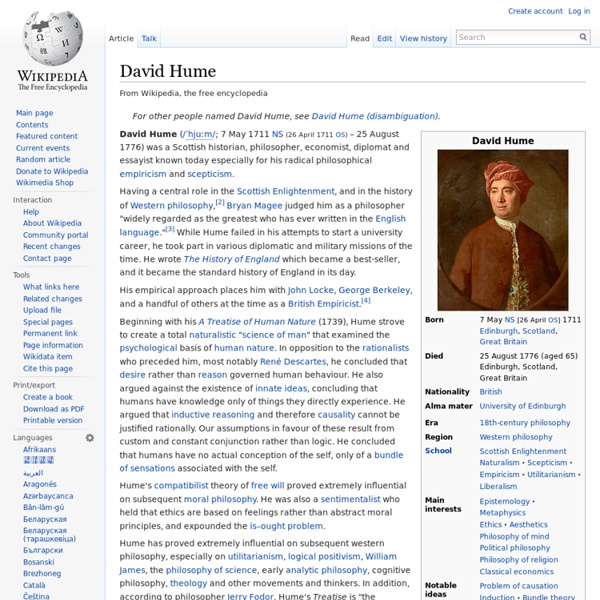 David Hume (/ˈhjuːm/; 7 May 1711 NS (26 April 1711 OS) – 25 August 1776) was a Scottish historian, philosopher, economist, diplomat and essayist known today especially for his radical philosophical empiricism and scepticism. His empirical approach places him with John Locke, George Berkeley, and a handful of others at the time as a British Empiricist.[4] Hume's compatibilist theory of free will proved extremely influential on subsequent moral philosophy. He was also a sentimentalist who held that ethics are based on feelings rather than abstract moral principles, and expounded the is–ought problem. Hume has proved extremely influential on subsequent western philosophy, especially on utilitarianism, logical positivism, William James, the philosophy of science, early analytic philosophy, cognitive philosophy, theology and other movements and thinkers. Biography[edit] Early life and education[edit] Career[edit] An engraving of Hume from the first volume of his The History of England, 1754

Esse quam videri Esse quam videri is a Latin phrase meaning "To be, rather than to seem". It and variants have been used as a motto by a number of different groups. The form Esse, non Videri ("To be, not to be seen") is the Wallenberg family motto.[1] History[edit] Esse quam videri is found in Cicero's essay On Friendship (Laelius de Amicitia, chapter 98). Ipse dixit The Roman politician Marcus Tullius Cicero coined the phrase ipse dixit, which translates from the Latin as, "he said it himself" Ipse dixit (Latin for "he said it himself") is an assertion without proof; or a dogmatic expression of opinion.[1] The fallacy of defending a proposition by baldly asserting that it is "just how it is" distorts the argument by opting out of it entirely: the claimant declares an issue to be intrinsic, and not changeable.[2]

Marcantonius Majoragio Marcantonius Majoragio (1514–1555[1]) was a Christian within Italy during the Renaissance period.[2][3][1] Majoragio was born Maria Antonio Conti in a place in the proximity of Milan in Italy, known as Majoragio.[3] Majoragio was professor for a time at Milan, and a scholar who was known to have studied after the ancient Roman philosopher and orator Cicero. During 1542 he attended lectures held within Ferrara, these lectures were performed by Maggi on the subject of philosophy, and by Alciati on jurisprudence. He occupied an intellectual position both in defence of Cicero, in respect to Calcagnini's attack on the work De Officiis and contrary and in some way hostile, in respect to the work Paradoxa Stoicorum, in this case in his own work Antiparadoxon.

Marcus Tullius Tiro Marcus Tullius Tiro (died c. 4 BC) was first a slave, then a freedman of Cicero. He is frequently mentioned in Cicero's letters. After Cicero's death he published his former master's collected works. He also wrote a considerable number of books himself, and possibly invented an early form of shorthand. Marius Nizolius Marius Nizolius (Italian: Mario Nizolio; 1498–1576) was an Italian humanist scholar, known as a proponent of Cicero. He considered rhetoric to be the central intellectual discipline, slighting other aspects of the philosophical tradition.[1][2] He is described by Michael R. Allen as the heir to the oratorical vision of Lorenzo Valla, and a better nominalist.[3] Life[edit] He was born in Brescello. He was professor of philosophy at Parma and Sabbioneta.[4][5]

James Arthur Hadfield James Arthur Hadfield (1882–1967) was a pioneer of psychodynamic psychotherapy in Britain, who became an influential figure at the interwar Tavistock Clinic. He is perhaps best known as being the analyst of W. R. Quintus Tullius Cicero Quintus Tullius Cicero ( SISS-ə-roh, Classical Latin: [ˈkɪkɛroː]; 102 BC – 43 BC) was a Roman statesman and military leader, the younger brother of Marcus Tullius Cicero. He was born into a family of the equestrian order, as the son of a wealthy landowner in Arpinum, some 100 kilometres south-east of Rome. Biography[edit] During the Second Triumvirate, when the Roman Republic was again in civil war, Quintus, his son, and his brother, were all proscribed. He fled from Tusculum with his brother.

Servius Sulpicius Rufus Servius Sulpicius Rufus (c. 106 BC – 43 BC), was a Roman orator and jurist and the father of the poet Sulpicia, the only Roman female poet whose poetry survives. He was consul in 51 BC.[1] Biography[edit] Early life[edit] He studied rhetoric with Cicero, accompanying him to Rhodes in 78 BC, though Sulpicius decided subsequently to pursue legal studies. In the later dialogue Brutus, Cicero praised the artistry of his legal learning as well as his eloquence.[2] Sigmund Freud Appears in Rare, Surviving Video & Audio Recorded During the 1930s What, I wonder, would Sigmund Freud have made of Hannibal Lector? The fictional psychoanalyst, so sophisticated and in control, moonlighting as a bloodthirsty cannibal… a perfectly grim rejoinder to Freud’s ideas about humankind’s perpetual discontent with the painful repression of our darkest, most antisocial drives. While Freud’s primary taboo was incest, not cannibalism, I’m sure he would have appreciated the irony of an ultra-civilized psychiatrist who gives full steam to his most primal urges. Freud—who was born on this day in 1856, in the small town of Freiberg—also had a carefully controlled image, though his passionate avocation was not for the macabre, salacious, or prurient, but for the archaeological. He once remarked that he read more on that subject than on his own, an exaggeration, most likely, but an indication of just how much his interest in cultural artifacts and ritual contributed to his theoretical explication of individual and social psychology. Related Content: