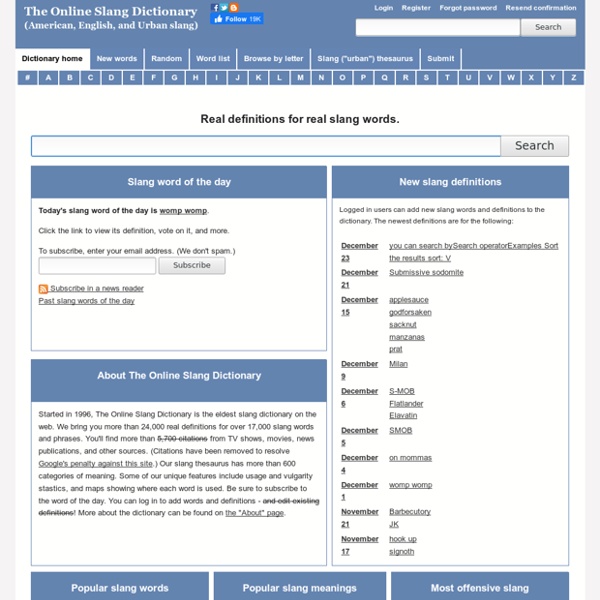 Slang: the changing face of cool Slang has always fascinated me. My father, who grew up in the council estates of Slough during the second world war, knew slang words for most situations, good and bad, which I would hear regularly around the house as a child. Somewhere in my early 20s, I stumbled across a cheap secondhand reprint of a book by an 18th-century Londoner named Francis Grose, which recorded the everyday speech of the people he encountered in the low drinking dens, bagnios and rookeries around Covent Garden and St Giles. First published in 1785, A Classical Dictionary of the Vulgar Tongue remains for me the single most important slang collection of them all. Having spent the past four years writing a history of English slang, it gradually became clear to me that the digital age is altering slang: both the way it evolves and is spread, and attitudes towards it. Of course, slang has always had its detractors.

Randall's Video Snapshots: For ESL/EFL Students The movie clips called Video Snapshots are designed to provide additional learning content related to other listening activities on my site. To learn more about this project, read the Frequently Asked Questions below: Current Videos (Click the picture to watch the video - Click the link below the picture to visit a related listening activity). You can also search by title below: Susie Dent's Modern Tribes: Brits have perfected a secret version of the English language to use with their co-workers — Quartz British English has many distinctive hallmarks: a plethora of “u”s borrowed from old French, a use of “s”s where “z”s are used in American English (realise, instead of realize), colo(u)rful idioms, and a rich history of slang. For lexicographer, writer, and broadcaster Susie Dent, British English is also “littered with tribal footprints,” as she explains her new book, Dent’s Modern Tribes: The Secret Languages of Britain. In the book, Dent gathered and chronicled the unique words and phrases used among specific professions and interest groups in the UK, terms she acquired through hundreds of interviews and, in her words, “eavesdropping.” “Every sport, every profession, every group united by a single passion draws on a lexicon that is uniquely theirs, and theirs for a reason,” she writes.

Reading from Scratch - Spelling Rules ENGLISH SPELLING RULES Short and Long Vowels 1. To spell a short vowel sound, only one letter is needed: at red it hot up 2. A call to arms: let's get rid of all the jargon! In this high-tech, gee-whiz world, more and more people seem to speak in jargon or, as I like to call it, gibberish. Whether it’s exclusive terms understandable by only a certain few, buzz-words intended to impress in meetings, or euphemisms to make something seem better than it is, the use of jargon really does little more than confuse the listener. Jargon tends to go through three stages: Jargon starts out as a simple technical sublanguage: users devise abbreviations and acronyms that help speed up processes. Future - The secret “anti-languages” you’re not supposed to know Could you erectify a luxurimole flackoblots? Have you hidden your chocolate cake from Penelope? Or maybe you’re just going to vada the bona omi? If you understand any of these sentences, you speak an English “anti-language”.

Instruction, Classroom Management, Study Skills & Special Education A Nation Still at Risk: Real Education Reform Needed Now In 1983 the landmark publication of the report A Nation at Risk seemed to shake our nation from its slumber regarding the scary truth about education in America. It detailed how there were serious problems in schools in this country and recommended fixes for what ailed schools. Unfortunately, twenty-eight years later there are still many things that are wrong in education, ... Rated: +3 Should Students Be Able to Grade Their Teachers? My first year teaching in Compton, California, I asked some of my students who they thought was the meanest teacher in the school.

Language and occupation Introduction This guide is written for students who are following GCE Advanced level (AS and A2) syllabuses in English Language. This resource may also be of general interest to language students on university degree courses, trainee teachers and anyone with a general interest in language science. 7 lifesaving websites for EFL teacher I already made one list of my favourite websites months ago, but there are so many great things you find while websurfing that I’ll probably make more of such sets. Also, it can be easily seen that I love making lists. Being a DoS I happen to be a “victim” of non-English language teachers complaining that English teachers “have it easy”. Well, I have to admit that’s quite true… So let’s use some of the great sources we may find online – and here’s my present top seven: 1 Twinkl