Darren McGarvey’s Class Wars review – the truth about social mobility. The Guardian has a general policy against reproducing people’s accents in print. 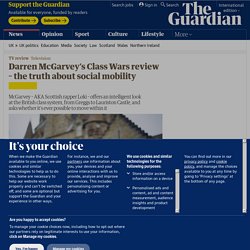 Mostly, I presume, for ease of understanding and smoothness of communication – there’s a reason we took to standardised spelling after all – but partly, I suspect, because it allows prejudice and mockery to slip in. Either from the writer’s side or from the reader’s. We are free, but everywhere we are in sociolinguistic chains. Which makes reviewing the opening episode of the four-part documentary Darren McGarvey’s Class Wars (BBC Scotland) a very interesting proposition. Polari, a vibrant language born out of prejudice. Polari (also spelt Palarie, Parlary, Palare and various other ways) is a form of language that is most commonly associated with gay men (and to a lesser extent lesbians), used in the first two-thirds of the 20th century in British cities that had large and mainly underground gay subcultures. 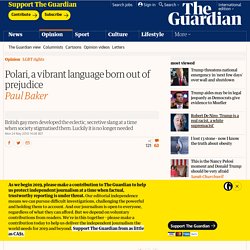 The language was particularly well known in London and was associated with chorus boys who danced and sang in West End productions, and male prostitutes who drank endless cups of tea in seedy cafes hanging out around Piccadilly ("the dilly") looking for "steamers" (clients). Chaps who joined the merchant navy after the second world war looking for a glamorous life of travel to exotic lands while working as dining staff or stewards also used Polari, adopting new words from languages encountered around the globe.

These were not the butch sailors of Jean Genet – instead they were the outrageous precursors to today's camp flight attendants. Paul Baker - What is polari? What is Polari? 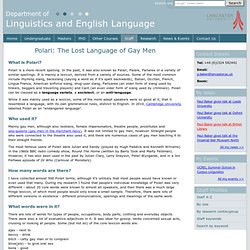 Polari is a more recent spelling. In the past, it was also known as Palari, Palare, Parlaree or a variety of similar spellings. It is mainly a lexicon, derived from a variety of sources. Some of the most common include rhyming slang, backslang (saying a word as if it's spelt backwards), Italian, Occitan, French, Lingua Franca, American airforce slang, drug-user slang, Parlyaree (an older form of slang used by tinkers, beggars and travelling players) and Cant (an even older form of slang used by criminals). Polari can be classed as a language variety, a sociolect, or an anti-language. BBC Radio 4 - Word of Mouth, Social Register. From Seaspeak to Singlish: celebrating other kinds of English.

It was recently reported that the government is being urged to create opportunities for Britons to learn languages like Polish, Urdu and Punjabi, in order to effect more social cohesion. 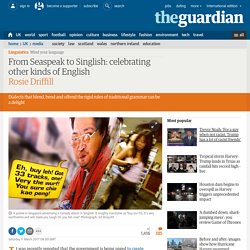 According to Cambridge professor Wendy Ayres-Bennett, language learning, and indeed social integration, should not be a one-way street; rather, the onus should also fall on British people to learn community languages. Demystifying the language of the courtroom. BBC Radio 4 - Word of Mouth, NHS language use. From SWI to AIBU: How Mumsnet created a whole new language. Name: Mumsnet slang Age: Almost 20 years old. 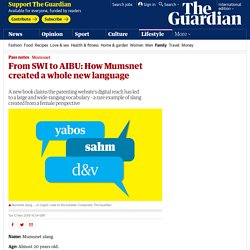 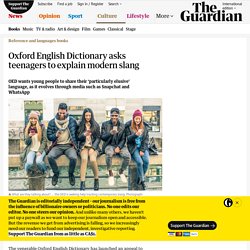 Citing its aim to “record all distinctive words that shape the language, old and new, formal and informal”, the OED said that slang terms were “always challenging” for dictionary editors to track. Young people’s language today is “particularly elusive”, because terms change rapidly and communication methods such as WhatsApp and Snapchat have made it more difficult to monitor the changing vocabulary. In its youth slang appeal, the dictionary is asking children and teenagers to send in examples of current slang words, either on Twitter at #youthslangappeal or via its website.

Adults are also invited to contribute, if they have examples of young people using “words that are completely unfamiliar to you – or familiar words in very unfamiliar ways”. … we have a small favour to ask. Why Do Adults Talk Like Children? Examples of kidspeak are everywhere, once you start to look. 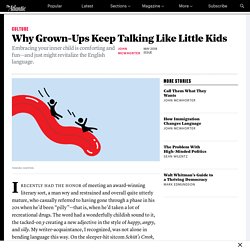 Take our newfangled use of the word because, as seen in sentences such as I believe in climate change because science and You’re reading this article because procrastination. Even 10 years ago, such constructions would have sounded like a clear grammatical error from someone still learning to speak English; today, they have become so widespread that the American Dialect Society crowned because 2013’s Word of the Year. Know a 'gomer' from a 'DSTO'? Oxford Dictionary appeals for work slang. The Oxford English Dictionary (OED) is launching a public appeal to help illuminate the sometimes impenetrable terminology used by different professions, from healthcare workers’ calling difficult patients “gomers” (an acronym for Get Out of My Emergency Room) to what exactly builders are up to when they “dob and dab”. 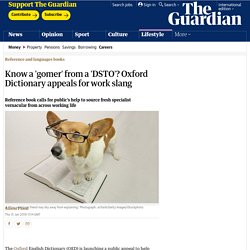 On Thursday, the dictionary called on doctors, firefighters, builders, shopkeepers, teachers, plumbers, marketers and other workers to send in the words and expressions they use at work. “The OED already includes many terms from all kinds of trades and professions but there are many more that have not yet come to our attention – and that’s why we’re asking for your help,” it said. The dictionary admitted that the baffling nature of work-related slang was sometimes necessary. “When we use words every day at work, it’s difficult to imagine that their meanings might not be quite so obvious to other people,” said OED senior editor Fiona McPherson. Why you shouldn’t get salty if your child ‘speaks YouTube’ As Fred Astaire and Ginger Rogers once sang, the difference between British and American English used to come down to whether someone said “tomato” or “tomAto”. 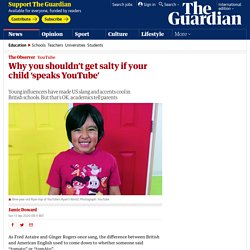 Now though the lines are becoming increasingly blurred as the words, intonation and accent used by US internet stars are adopted by their young British fans. A survey of 3,000 childcare providers and teachers for Childcare.co.uk, an online platform for childcare providers, parents, schools and tutors, has found that a quarter of primary school teachers are now familiar with the “YouTube accent” phenomenon – when children adopt an American accent or slang as a result of watching YouTube videos and television shows during lockdown.

She cited the example of working-class and lower middle-class men in the UK using dialect and swear words to demonstrate their masculinity. Other children could be seeking a form of “accommodation”, Setter suggested. “It’s very easy to overstate the effect and impact of very small changes in speech. BBC Radio 4 - Word of Mouth, Slang. Weekly Word Watch: muggle off, munchkin, and päntsdrunk. We’ve got a hearty serving of words this week, generously topped with mayonnaise, mispronunciations, and M-words. 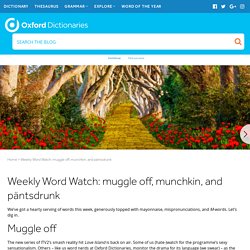 Let’s dig in. The new series of ITV2’s smash reality hit Love Island is back on air. Pidgin, patois, slang, dialect, creole — English has more forms than you might expect. There are probably as many terms for different kinds of English vernacular as there are vernaculars themselves: pidgin, patois, slang, creole dialect and so on. But while we usually think of the vernaculars as oral versions of the English language, they're making their way into the written word as well.

“There's a really interesting paradox going on, where you're taking something that's constantly changing — and that people don't expect to see written down — and you're making it codified and setting it down for a wider audience," says Dohra Ahmad, editor of an anthology of vernacular literature called "Rotten English. " M. NourbeSe Philip, one of the authors included in the anthology, speaks and writes Trinidadian Creole but points out that the process of getting the language on the page is much the same as writing in Standard English. “You can’t write it exactly as the person speaks it," she says. The creole continuum. The much-loved “jive talk” scene from the comedy film Airplane! Is an amusing if slightly improbable demonstration of how a single language – in this case English – can accommodate varieties so divergent as to be mutually incomprehensible. People with Birmingham and Afro-Caribbean accents still face bias in Britain, study shows.

An "enduring hierarchy of accents" still exists in the UK with working class Birmingham and Afro-Caribbean accents facing the worst social bias, a new study has found. Public attitudes to different accents and their related stereotypes has remained largely unchanged over time, the Queen Mary University of London study found.

Researchers examined current attitudes to accents with those shown by comparable surveys 15 years ago and 50 years ago. Jamila Lyiscott: 3 ways to speak English. Sonny`s lettah Linton Kwesi Jhonson. CREOLE ENGLISH AND BLACK ENGLISH. By Mark Sebba Department of Linguistics and English Language Lancaster University Lancaster LA1 4YT, England e-mail: M.Sebba@lancaster.ac.uk © 2002 Mark Sebba. Linguistics Research Digest: Multicultural London English. London English has a new pronoun. Young people living in multicultural areas of the inner city use man as an alternative to I. Sometimes the meaning could be indefinite: in the caption to the picture Alex’ man pronoun could perhaps be replaced by you (in its general sense of ‘anyone’) or even one; but in other examples, like (1) below, man refers quite unambiguously to the speaker.

BBC Radio 4 - Radio 4 in Four - 17 Multicultural London English words and what they mean. From the mouths of teens - This Britain - UK - The Independent. Multicultural London English 'Oo' Why are so many middle class children speaking in Jamaican patois? A father of an 11-year-old girl laments a baffling trend. By Nick Harding Published: 00:19 GMT, 11 October 2013 | Updated: 11:11 GMT, 11 October 2013. A nang new accent. TEDxEastEnd - Paul Kerswill - Who's an Eastender now?

Susie Dent's Modern Tribes: Brits have perfected a secret version of the English language to use with their co-workers — Quartz. Speaking it in the family. Future - The secret “anti-languages” you’re not supposed to know. Dictionary of English slang and colloquialisms of the UK. The Online Slang Dictionary. In praise of the C-word. At the risk of sounding like a right “CU Next Tuesday”, I think it’s high time we had a frank discussion about the use of the C-word in modern British English and how its usage appears to be increasing in recent years. Slang: the changing face of cool. Youthslang.doc. Mind your slanguage, and don't be an erk. YOLO. The borderline-cult film Mean Girls contains an amusing insight into young people's eagerness to leave their linguistic trademark on the world. A call to arms: let's get rid of all the jargon! Language and occupation.

Introduction This guide is written for students who are following GCE Advanced level (AS and A2) syllabuses in English Language. This resource may also be of general interest to language students on university degree courses, trainee teachers and anyone with a general interest in language science. Care home in Yorkshire told not to call residents 'love' as it is 'patronising' Antarctic Slang and jargon. 14 words you understand only if you work for Google. Free guides. Discourse Community. Linguistics Research Digest: Search results for community of practice.