Mapping for Change. WeGovNow is a three year research and innovation project focusing on civic participation in local government. 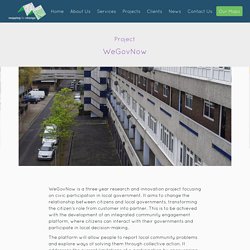 It aims to change the relationship between citizens and local governments, transforming the citizen’s role from customer into partner. This is to be achieved with the development of an integrated community engagement platform, where citizens can interact with their governments and participate in local decision-making. The platform will allow people to report local community problems and explore ways of solving them through collective action.

Civic planners. Events - CDNLCDNL. A Call for Action – Raising the Profile of Community Development Across London - Friday 17th March 2017 A Storify containing all the tweets, images and videos from the event can be found here. 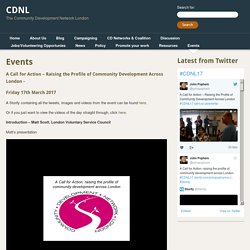 Or if you just want to view the videos of the day straight through, click here. Introduction – Matt Scott, London Voluntary Service Council. About. Commonplace. News and Comments – INURA. 12. 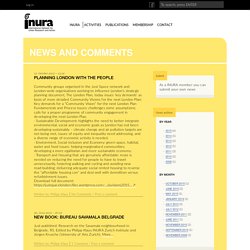 October 2015 – 13:19 Planning London WITH the people 30. Planning Aid for London. What is 'extreme' citizen science? Citizen Science is hardly a new concept, but during the last decade it has seen a rise in both academic and popular interest for the topic. 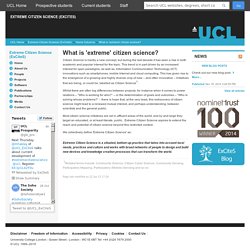 This trend is in part driven by an increased interest for open paradigms, as well as, Information Communication Technology (ICT) innovations such as smartphones, mobile Internet and cloud computing. This has given rise to the emergence of a growing and highly diverse crop of new – and often innovative – initiatives that are being, or could be, labelled as Citizen Science1. Whilst there are often big differences between projects, for instance when it comes to power relations – “Who is working for who?”

– or the determination of goals and outcomes – “Who is solving whose problems?” Database. Good London. Just Space community conference. Just Space conference 10 and 11 July 2015 at the Bromley by Bow Centre Programme: reproduced below together with content (being added as it becomes available). 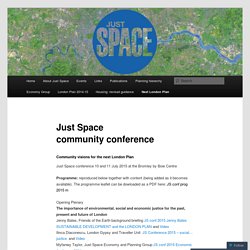 The programme leaflet can be dowloaded as a PDF here: JS conf prog 2015 m Opening PlenaryThe importance of environmental, social and economic justice for the past, present and future of London Jenny Bates, Friends of the Earth background briefing JS conf 2015 Jenny Bates SUSTAINABLE DEVELOPMENT and the LONDON PLAN and Video Ilinca Diaconescu, London Gypsy and Traveller Unit JS Conference 2015 – social… justice and Video Myfanwy Taylor, Just Space Economy and Planning Group JS conf 2015 Economic Justice and Video. This Happened - London’s Videos on Vimeo. Kelvin Campbell speaks at Alan Baxter about Massive Small. Publications - Umbrellium. Entitlement, which defines who can access your IoT device data, and under what conditions it can be found and used by others, is one of the major challenges that needs to be resolved in the Internet of Things. ... 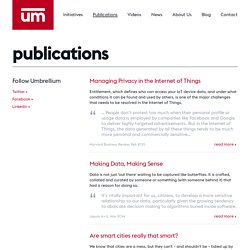 People don’t protest too much when their personal profile or usage data is employed by companies like Facebook and Google to deliver highly targeted advertisements. But in the Internet of Things, the data generated by all these things tends to be much more personal and commercially sensitive... Data is not just 'out there' waiting to be captured like butterflies. About Us. We are the national membership body for local (parish and town) councils. 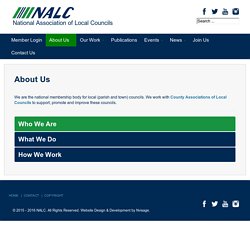 We work with County Associations of Local Councils to support, promote and improve these councils. NALC is the only national body specialising in the work of local councils.