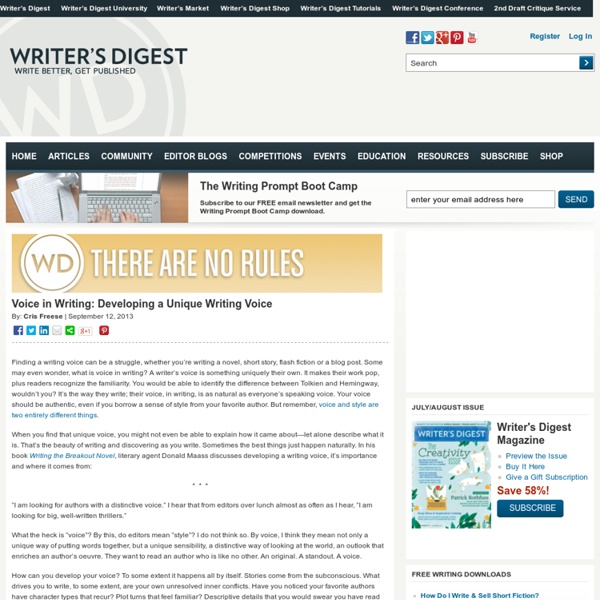 Finding a writing voice can be a struggle, whether you’re writing a novel, short story, flash fiction or a blog post. Some may even wonder, what is voice in writing? A writer’s voice is something uniquely their own. It makes their work pop, plus readers recognize the familiarity. You would be able to identify the difference between Tolkien and Hemingway, wouldn’t you? It’s the way they write; their voice, in writing, is as natural as everyone’s speaking voice. When you find that unique voice, you might not even be able to explain how it came about—let alone describe what it is. “I am looking for authors with a distinctive voice.” What the heck is “voice”? How can you develop your voice? You can facilitate voice by giving yourself the freedom to say things in your own unique way. Science fiction writer Neal Stephenson has a unique voice. The Deliverator’s car has enough potential energy packed into its batteries to fire a pound of bacon into the Asteroid Belt. Oho. You might also like:

Flirting and Writing Dialogue I love exposition: flowing sentences, tight action, enveloping description. Prose is great. But for the past couple of weeks, I’ve been wondering what makes dialogue tick. Well-written dialogue is not conversation. Writing Dialogue with Game It’s a great feeling when our game is on, and every exchange is tantalizing, enticing, teasing, and provocative. Functional versus Emotional Dialogue Good dialogue works the same way. Less is More: Make Every Word Count When I have been particularly flirtatious (not that it happens often, but it has happened…once…I think), I feel like every sentence, every word I uttered made the other person dig me more. Imagine you’re trying to ask someone out to dinner. Probably the best tool I’ve found to find the happy medium is the comic book panel. A good rule of thumb is for panels to not exceed twenty-five words of dialogue. There. What did you say? Clarity’s another important factor. . Like so many aspects of writing, this is a balancing act. . Like this:

Important Writing Lessons From First-Time Novelists KIRA PEIKOFF (kirapeikoff.com) is the author of the acclaimed thriller Living Proof (Tor Books). She holds a bachelor’s degree in journalism from New York University and is a candidate for a Master of Science in bioethics at Columbia. She has written for The Daily News, Newsday, The Orange County Register and New York magazine. For several years, she worked in the editorial departments of two major publishing houses; currently she teaches writing and is at work on her second novel. Here’s something most published pros know well: In this business, there are no absolutes. The journey to bookstores seems to be a lot like that old snowflake cliché—No two are alike. And no one illustrates this fact better than debut novelists. —by Zachary Petit, former senior managing editor of Writer’s Digest Consider Lissa Price, Melinda Leigh, Carter Wilson, Kira Peikoff and Eyre Price: One pursued publication for 30 years. They ran the gauntlet and emerged on the other side with a book in their hands. E. L.

Linguistic Atlas Psychologists Discover How People Subconsciously Become Their Favorite Fictional Characters Psychologists have discovered that while reading a book or story, people are prone to subconsciously adopt their behavior, thoughts, beliefs and internal responses to that of fictional characters as if they were their own. Experts have dubbed this subconscious phenomenon ‘experience-taking,’ where people actually change their own behaviors and thoughts to match those of a fictional character that they can identify with. Researcher from the Ohio State University conducted a series of six different experiments on about 500 participants, reporting in the Journal of Personality and Social Psychology, found that in the right situations, ‘experience-taking,’ may lead to temporary real world changes in the lives of readers. They found that stories written in the first-person can temporarily transform the way readers view the world, themselves and other social groups. "Experience-taking is much more immersive -- you've replaced yourself with the other," Libby said in a statement.

The 7 Narrator Types: and You Thought There Were Only Two! - bekindrewrite Photo by Charles Hutchins There are all kinds of narrators–going way beyond simple first or third person. Here’s a little study of the different types. First Person 1. Relatively straightforward, this is a story the hero narrates. …I take up my pen in the year of grace 17–, and go back to the time when my father kept the “Admiral Benbow” inn, and the brown old seaman, with the saber cut, first took up his lodging under our roof. 2. Someone close to the protagonist, but not the main hero. “Dr. Third Person Third person omniscient This type knows all, peeking into the lives of major and minor characters, reading everyone’s thoughts. Third person limited This type knows only what the main character, or characters, know. The following types can fall into either omniscient or limited: 3. A detached third person narrator sticks to telling the story, and never inserts his own opinions—never slips in an “I” or a “me” except in direct dialogue. 4. Somewhere in Between 5. 6. “Lemony?” 7. Example:

Writing Thesauruses 3 Steps to Writing a Novel with Unforgettable Characters Character development is one of the first essential steps of writing a novel and it involves creating the people who will carry out your story. There will most likely be a variety of characters needed for your story, but none as important as your lead character – your protagonist. A well-developed protagonist has much to do with the success of writing a novel. When writing a novel, the protagonist should be someone that your readers feel is a “real person” that they come to love (or at least like a whole lot), can relate to in many ways, and will care about and think about long after they’ve turned the final page on your novel. How to Create “Real People” for Your Novel When writing a novel, there are many ways to go about creating characters and much has been written about it in “how to write a novel books”, sometimes in great detail. Writing a Novel – Four Attributes of a Lead Character: 1. 2. 3. 4. Writing a Novel – Three Attributes Every Character Has: 1. 2. 3. 1. 2. 3.

Empowering Writers "Teaching Voice in Writing" - Empowering Writers We’ve all heard teachers talk about “voice” – how a piece of writing somehow has it – or doesn’t. Often referred to as “author’s voice, it is a frequently misunderstood concept, an illusive quality that often seems difficult, if not impossible to teach. In fact, some people feel that authors are either blessed with the gift of “voice” or not, or they believe that writers can only discover their voice through writing a lot. While it’s true that consistent practice in the art and craft of writing is a necessity for improvement, it is also true that an understanding and emergence of voice can be nurtured and honed through awareness, discovery and informed teaching. Download – “Teaching Voice in Writing” Lesson Download – “Setting the Tone” Lesson Download – “Setting the Mood” Lesson Let’s begin with a definition of “voice”. The term “author’s voice” has no place in narrative writing. This is precisely why “author’s voice” does not apply to narrative writing. It was so way hot and phew!