How to win friends & influenence people by Dale Carnegie 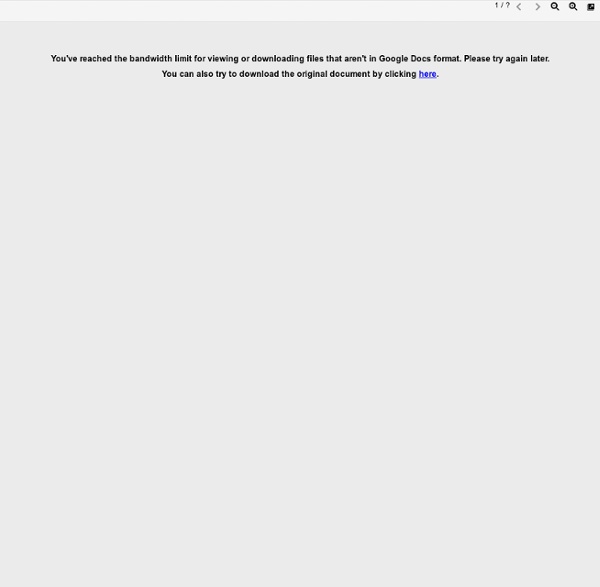 Dropmark brings dead simple collaboration into the cloud [invites] Every once in a while, there’s an app or product that comes out and blows everybody’s minds. Not long ago, Dropbox opened our eyes to how simple sharing and storing files in the cloud can be. Oak, a design studio based out of Brooklyn, NY, has been quietly working away on Dropmark, and released a teaser video (below) nearly a year ago. Finally, the time has almost come for the whole world to see the fruit of Oak’s labor, and rest assured, this product is so perfect and dead simple that it just might knock you off your feet like Dropbox did. Dropmark lets you drag and drop files and links from your desktop and Web browser to be instantly uploaded into collections in the cloud. So, a place to save and share content with a fresh interface sounds interesting, but certainly isn’t ground-breaking. From Dropmark: Drop files right from your computer or the web to create organized collections—bringing together information like never before.

The Secret to Not Caring What People Think Whether it is becoming plugged into our identity, quitting alcohol or even becoming more confident, our worry of what people think can really affect us. From the jobs we choose, to the people we date and the risks we take, we often limit our actions through fear of criticism or judgment from others. This is a serious issue, and a problem many people experience, therefore I’ve taken my personal experience and the advice of others to reveal the secrets to not caring what people think. Why we Care what people Think First of all, I want to say that sometimes caring what people think is not a bad idea; the part of our mind that produces this fear is often in place to protect us. I’ve spent months trying to understand why we care what people think, and as (surprisingly) usual, the answer is relatively simple and the heart of what this website is about. What people say about you is none of your business- Sean Stephenson Of course, your identity is not what people think of you, it is just…you. 1.

Daily Zen List 25 Business Lessons and Life Lessons from AIESEC - Transpiral A month ago I had the wonderful opportunity to chair an AIESEC conference after five years of being missing in action. It was amazing to reflect on and realize how much I have grown after my five-year investment into AIESEC. AIESEC has been the major defining factor of my success because it gave me loads of opportunities to fail… yes to fail, because if are not comfortable with failing then you can never succeed. Here are 25 business lessons you can learn from AIESEC. 1. Every AIESECer has to do this no matter how ridiculous. I think about the Harlem Shake I was part of or belly dancing in front of 1000 people in Estonia and realize without AIESEC I wouldn’t have done those things. 2. When I joined AIESEC, I could barely speak in front of a crowd. During my experiences, I even had the opportunity to run workshops internationally in Singapore, Morocco, Tunisia and Turkey to over a 1000 people from 100 countries. 3. 4. 5. The art of acknowledgement! 6. 7. 8. 9. 10. 11. 12. 13. 14. 15. 16.

The Single Largest Collaboration-Killing Mistake You’re Unaware Of There’s a lot of talk about how to get the most out of teams today. Do you define strict roles for each team member? Is it all about outlining the approach? Traditionally, when teams set out on a project they are handed a detailed approach by their leader. Instead of this “traditional” view of team projects, Erickson suggests that team leaders should take a new approach. “research has shown that … collaboration improves when the roles of individual team members are clearly defined and well understood – in fact, when individuals feel their role is bounded in ways that allow them to do a significant portion of their work independently. Turns out that assigning roles, not the approach, actually increases team collaboration. In this new approach to team collaboration, team leaders should take it upon themselves to “ensure that the roles and responsibilities of the team members are clearly defined for the specific project at hand.” Image Source: www.iStockphoto.com Related

Update the Relationship Learn-in. in Archives Learn-ins Forum Repost ***Warning: These exercises are not to be used by anyone with a history of mental illness, severe trauma, or panic. Those challenges are best handled with a therapist. The following couples exercises are based on Martin Seligman's Positive Psychology approach. (c) Steve Mensing EMOCLEAR POSITVE PSYCHOLOGY COUPLES EXERCISE I: Doing Pleasurable, Important, and Meaningful Activites together. Daily for two weeks do the following: (1) Choose a pleasurable activity to do together and do it to completion. (2) Choose an activity you both deem important or meaningful and do it to completion. (3) Later in the day record what occured in your life during and at the conclusion of the activities. (4) Notice how your choices and actions made these good, important, meaningful, and pleasurable activities happen. (5) Do 2 new pleasurable, meaningful, or important activities each day for two weeks before switching to another Emoclear Positive Psychology Couples Exercise. The Activity List: 1. 2. 3. 4.

Watch Free Documentaries Online | Documentary Heaven Group cohesiveness When discussing social groups, a group is said to be in a state of cohesion when its members possess bonds linking them to one another and to the group as a whole. Although cohesion is a multi-faceted process, it can be broken down into four main components: social relations, task relations, perceived unity, and emotions.[1] Members of strongly cohesive groups are more inclined to participate readily and to stay with the group.[2] Definition[edit] There are different ways to define group cohesion, depending on how researchers conceptualize this concept. Cohesion can be more specifically defined as the tendency for a group to be in unity while working towards a goal or to satisfy the emotional needs of its members.[4] This definition includes important aspects of cohesiveness, including its multidimensionality, dynamic nature, instrumental basis, and emotional dimension.[4] Its multidimensionality refers to how cohesion is based on many factors. Causes[edit] Attraction[edit] Factors[edit]

Tapping our powers of persuasion Most psychologists will read this “Questionnaire” with Robert Cialdini, PhD. That may or may not be true, but according to Cialdini, that statement is powerfully persuasive because we tend to go along with our peers. Cialdini, who retired last year from a teaching and research position at Arizona State University in Tempe, Ariz., is a renowned expert in the science of swaying. In his seminal book on the topic, “Influence: The Psychology of Persuasion” (Quill, 1984), he went undercover to learn the tricks mastered by used-car dealers and Fortune 500 executives alike, bringing persuasion research to psychology’s forefront. Cialdini distilled his findings into six “weapons of influence,” each grounded in how we perceive ourselves or others: Reciprocity: We inherently want to return favors. In recent years, Cialdini has been leveraging those weapons to address major world problems such as climate change by persuading people to reduce energy use. I think it’s a little too early.

Solar System Scope Why Teamwork is Overrated Does teamwork always enhance the performance of organisations? It might seem like a question that’s too obvious to ask. Practically every job description ever written demands ‘a good team player’. Teams of all kinds pop up everywhere in organisations and the assumption is that they enhance organisational performance. In fact the evidence for the supposedly stupendous power of teams is pretty weak. Far from finding a huge boost to performance from teamwork, the studies are neutral or only show small benefits (Allen & Hecht, 2004). High performing groups are not normal, instead groups often have huge variations in ability from top to bottom.People in groups often waste time squabbling over goals.Groups frequently suffer downward performance spirals. The message from the research is clear: the benefits of teamwork are nowhere near as clear as the fashion would suggest. Obviously sometimes people do work together much better in teams. But many, many jobs don’t have these characteristics.