Using Music in the ESL Classroom 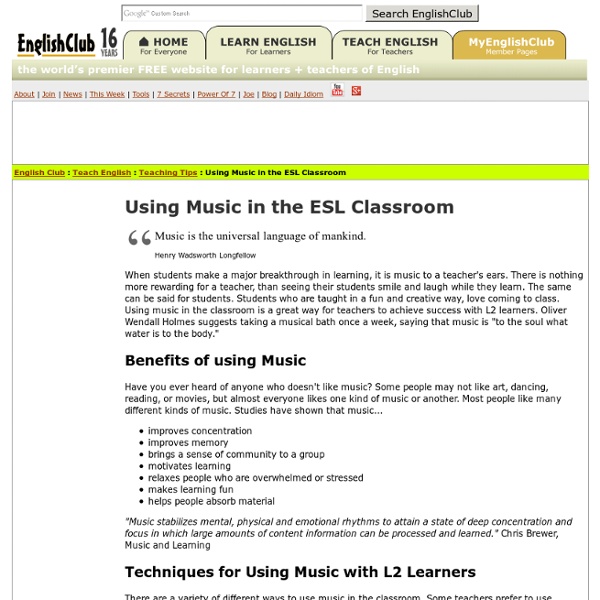 Music is the universal language of mankind.Henry Wadsworth Longfellow When students make a major breakthrough in learning, it is music to a teacher's ears. There is nothing more rewarding for a teacher, than seeing their students smile and laugh while they learn. The same can be said for students. Benefits of using Music Have you ever heard of anyone who doesn't like music? "Music stabilizes mental, physical and emotional rhythms to attain a state of deep concentration and focus in which large amounts of content information can be processed and learned." Techniques for Using Music with L2 Learners There are a variety of different ways to use music in the classroom. Suggested Activities Many teachers try using music once in the class, but forget to do it again. Teaching Kids with Music Using music with ESL kids has all of the same benefits mentioned above and more. Tips for Using Music Effectively Online Materials and Resources

Using music and songs Using music and songs Submitted by admin on 7 October, 2011 - 07:58 Music can play a really important part in the language classroom. It can change the atmosphere in the room within seconds. Songs sung in English are listened to around the world and students can often feel real progress in their level of English when they can begin to sing along to the chorus or even just to be able to separate what at first seemed to be a constant stream of words! I am going to split this article into using music and using songs and I will share twelve of my favourite activities with you. Before bringing music into the class, it may be worthwhile to do a music survey or questionnaire to find out what the students enjoy listening to. Using music Music in the classroom doesn’t always mean listening to a song and using the lyrics in some way. Set the scene: If music is playing as students enter the class it can be a nice way to settle the group. By Jo Budden

Classical Music, Youth & Social Change | A Hopeful Sign (Post by MARILYN PRICE-MITCHELL) Henry Wadsworth Longfellow once said, “Music is the universal language of mankind.” If you are a musician or one at heart, you probably know that something magical exists between the notes that connect us to others despite our differing cultures, religions, or political preferences. In fact, research shows a great deal about music that benefits all of us and particularly how it contributes to the development of children and adolescents. According to the research article, Childhood Music Lessons May Provide Lifelong Boost in Brain Functioning, music lessons can pay off for decades, even for those who no longer play instruments. Research also supports how music nurtures children’s success at school and in life. While recent research is fueled by neuroscience, there is also solid evidence that music programs help develop internal strengths in children, like initiative, creativity, resiliency, and a belief in self. Can Music Foster Social Change?

The Ultimate List of Online Music Education Games Having a background as a music teacher, I often get the asked what resources are available for homeschoolers to grow in their music studies. As such, today I’d like to share with you an Ultimate List of Online Music Education Games available for FREE to public and homeschoolers alike to have fun while learning more about music. Whether playing via iPad, SmartBoard, or laptop, each resource provides supportive games and activities to reinforce music concepts at home. For your browsing convenience, these online music education games are organized into the following categories: aural training, composers, composition, instruments, notation, symbols/vocabulary and variety. Aural Training Composers Composition Musical Instruments Notation Symbols and Vocabulary Variety These websites could not be limited to one particular musical focus but have several online music education games covering a wide-variety of musical instruments and elements. SFS KidsThe New York Philharmonic Kids Zone

A different way to visualize rhythm - John Varney To learn more on circular perceptions of rhythm with specific reference to African music, read this paper and then watch this Five(ish) Minute Drum Lesson on African Drumming. How has drumming played an essential role in African culture? What do specific rhythms represent? Interested in the software applications of a circular rhythmic approach? What exactly is rhythm? How does the beat of a song differ from its rhythm? As seen from this TED Ed lesson, different cultures share similar rhythms. Rhythm and Math are related? Just love music and want to learn more? How playing an instrument benefits your brain - Anita Collins Why we love repetition in music - Elizabeth Hellmuth Margulis Music as a language -Victor Wooten

Great Performances . Educational Resources GREAT PERFORMANCES offers online lesson plans and activities for elementary, middle school, and high school teachers. The series' programs may be taped and used for educational purposes. Peter and the Wolf Grades: 4-6 Sergei Prokofiev wrote "Peter and the Wolf" in 1936 to introduce children to classical music. Musical Theater: "Company" Grades: 9-12 Students will form opinions about social attitudes and stereotypes; analyze quotes and songs to determine character traits, themes, and conflicts within the story; and discuss social attitudes and stereotypes presented in the musical. Regional Performance: Eric Clapton Crossroads Guitar Festival Chicago Grades: 6-12 Students will research information about the blues and its origins, compare and contrast blues performances in terms of style and artistry, and discuss or write about how the blues has influenced modern music. Dance: Nureyev: The Russian Years Grades: 7-12 Regional Performance: Respect Yourself: The Stax Records Story