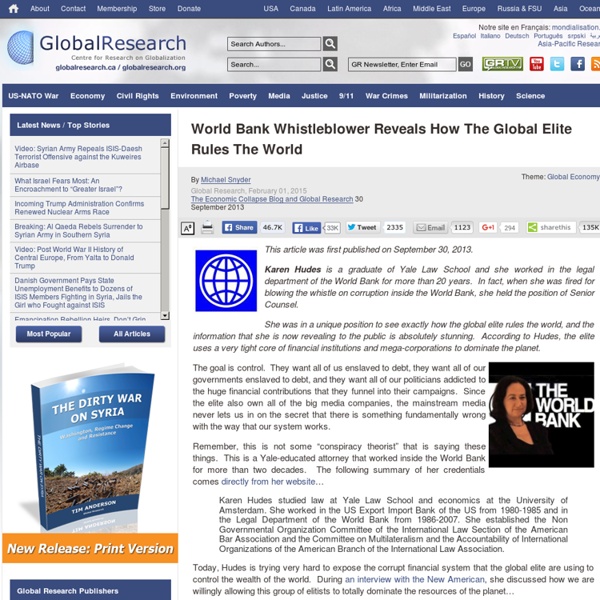 This article was first published on September 30, 2013. Karen Hudes is a graduate of Yale Law School and she worked in the legal department of the World Bank for more than 20 years. In fact, when she was fired for blowing the whistle on corruption inside the World Bank, she held the position of Senior Counsel. She was in a unique position to see exactly how the global elite rules the world, and the information that she is now revealing to the public is absolutely stunning. The goal is control. Remember, this is not some “conspiracy theorist” that is saying these things. Karen Hudes studied law at Yale Law School and economics at the University of Amsterdam. Today, Hudes is trying very hard to expose the corrupt financial system that the global elite are using to control the wealth of the world. Previously, I have written about the Swiss study that Hudes mentioned. But the global elite don’t just control these mega-corporations. This system did not come into being by accident. Related:  Whislteblowers

Glenn Greenwald: 'I don't trust the UK not to arrest me. Their behaviour has been extreme' | World news The dogs can smell Glenn Greenwald long before they see him. As we drive up the hill to his house, a cacophony of barking greets us. The chorus is so overwhelming it makes me think of the National Security Agency (NSA) chiefs who Greenwald has tormented over the past year."They don't bite," Greenwald says as we are engulfed by the pack of strays that he and his partner, David Miranda, have rescued. After a beat, he adds: "… as long as you don't show any fear." The image of Greenwald and his dogs has been beamed around the world by news organisations since his first NSA revelations were published by the Guardian last year. But the sight of him surrounded by the animals still comes as a shock. Think of that legendary 1973 photograph of Bob Woodward and Carl Bernstein at the height of Watergate. It would be rash, though, to describe his working day as ordinary. "I don't trust them not to detain me, interrogate me and even arrest me. He insists he has never had animosity towards Britain.

Pope Francis: Church Would Baptize Aliens Researchers say they’ve uncovered more than 1,000 items lifted from other authors in Dylan’s Chronicles. And that’s just the beginning. For half a century, fans of rock’s enigmatic poet laureate have picked apart his words—and even his garbage—searching relentlessly for hidden meaning. Now a small band of Dylan sleuths led by an Albuquerque disc jockey may finally have found the key … but, to what? In recent years, the singer’s followers have been quietly uncovering clues to what New Mexico DJ Scott Warmuth calls Bob Dylan’s own personal “Da Vinci Code,” a hidden metatext within his acclaimed 2004 memoir, Chronicles: Volume One, full of fabrication, allusion, and widespread appropriation of material from a vast and surprising spectrum of sources. “If you’re dumb enough to believe this is like a student plagiarizing a paper in school, that’s your own problem.” “There are a couple of different reactions to it,” Kinney told The Daily Beast. “You can’t repeat the past.”

Glenn Greenwald: the explosive day we revealed Edward Snowden's identity to the world On Thursday 6 June 2013, our fifth day in Hong Kong, I went to Edward Snowden's hotel room and he immediately said he had news that was "a bit alarming". An internet-connected security device at the home he shared with his longtime girlfriend in Hawaii had detected that two people from the NSA – a human-resources person and an NSA "police officer" – had come to their house searching for him. Snowden was almost certain this meant that the NSA had identified him as the likely source of the leaks, but I was sceptical. "If they thought you did this, they'd send hordes of FBI agents with a search warrant and probably Swat teams, not a single NSA officer and a human-resources person." Whatever the news meant, it underscored the need for Laura Poitras – the film-maker who was collaborating with me on the story – and I to quickly prepare our article and video unveiling Snowden as the source of the disclosures. "Um, my name is Ed Snowden," the now-famous film begins. Revealed to the world

Credit Suisse Set to Plead Guilty in Tax Evasion Case Arnd Wiegmann/ReutersThe headquarters of Credit Suisse in Zurich. Credit Suisse is about to do what no other huge bank has done in over two decades: plead guilty to criminal wrongdoing. In a sign that global banking giants are no longer immune from criminal charges — despite public concerns that financial institutions have grown so large and interconnected that they are “too big to jail” — federal prosecutors demanded that Credit Suisse’s parent company plead guilty to helping thousands of American account holders hide their wealth and evade taxes. The Justice Department filed a criminal information in Federal District Court in Alexandria, Va., outlining the case against the bank. Credit Suisse is scheduled to plead guilty at a court hearing later on Monday. As part of a deal that the Justice Department is expected to announce, the Swiss bank agreed to plead to one count of conspiring to aid tax evasion. It took months of careful planning. The Credit Suisse plea won’t be the last.

Bankers killing bankers for the insurance money and another look at 9/11 — RT Op-Edge Max Keiser, the host of RT's ‘Keiser Report,’ is a former stockbroker, the inventor of the virtual specialist technology, virtual currencies, and prediction markets. Published time: May 14, 2014 19:12 Reuters / Daniel Munoz Two big, macabre stories came out of Wall Street recently: the rash of banker deaths by apparent murder and/or suicide, and speculation that bank CEOs themselves are behind the trend to cash in on the insurance. It turns out that banks take out life insurance policies on their employees, and those policies pay out death benefits to the banks – not the families. Should we be surprised by this banker-on-banker death scam? Jim Rickards is both a Washington insider and a Wall Street insider. I've interviewed Jim Rickards on my show 'Keiser Report' many times and spent time with him personally comparing notes from our Wall Street days. Reuters / Brendan McDermid

Internet Control: Obama Blames Internet for 'Domestic Terrorism' In another verbal assault on net neutrality, Obama is now warning that both recent and future acts of terrorism stem from the accessibility of information on the internet. In his speech yesterday, Obama said that information available online fuels ‘violent agendas’ through ‘hateful propaganda’ that drives terrorism. Warning that ‘internet materials’ are fueling domestic terror threats and actually causing people to go out and commit mass acts of terrorism, Obama is once again following in the footsteps of his fellow control freak associates in assaulting the openness of the internet that is now a hot spring for alternative news amid the frozen depths of the mainstream media. In the speech, Obama said : “Today, a person can consume hateful propaganda, commit themselves to a violent agenda and learn how to kill without leaving their home.” The simple reality is that the internet is the largest threat to corrupt government officials. Category : Internet Freedom

Gabriel Magee jumped to his death from top of JP Morgan's London HQ 'Brilliant' Gabriel Magee had repeatedly tried to get on Canary Wharf roofIn January he broke through hatch and jumped as workers arrivedEx-girlfriend spoke of his interest in students who died in a suicide pact 'That was something Gabe thought about a lot', she told his inquest Coroner records suicide verdict driven by mental illnessFather accused firm of 'murder by omission' for failing to stop himJP Morgan head of investigations said it is 'a place of work, not a prison' By Martin Robinson and Mario Ledwith Published: 15:25 GMT, 20 May 2014 | Updated: 09:47 GMT, 21 May 2014 A JP Morgan executive leapt to his death from the bank’s European headquarters in London after using bolt cutters to break out on to the roof, an inquest heard. Gabriel Magee fell 500ft to his death as horrified workers arrived at the building in Canary Wharf. A day earlier the ‘brilliant’ IT executive had written ‘jump’ on his computer. 'But he did have a darker side to him that I found was always there.

Dan Kennedy: Obama's War on Journalism Kudos to David Carr of the New York Times for shining a light on an issue that doesn't attract nearly the attention that it should: the Obama administration's abuse of the Espionage Act, which in turn has led to a virtual war on journalism and free expression. As Carr notes, the Espionage Act, approved in 1917 during the hysteria of World War I, was used three times before President Obama took office in 2009 -- and six times during his presidency. We live in a dangerous era, and there have been prosecutions with which it may be hard to disagree. Carr cites the case of Bradley Manning, who's been charged with stealing national-security documents that are at the heart of the WikiLeaks disclosures. But Carr also writes that leak prosecutions often seem to be aimed more at punishing people for embarrassing the government than for genuinely damaging national security. (More about the Kiriakou case from the Reporters Committee for Freedom of the Press. I can't tell you about that case.

China bans use of Microsoft's Windows 8 on government computers