How to Deliver Bad News in Writing 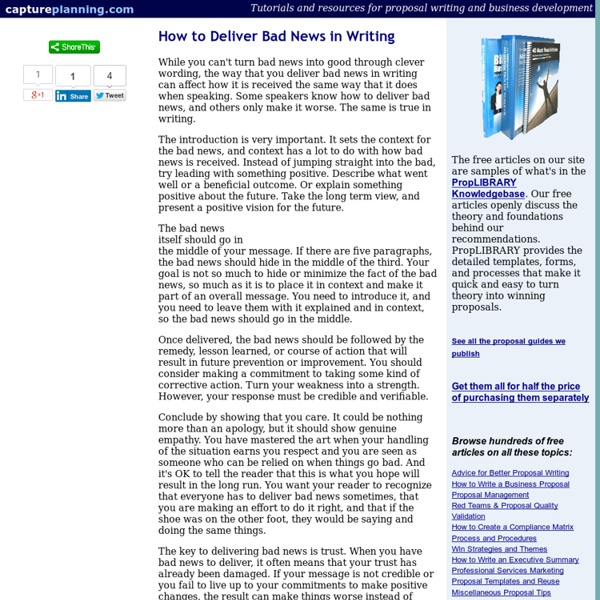 While you can't turn bad news into good through clever wording, the way that you deliver bad news in writing can affect how it is received the same way that it does when speaking. Some speakers know how to deliver bad news, and others only make it worse. The same is true in writing. The introduction is very important. It sets the context for the bad news, and context has a lot to do with how bad news is received. Instead of jumping straight into the bad, try leading with something positive. The bad news itself should go in the middle of your message. Once delivered, the bad news should be followed by the remedy, lesson learned, or course of action that will result in future prevention or improvement. Conclude by showing that you care. The key to delivering bad news is trust. By Carl Dickson, Founder of CapturePlanning.com Click here for more free articles like this one

How to Write an eBook that Makes Money (Even if you HATE Writing) In the last month I’ve talked a lot about affiliate marketing. So let’s shift focus and discuss the other way I make an online income – Selling eBooks. Affiliate marketing is an excellent business model. But I’ve found that offering an information product is how you make the real money. Currently I only have a single eBook offer. Yet this product nets me an average of $3,000 to $4,000 of income each month. In the last month you’ve heard me mention that I’m working on a massive eBook: Affiliate Marketing Without the Bulls**t Creating this product has been a grueling experience. I feel that many folks have trouble with the process of writing an eBook. Basically this is a crash course for non-writers on how to start and finish a lengthy information product. Step #1: Research eBook Ideas There’s been a lot written about picking a niche for an eBook. Others recommend looking at “problem keywords” and writing an eBook that provides a solution. These are all great ideas. Pick a Narrow Niche 1.

Etymology How to Market Your Freelance Writing Website so That Potential Clients Find You and Fall Over Backward to Hire You In last week’s Wealthy Web Writer e-letter, I shared a blueprint you can use when developing content for your professional freelance writing website. Just to recap, a professional website is one of the most powerful marketing tools you can have. It builds your credibility, helps you make contacts, and gives you an automatic way to build and nurture relationships with both clients and prospects. This week, as promised, I’m going to show you how to turn your website into a client magnet. How to Establish an Ongoing Relationship With Your Prospects and Clients There’s really no secret when it comes to establishing ongoing relationships with your website visitors. Start up an e-letter (or e-newsletter) — Adding a subscription box to your site and then sending out an e-letter is one of the first strategies you should consider. Marketing Your Site Once you have your site up and running, the next step is to attract traffic. Add your site URL to: Customer Convenience Pages A Few Final Tips

What are the Fallacy Files? I began collecting and studying logical fallacies about twenty-five years ago, when I first became interested in logic. This collection took two forms: A collection of named fallacies—such as "ad hominem"—that is, types of bad reasoning which someone has thought distinctive and interesting enough to name and describe. Some years after I began to amass these files, I wondered just what I ought eventually to do with them, how best to organize the information within them, and in what form to make them available to others interested in fallacy studies. Praise for the Fallacy Files Contribute to the Fallacy Files You can contribute fallacies and examples to the files by sending them to me. The Fallacy Files is an Amazon Associate and every time you click on a link to Amazon and make a purchase, the Fallacy Files will receive a small commission. Email Policy Any examples sent to The Fallacy Files or questions asked may be used in entries, the weblog, or other features. Advertisement Policy

Accents and Dialects Public Domain / CIA NOTE: This guide uses the International Phonetic Alphabet (IPA). For information about this notation, please visit my page of International Phonetic Alphabet Resources. There are obviously many North American accents. General American This refers to the spectrum of ‘standard’ English spoken by newscasters, TV actors, and a large percentage of middle-class Americans. Prominent Features: The short-a (as in cat) is raised and diphthongized before nasal consonants. Accent Samples: Eastern New England English This describes the classic “Boston Accent.” Non-rhoticity, as mentioned above.Fronted pronunciation of words like father and palm, so these are pronounced IPA faðə and pa:m (i.e. this vowel is close to the vowel in words like “cat” and “mad” in General American).Unlike most other American accents, the vowel in lot and rod is rounded as in most British dialects, pronounced IPA lɒt and ɹɒd (“lawt” and “rawd”). New York City English Mid-Atlantic English Accent Samples:

Logical Fallacies Speech Patterns NEW YORK — Psychopaths are known to be wily and manipulative, but even so, they unconsciously betray themselves, according to scientists who have looked for patterns in convicted murderers' speech as they described their crimes. The researchers interviewed 52 convicted murderers, 14 of them ranked as psychopaths according to the Psychopathy Checklist-Revised, a 20-item assessment, and asked them to describe their crimes in detail. Using computer programs to analyze what the men said, the researchers found that those with psychopathic scores showed a lack of emotion, spoke in terms of cause-and-effect when describing their crimes, and focused their attention on basic needs, such as food, drink and money. [10 Contested Death Penalty Cases] "The beautiful thing about them is they are unconsciously produced," Hancock said. These unconscious actions can reveal the psychological dynamics in a speaker's mind even though he or she is unaware of it, Hancock said. What it means to be a psychopath

25 Insights on Becoming a Better Writer When George Plimpton asked Ernest Hemingway what the best training for an aspiring writer would be in a 1954 interview, Hem replied, “Let’s say that he should go out and hang himself because he finds that writing well is impossibly difficult. Then he should be cut down without mercy and forced by his own self to write as well as he can for the rest of his life. At least he will have the story of the hanging to commence with.” Today, writing well is more important than ever. So what can we do to improve our writing short of hanging ourselves? 1. Don’t just plan to write—write. 2. [The] Resistance knows that the longer we noodle around “getting ready,” the more time and opportunity we’ll have to sabotage ourselves. 3. Find your best time of the day for writing and write. 4. Work on a computer that is disconnected from the internet. 5. Find a subject you care about and which you in your heart feel others should care about. 6. 7. Hone your outline and then cling to it as a lifeline. 8. 9.

Writing Thesauruses Academic Writing Guide APA, WRITING, EDITING, and PROOFREADING GUIDE Lee Bowman ELearningProf.net lbowmanprof@yahoo.com © 2006 updated August 2007 Please note that everything included in this guide will be graded in your paper. Take the time to proofread and edit your paper according to all the APA formatting and graduate level writing information included in this resource. PAPER FORMAT: All written papers must be formatted as follows: DO NOT: **type page headers or page numbers. Use the MS Word page header feature **hit enter to double space. Title page: Always use only Times New Roman 12 point font; no bold print. HOW TO WRITE A THESIS STATEMENT, INTRODUCTION, & CONCLUSION The thesis statement is part of the introduction and not a separate part of the paper. LEO Thesis Statements OWL: The "SO WHAT" Test UNC Handout Thesis Statements DO NOT ANNOUNCE the thesis of your paper with phrases such as “I will discuss……” or “This paper will…...” X: In this paper, I will discuss how ABC…….. MIT Online Writing Lab

Textual Analysis Photo by Murray Close/Lionsgate, Inc. This weekend, millions of preteens will flock to theaters to take in the Hunger Games sequel, Catching Fire, just as millions of preteens flocked to each of the five Twilight movies. For the most part, however, these will not be the same people. Of the tens of millions who identify themselves on Facebook as fans of either of the two series, less than 20 percent are fans of both. Why might a reader take a shine to one series and not the other? To answer this question, I could have read all of the books and offered my opinion on the authors’ respective styles. “Textual analysis” sounds complicated, but it’s actually quite simple—a better term for it might be “counting words.” Once the words have been counted, the most obvious question to ask is: Which words are used most frequently by each author? And below is a list of most common -ly adverbs by author. Like the distinctive word lists, these sentences suggest something about each author’s style. J.K.

How to Publish an Ebook, Step by Step Want to publish a book? You can either kill a bunch of trees, or get with the 2010s and publish it as an ebook. If you haven’t noticed already, ebooks are no longer a niche market. As of June 2011, ebook reader adoption had reportedly hit 25 percent in the United States, with the market growing at a phenomenal 169 percent year over year. Today, most new releases are being published in ebook format. An ebook can provide your small business a real competitive advantage by giving you instant credibility and visibility in the marketplace. Unfortunately, the ebook sales market is fragmented. As a budding publisher, you will need to prepare your book for at least those three platforms. I have a couple of ebooks on the market, but for the past few years they’ve been available only for Kindle. Prepare for E-Publishing Before you even create your Amazon or B&N account, here’s how to get ready for your career as an e-publisher. Start with the book: First, write a book.