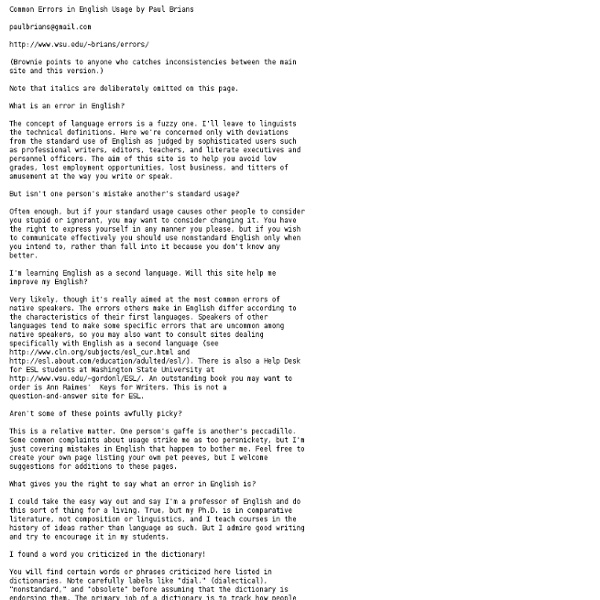 15 Common College Grammar and Spelling Mistakes As midterms approach, many students are preparing for their first essays of the semester. By college, you should be able to write an effective essay, but we often make the same grammatical and spelling mistakes over and over again. I have no doubt you can use two/too/to and there/they're/their correctly by now, but here are some more advanced common grammatical and spelling errors that make you look silly, both in your writing and speaking. Note: All of these definitions are my re-wordings of dictionaries and grammars. Then/Than: Although a common error in writing, this is a very grammar problem to solve.

Commonly misspelled English words Commonly misspelled English words[1] (UK: misspelt words) are words that are often unintentionally misspelled in general writing. A selected list of common words is presented below, under Documented list of common misspellings. Although the word "common" is subjective depending on the situation, the focus is on general writing, rather than in a specific field. Official spellings also vary by country or region, with some rejecting the American or British variants as incorrect for the region.[1][2][3] Within a particular field of study, such as computer graphics, other words might be more common for misspelling, such as "pixel" misspelled as "pixle" (or variants "cesium" and "caesium"). Sometimes words are purposely misspelled, as a form in slang, abbreviations, or in song lyrics, etc. Unlimited misspellings[edit] Documented list of common misspellings[edit] A–B[edit] C–D[edit] E–H[edit] I–K[edit] L–O[edit] P–Q[edit] R–S[edit] T–Z[edit] Common causes of those misspellings[edit] Mispronunciation[edit]

An Illustrated Book of Bad Arguments A reader recently wrote in asking if I could share a bit about the process of putting the book together and talk about how the project started. Certainly. I go on two solitary walks every day. It was on a day in October of last year when, during one of those quiet moments on that bench, I recalled my college years and how outspoken I happened to be during them, an observation only made interesting by the fact that I have since turned into the quietest of beings. A realization that coincided with that nostalgic whiff was that a sizable amount of the discourse nowadays continues to be plagued with bad reasoning. Hence, the idea that finally shook me into soberness was one that had been fermenting for a while. Once I had a draft version of the book ready, I sent it to one of my life-long idols, Marvin Minsky, co-founder of the MIT Artificial Intelligence Lab and author of The Society of Mind. The cover is inspired by one of my favorite games growing up: LucasArts' Monkey Island series.

Ambiguous Sentences I came across this headline in the Wall Street Journal: Republicans Grill IRS Chief Over Lost Emails This type of sentence has great possibilities because of its two different interpretations: Republicans harshly question the chief about the emailsRepublicans cook the chief using email as the fuel It’s a perfect tool to: demonstrate careful reading, showcase the need for editing, and encourage creativity and divergent thinking. Even More Meanings The ambiguous headline took me back to my college days, when a professor shared this sentence: I saw a man on a hill with a telescope. It seems like a simple statement, until you begin to unpack the many alternate meanings: There’s a man on a hill, and I’m watching him with my telescope. See how many meanings your students can catch! More Examples Here are some other ambiguous sentences (more at this wikipedia page): We saw her duck. He fed her cat food. Look at the dog with one eye. Include A Classic Challenging Parts of Speech Create Your Own

Why Your Job Cover Letter Sucks (and what you can do to fix it) For the next few months I will be posting the “best of the best” Professor is in blog posts on the job market, for the benefit of all those girding their loins for the 2013-2014 market. Today’s post was originally published in 2011. I’ve now read about two thousand more job letters than I mention here. All the advice still applies. In my 15 years as a faculty member I served on approximately 11 search committees. Estimating that each search brought in an average of 200 applications (a conservative estimate for a field like Anthropology, a generous estimate for a much smaller field like East Asian Languages and Literatures), that means I have read approximately 2200 job applications. That means I’ve read 2200 job cover letters. I’ve also read the cover letters of my own students, and a passel of Ph.D. students who came to me for advice, as well as a large number of clients since opening The Professor is In (as of July 2012 let’s say 600). What’s up with that? Here’s what’s up with that. 1.

mshesso:Grammar AA = Avoid Anthropomorphism Do not assign uniquely human qualities to inanimate objects. For instance, results do not think and the literature does not believe. Inanimate objects or concepts can perform actions, such as supporting theories, demonstrating effects, and so forth, but they cannot engage in strictly human activities such as thinking and believing. See Section 3.09 (Precision and Clarity - Attribution), p. 69 of the APA Publication Manual for further details. Return to the Table of Contents. AWO = Awkward Word Order Clear writing depends on a logical word order; placing words in an awkward order can obscure the meaning entirely or confuse the reader. , may have been used to suggest an alternative word order. The APA Publication Manual does not provide further details. BL = Biased Language It is very important to make sure that our language is unbiased and to avoid subtle forms of unintential bias. Describe at the appropriate level of specificity. Be sensitive to labels. See also S/H.

Advice for students so they don't sound silly in emails (essay) Dear College Student, If your professor has sent you a link to this page, two things are likely true. First, you probably sent an email that does not represent you in a way you would like to be represented. Second, while others might have scolded you, mocked you or despaired over the future of the planet because of your email, you sent it to someone who wants to help you represent yourself better. In part, because only a click or swipe or two separate emails from Facebook, Twitter, Instagram and texting, the lines between professional emails and more informal modes of writing have become blurred, and many students find the conventions of professional emails murky. In the age of social media, many students approach emailing similar to texting and other forms of digital communication, where the crucial conventions are brevity and informality. These different ways of writing are just that -- different ways of writing. 1. 2. 3. 4. 5. 6. With wishes for all the best emails in the future,