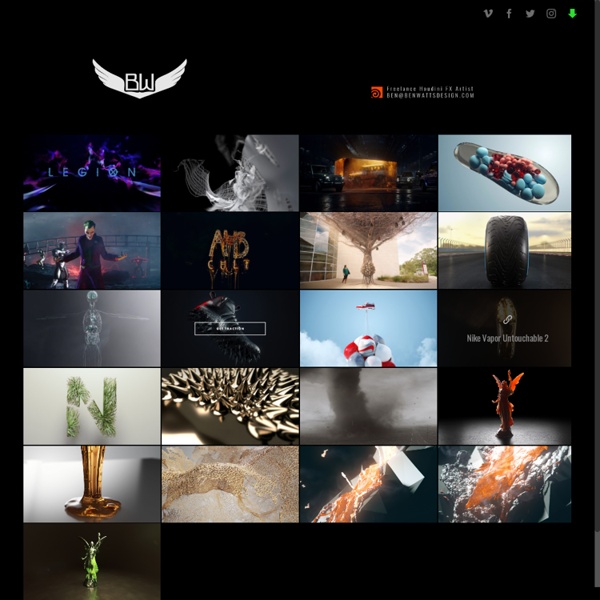 Houdini VOP raytracer part 2 Posted on August 15, 2013 Critical issue of image synthesis is to determine of the correct color of each pixel. One way of finding that color is to average colors of the light rays that strike that pixel. 22 Useful Tricks in After Effects You May Not Know About Liked this video ? Don't forget to rate [Total: 3 Average: 4.7/5] 22 Useful Tricks in After Effects Houdini Video Tutorials — Arthur Yidi Updated: January 15, 2015 First time learning? Start Here and here. Technical Repository A real quick lesson on Barycentric Coordinates. No diagrams right now. Maybe I’ll come back later and elaborate. I’m really going to gloss over the details here – just explain how to accomplish the task in a straightforward manner. So, you want to find the coordinates of a random point in space that exists on the surface of a predefined triangle. Sounds complicated, but it’s actually not that bad.

Cinema 4D HDR Lighting Fundamentals Tutorial Liked this video ? Don't forget to rate Cinema 4d HDR Lighting Fundamentals In this tutorial we will be looking at high dynamic range lighting or (HDR). – So looking at the process involved in the creation of a HDR image(Exposure bracketing, stitching) – Why it differs from a standard 8 bit image? – Its application within Cinema 4D and how a HDR works in conjunction with global illumination – Then discussing the relationship between specular/reflection with the standard materials in Cinema 4D – and how they relate to GI and HDR lighting. For more tutorials and tips checkout creativmotion Houdini Tutorials Updated on March 31 2016 RECENT (new users see Getting Started below) H15 Crowds!

Martin Sawtell's website Point Clouds Point clouds are one of those things in Houdini that can be confusing and unclear the first time you try to use them; people often throw the term about in many different contexts and the documentation doesn't make it clear what's going on either. So I figure I should write up some common workflows and how they might apply to the POPs context. First up is using the pcopen pop vop, and how it can pull arbitrary float or vector attributes off geometry. It's kind of like an attribute transfer sop or pop, but done within a pop vop context so you can link it directly in to whatever you are cooking up. The cool thing is that you can directly reference another sop that is cooked dynamically as per normal- no caching required! Aircraft concept art by Oscar Cafaro Airplane and helicopter concept art by one of our favorites... Oscar Cafaro. Check out Oscar's Monthly Header post.

Lesson 1: Introduction to Shaders in Houdini « Houdini Render Passes In Autodesk maya, you interact with shaders at a very high level. The inner workings of the shader is usually not directly accessible to the artist. Instead, you are given access to an organized variety of sliders that the artist would tweak to achieve specific looks. This is quite the opposite with Houdini. While working in Houdini, you will most likely need to understand the mechanics of the shader to get the most out of your workflow. Easy way to proportionally scale multiple objects in one go? A useful addition would be an option for resizing without altering the object's Scale values. I like to leave these alone unless animating the size of an object. Yep, but then it gets complicated. :) There are three options for this: scale, scale points (multiplying by a matrix), set parameters. For everything, scale works. For point objects (SplineObject, PointObject, or PolygonObject), scale and scale points works.

HoudiniVolumes - cgwiki Volumes are primitives Confused me slightly at first, so worth mentioning; A volume is a primitive, the same way that a point is a primitive, or a primitive sphere is a primitive. This means that unlike a polygon mesh for example, there's no drilling down to its sub-components; you can't open the geometry spreadsheet to see values in the individual voxels. There are other tools to help you see whats going on within a volume (volume slice sop, volume visualisation sop, volume trails sop etc), but ultimately, if you merge a 400x400x400 voxel volume with a primitive sphere, if you inspect the merge it will show that you have 2 primitives; a volume and a sphere. Houdini supports 2 volume types, its own volume format, and VDB. These are treated as primitives like polys or nurbs, if you middle click and hold on a node, you'll see it say '1 VDB' or '1 Volume' or similar.

CG Tutorial library: Houdini 9 Ways to Destroy Things in Blender [ #VFX #Blender ]Gleb Alexandrov shows us a video tutorial about 9 Ways to Destroy Things in Blender. Let's check it out!>> See Also: Download Blender addon More Blender tutorial Free HDRI CD collection from EVERMOTION Free HDRI CD collection from EVERMOTION EVERMOTION gives you an unique chance to download free collection of hdri maps, which you can burn on CD. It is non tested hdri maps done by Evermotion team. Taste and write what do you think about it on forum. Hurry up – put your friends on! Thank you evermotion