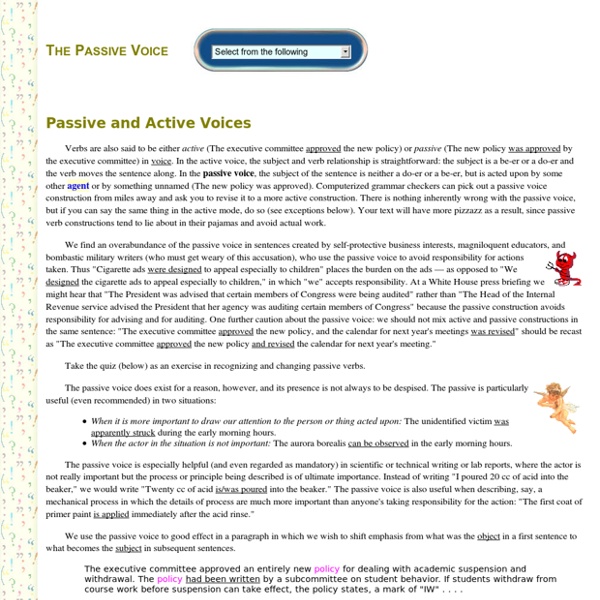 Passive and Active Voices Verbs are also said to be either active (The executive committee approved the new policy) or passive (The new policy was approved by the executive committee) in voice. In the active voice, the subject and verb relationship is straightforward: the subject is a be-er or a do-er and the verb moves the sentence along. In the passive voice, the subject of the sentence is neither a do-er or a be-er, but is acted upon by some other agent or by something unnamed (The new policy was approved). Computerized grammar checkers can pick out a passive voice construction from miles away and ask you to revise it to a more active construction. There is nothing inherently wrong with the passive voice, but if you can say the same thing in the active mode, do so (see exceptions below). use the passive voice to avoid responsibility for actions taken. Take the quiz (below) as an exercise in recognizing and changing passive verbs. Passive Verb Formation Verbals in Passive Structures Related:  Voice • Gramática • Escritura

Common Grammar Mistakes I’ve edited a monthly magazine for more than six years, and it’s a job that’s come with more frustration than reward. If there’s one thing I am grateful for — and it sure isn’t the pay — it’s that my work has allowed endless time to hone my craft to Louis Skolnick levels of grammar geekery. As someone who slings red ink for a living, let me tell you: grammar is an ultra-micro component in the larger picture; it lies somewhere in the final steps of the editing trail; and as such it’s an overrated quasi-irrelevancy in the creative process, perpetuated into importance primarily by bitter nerds who accumulate tweed jackets and crippling inferiority complexes. But experience has also taught me that readers, for better or worse, will approach your work with a jaundiced eye and an itch to judge. Who and Whom This one opens a big can of worms. Which and That This is one of the most common mistakes out there, and understandably so. Lay and Lie This is the crown jewel of all grammatical errors. Moot

HyperGrammar | The Writing Center Welcome to HyperGrammar electronic grammar course at the University of Ottawa's Writing Centre. This course covers approximately the same ground as our English department's ENG 1320 Grammar course. The content of HyperGrammar is the result of the collaborative work of the four instructors who were teaching the course in Fall 1993: Heather MacFadyen, David Megginson, Frances Peck, and Dorothy Turner. This package is designed to allow users a great deal of freedom and creativity as they read about grammar. This package is currently under construction! Please read the Copyright and Terms of Use before you begin using HyperGrammar, and note that we provide NO WARRANTY of the accuracy or fitness for use of the information in this package. * This site uses the Oxford dictionary spelling. We do not offer any writing help by e-mail. No permission is required to link to this site. Written by David Megginson (editor)

Clear, Concise Sentences: Use the active voice At the heart of every good sentence is a strong, precise verb; the converse is true as well--at the core of most confusing, awkward, or wordy sentences lies a weak verb. Try to use the active voice whenever possible. Active vs. passive voice In a sentence written in the active voice, the subject of sentence performs the action. Active: The candidate believes that Congress must place a ceiling on the budget. Passive: It is believed by the candidate that a ceiling must be placed on the budget by Congress. Active: Researchers earlier showed that high stress can cause heart attacks. Passive: It was earlier demonstrated that heart attacks can be caused by high stress. Active: The dog bit the man. Passive: The man was bitten by the dog. Converting sentences to active voice Here are some tips and strategies for converting sentences from the passive to the active voice. Look for a "by" phrase (e.g., "by the dog" in the last example above). When to use passive voice To be tactful by not naming the actor

Strong Authorial Voice By Nicholas So you've got a great novel in the works. It's got everything your audience could ask for - orcs and goblins, champions and villains, flashy adventures and passionate romance. Now the question is not what to write but how to write it; now comes the question of voice. Voice, like personality, is a nebulous term, and it has as many facets. I would like to first dispel a few myths concerning voice, or, as it is sometimes referred to, style. So let's talk voice. The universals of strong writing Every artist wants to be unique. Clarity is above all the hallmark of good writing. I believe this difficulty, which verse, by nature and origin emotional, encounters in dealing with ordinary unemotional narrative, to lie as a technical reason at the bottom of Horace's advice to the writer of Epic to plunge in media res, thus avoiding flat preparative and catching at once a high wind which shall carry him hereafter across dull levels and intervals. Passive Voice: The mirror was shattered.

Word classes To discuss accuracy and style at the sentence level, we need to be able refer to the different word classes, or parts of speech (verb, noun, adjective, adverb, linker/ conjunction, etc.) we use in sentences. nouns give names to ideas, people, objects and actions verbs give meanings to sentences by telling us what things do, or what they are adjectives describe ideas, people, objects and actions, in other words, nouns and pronouns adverbs describe verbs and adjectives determiners (including articles) tell us which noun is being referred to prepositions show the relationship between nouns and other parts of the sentence linkers (or conjunctions) join similar parts of speech or whole clauses Questions about word classes Sometimes words have more than one meaning and fit into more than one category. Question about words which are in more than one class

EL MANDARIN : Enlaces para aprender mandarín 1. Diccionario etimológico: 2. 3. 4. Voice:  Active and Passive Active voice In most English sentences with an action verb, the subject performs the action denoted by the verb. These examples show that the subject is doing the verb's action. Because the subject does or "acts upon" the verb in such sentences, the sentences are said to be in the active voice. Passive voice One can change the normal word order of many active sentences (those with a direct object) so that the subject is no longer active, but is, instead, being acted upon by the verb - or passive. Note in these examples how the subject-verb relationship has changed. Because the subject is being "acted upon" (or is passive), such sentences are said to be in the passive voice. NOTE: Colorful parrots live in the rainforests cannot be changed to passive voice because the sentence does not have a direct object. To change a sentence from active to passive voice, do the following: 1. 2. 3. It is generally preferable to use the ACTIVE voice. 1. 2. 3. Examples

Dialect Hugo Chávez, Venezuelan President, Dies Carlos Garcia Rawlins/Reuters Venezuelans in Caracas after President Hugo Chávez’s death was announced. He had been out of public view since December. Close to tears and his voice cracking, Vice President Nicolás Maduro said he and other officials had gone to the military hospital where Mr. In short order, police officers and soldiers were highly visible as people ran through the streets, calling loved ones on cellphones, rushing to get home. As darkness fell, somber crowds congregated in the main square of Caracas and at the military hospital, with men and women crying openly in sadness and fear about what would come next. In one neighborhood, Chávez supporters set fire to tents and mattresses used by university students who had chained themselves together in protest several days earlier to demand more information about Mr. “Are you happy now?” Mr. Mr. The Constitution says that, since Mr. But in light of Mr. Taking a page out of Mr.