Do All Your Characters Talk The Same? 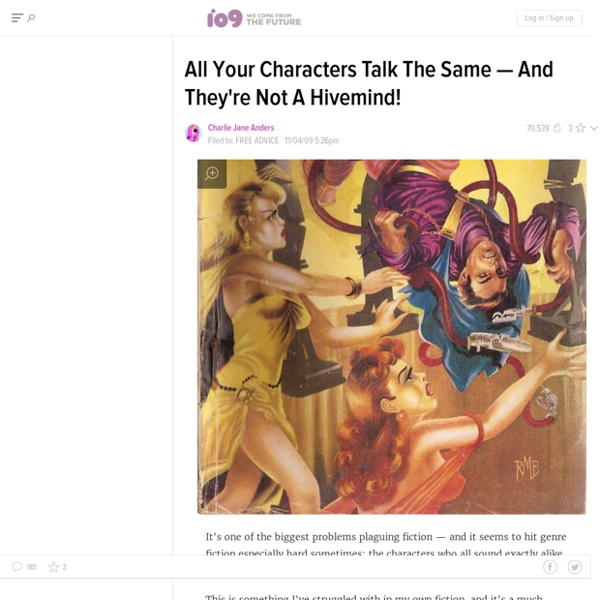 If you want a good idea of how to not write characters, go read Robert Heinlein's Number of the Beast. I actually like most Heinlein I've read, but I'm pretty convinced that all of his later books are just horrid. In Number of the Beast, the most positive thing I've seen Heinlein apologists write about the book is that perhaps it was utterly terrible on purpose, as a way of teaching people how to write well. I guess that's possible, but I'm hesitant to believe it, when I don't think Heinlein ever said as much on the record. It seems more likely that it's just bad, but just random enough that if you really squint, you could choose to see an elaborate scheme that justifies how terrible the book is. I just don't buy it. To get to the point, allow me to relate the characters to you: Robert Heinlein and of course OK, technically in the book, they are a guy in his late 20s, a woman in her early 20s, an older male professor, and an older female socialite, but they all have the same voice.

Perception and Language Storytelling is a buzzword with lots of different interpretations. Either the internet is killing stories, or it’s the best thing to happen to them since the printing press. Article Continues Below Stories have been around as long as we have, helping us understand our world and ourselves. We learn and retain information best through stories, because they turn information into more than the sum of its parts. But what makes a story a story, and what does it mean for the digital world we’ve built?” Medieval Names Archive This collection of articles on medieval and Renaissance names is intended to help historical re-creators to choose authentic names. These articles were gathered from various places, and some of them appear elsewhere. In all cases, the copyright on each article belongs to its authors.

Second Person Point of View — The Writer’s Craft Enrollment Limited Sherry Wilson's step-by-step method helped me organize my thoughts and transform a simple idea into a full-fledged plot. Without her help and guidance, I'd still be walking around with just another "great idea for a story." Character Chart for Fiction Writers - EpiGuide.com If you're a fiction writer -- whether you're working on a novel, short story, screenplay, television series, play, web series, webserial, or blog-based fiction -- your characters should come alive for your reader or audience. The highly detailed chart below will help writers develop fictional characters who are believable, captivating, and unique. Print this page to complete the form for each main character you create.

Words Shakespeare Invented Words Shakespeare Invented The English language owes a great debt to Shakespeare. He invented over 1700 of our common words by changing nouns into verbs, changing verbs into adjectives, connecting words never before used together, adding prefixes and suffixes, and devising words wholly original. Below is a list of a few of the words Shakespeare coined or adapted, hyperlinked to the play and scene from which it comes. Interviewing Characters: Follow the Energy - Conversations with Dale On November 13, 2007 I ran out of plot for the NaNoWriMo novel I was writing. I had no idea what to write next. That’s not uncommon for NaNo novelists, but I hadda do something to jiggle myself loose. In NaNoWriMo, word count is everything, and I couldn’t afford to fall behind.

TAKING A CHANCE ON PATHOS By EVA HOFFMAN; Eva Hoffman is an editor of The Book Review. Her memoir ''Lost in Translation,'' about living in a new culture and language, will be published in January.Published: November 6, 1988 SELECTED STORIES By Andre Dubus. 476 pp. Boston: David R. Godine. $22.50. Emotional veracity is surely one of the most elusive elements in fiction. Character Chart FAVORITES Color: Music: Food: Literature: Expressions: Book: Quote: Expletive(s) (swears): Mode of transportation: HABITS Smokes: What? How often? Speech Patterns NEW YORK — Psychopaths are known to be wily and manipulative, but even so, they unconsciously betray themselves, according to scientists who have looked for patterns in convicted murderers' speech as they described their crimes. The researchers interviewed 52 convicted murderers, 14 of them ranked as psychopaths according to the Psychopathy Checklist-Revised, a 20-item assessment, and asked them to describe their crimes in detail. Using computer programs to analyze what the men said, the researchers found that those with psychopathic scores showed a lack of emotion, spoke in terms of cause-and-effect when describing their crimes, and focused their attention on basic needs, such as food, drink and money. [10 Contested Death Penalty Cases] "The beautiful thing about them is they are unconsciously produced," Hancock said. These unconscious actions can reveal the psychological dynamics in a speaker's mind even though he or she is unaware of it, Hancock said.