Interruptable Dialog System in Wwise. How Video Game Voice-Overs Are Produced. Periodically I receive unsolicited resumes from people who are looking for work in video games. 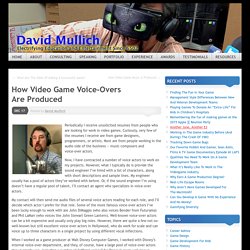 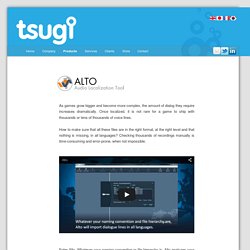 Once localized, it is not rare for a game to ship with thousands or tens of thousands of voice lines. How to make sure that all these files are in the right format, at the right level and that nothing is missing, in all languages? Checking thousands of recordings manually is time-consuming and error-prone, when not impossible. Enter Alto. Whatever your naming convention or file hierarchy is, Alto analyzes your localized dialog files and compares them with the reference language, reporting any mistake. Not only does Alto check for missing or misnamed files, but it will also make sure that the audio format of each file is correct (sample rate, bit depth, number of channels), compare the average and peak loudness, the duration, leading or trailing silence of the files, and even the timbre of the voices! 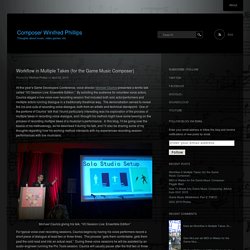 By soliciting the audience for volunteer voice actors, Csurics staged a live voice-over recording session that included both solo actor/performers and multiple actors running dialogue in a traditionally theatrical way. The demonstration served to reveal the ins-and-outs of recording voice dialogue, both from an artistic and technical standpoint. One of the portions of Csurics’ talk that I found particularly interesting was his exploration of the process of multiple takes in recording voice dialogue, and I thought his method might have some bearing on the process of recording multiple takes of a musician’s performance. 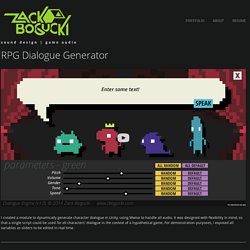 To do this, I determined which basic phonemes were most vital for recognizable English speech, and recorded them. The engine then manipulates these phonemes in real time and plays them back in quick succession, creating the illusion of speech. Defining Unique Characters. YouTube - Little Big Planet Voice. Tsugi. Voice actor hiring cheat sheet. Watch: Troy Baker on what it's like to voice Batman and the Joker. Meet the man behind the voice—or, that is, voices—of some of the biggest characters in video games and animation: Troy Baker. 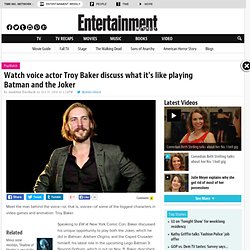 Speaking to EW at New York Comic Con, Baker discussed his unique opportunity to play both the Joker, which he did in Batman: Arkham Origins, and the Caped Crusader himself, his latest role in the upcoming Lego Batman 3: Beyond Gotham, which is out on Nov. 11. Casting the Single-Player Movie Star. The devious Francis Underwood is playing video games again. 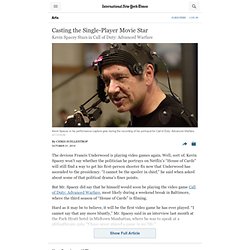 Well, sort of. Kevin Spacey won’t say whether the politician he portrays on Netflix’s “House of Cards” will still find a way to get his first-person shooter fix now that Underwood has ascended to the presidency. “I cannot be the spoiler in chief,” he said when asked about some of that political drama’s finer points. But Mr. Inside a video game voiceover studio. Indie Advice: How to get Brillo Game Voice Overs - Size Five Games. There’s something about VoiceOver that really lifts a project. 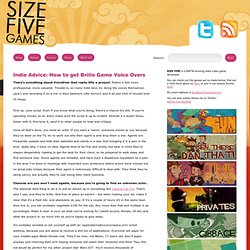 Makes it feel more professional, more valuable. Trouble is, so many indie devs try doing the voices themselves (ack!) The Art of Voiceover with Brian Bloom and Claudia Black. GVACpodcast 2012-12 Sept 25 by Game Audio Network Guild. Video Game Localization. Article by George Spanos Video game localization is the process whereby a game's primary language is translated into other languages in order to accommodate foreign speaking gamers. 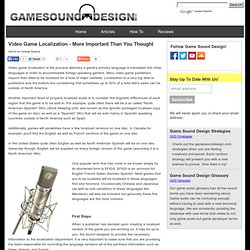 Many video game publishers require their titles to be localized for a host of major markets. Localization is a very big deal to publishers and the bottom line considering that sometimes up to 50% of a AAA title's sales can be outside of North America. The best and worst video game performances of 2013. Check here for more from GamesBeat’s 12 Days of the Best and Worst of 2013 It’s no coincidence that many of the best performances this year came from games that are also fighting for Game of the Year awards all across the web. 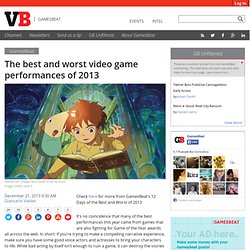 In short: If you’re trying to make a compelling narrative experience, make sure you have some good voice actors and actresses to bring your characters to life. While bad acting by itself isn’t enough to ruin a game, it can destroy the stories that developers work so hard to build. 3 Essential Steps to Launch Your Voice Over Career. Interview With Fryda Wolff. Talented Voice Actress Fryda Wolff gives us a great insight on on sound design, the gaming industry and voice acting. 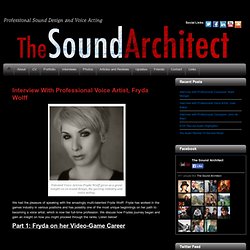 We had the pleasure of speaking with the amazingly multi-talented Fryda Wolff. Fryda has worked in the games industry in various positions and has possibly one of the most unique beginnings on her path to becoming a voice artist, which is now her full-time profession. We discuss how Frydas journey began and gain an insight on how you might proceed through the ranks. Listen below! Creating Sustainable Characters - Voiceover Universe. Vocal placement is the bane of most character voice performer’s existence! It is profoundly rewarding to capture a unique sound vocally and equally disturbing when the placement wanders and morphs into another texture or is lost completely. The voice performer can adapt the instrument through compressions and aspirations, textures and structural props, creating absolute vocal magic.

However, maintaining these character choices shatter the nerves of even the most seasoned professional. For some it is like cupping water in their hands, so refreshing and yet frustrating as it seeps through your fingers...the prayer gone. Veteran ADR Mixer Doc Kane of Walt Disney Studios. Synopsis What has three letters, many aliases and is of major significance to the sound community? You guessed it: ADR aka Automated Dialog Replacement aka Additional Dialog Recording aka Dubbing aka Looping. All of these monikers are understood as the process of re-recording dialog that cannot be salvaged from a production. To make one thing clear, there is nothing automated about it. ADR is an art. Dehumaniser. Interstellar Marines: Presentation GDC 2008 (Official) Getting JRPGs Out In English Is Harder Than You Think. Wow! Ryusui. I really like your translation of Breath of Fire II. Just thought I'd say it since I saw you here. Thanks for all your hard work.

Thanks. That said, I did make some much-needed improvements on the programming end. I also take pride in recognizing "Leukocyte" among the monster names (although I probably should have renamed it "Erythrocyte," given it's actually red) and the fact that the "inside the Queen's body" dungeon was modeled after a human heart (I tried to avoid abbreviations whenever possible, but I absolutely had to fit in "L. Sounding Real: Directing VO for Games. Posted by Shaun Farley on Monday, September 9, 2013 · 5 Comments Guest Contribution by DB Cooper For our collaboration month, some tips from a voice actor…on working with voice actors. Actors are, for the most part, eager to please. And they know that games need to be recorded fast— there’s so much script and so little time.

Actors are keen to help get the work done quickly, and often approach lines of script as elements that need to be rendered whole. Shogun Gamer: Video Game News Community: Interviews, News, Reviews and Forum. With the technological advances made over the last few years we’ve seen an influx of notable acting talent make the jump from the worlds of film & TV to that of the video game industry. It’s not necessarily a surprise to see a familiar actor appear in a game, or at the very least hear their voice, though it does often mean one thing: a quality performance. Such a thing certainly rings true of veteran actor Carlo Rota. After appearing in films such as “The Boondock Saints” and the hit TV show “24”, in which he played CTU analyst Morris O'Brian, Carlo has made the leap to video games with Splinter Cell: Blacklist. 50 Worst Video Game Voice Acting Lines. Diablo 3: Finding a voice. Bill Farmer, The Voice of Disney's Goofy, Talks about "A Career in Voiceover"

Mark Estdale's Blog - Voice Casting for Video Games - Part 1: Follow The Brief. LittleBigPlanet Gibberish Overview. Madden NFL 13 Official Behind The Scenes Audio Interview. Using Max/MSP To Build a Fictional Language Dialogue System. Guest post by Naila Burney. A major challenge in video games is to record and manage thousands of dialogue lines. In Mass Effect 3, for example, forty thousand lines were recorded, and in Saints Row: The Third, eighty thousand lines were needed. Using Max/MSP To Build a Fictional Language Dialogue System. Atlus Had Trouble Finding A Suitable Voice For Persona 4: Golden's Marie. Voice Processing – Cuts. The secret to a great sounding dialog or vocal mix is a good recording: plosive free, without mouth noise, sans funky contributions from the room, and lacking sibilance. I suppose an inspired, well performed recording helps a little too. For Our Consideration. I love the characters of Persona 4 because they are so wonderfully human. Yukiko, a young heiress, troubled like any other teenager, burdened by the family business she’ll inherit and her maintenance of a proper, well-studied schoolroom identity.

Text-to-Speech Voices. Why Video Game Characters Say Such Ridiculous Things. Portal 2 Best of GLaDOS. The Growth of Voice Acting in Video Games. The Voice Over Story behind Battlefield – An Interview With Tomas Danko.