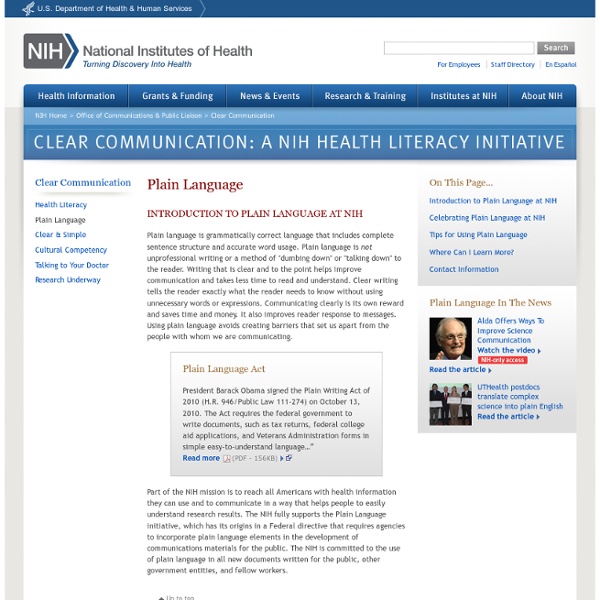 Introduction to Plain Language at NIH Plain language is grammatically correct language that includes complete sentence structure and accurate word usage. Plain language is not unprofessional writing or a method of "dumbing down" or "talking down" to the reader. Writing that is clear and to the point helps improve communication and takes less time to read and understand. Clear writing tells the reader exactly what the reader needs to know without using unnecessary words or expressions. Plain Language Act President Barack Obama signed the Plain Writing Act of 2010 (H.R. 946/Public Law 111-274) on October 13, 2010. Part of the NIH mission is to reach all Americans with health information they can use and to communicate in a way that helps people to easily understand research results. Celebrating Plain Language at NIH Plain Language/Clear Communications Awards Program Tips for Using Plain Language: Certain qualities characterize plain language. 1. 3. Organization. 4. Where Can I Learn More? Related:  Language • Writān

Accents and Dialects Public Domain / CIA NOTE: This guide uses the International Phonetic Alphabet (IPA). For information about this notation, please visit my page of International Phonetic Alphabet Resources. There are obviously many North American accents. General American This refers to the spectrum of ‘standard’ English spoken by newscasters, TV actors, and a large percentage of middle-class Americans. Prominent Features: The short-a (as in cat) is raised and diphthongized before nasal consonants. Accent Samples: Eastern New England English This describes the classic “Boston Accent.” Non-rhoticity, as mentioned above.Fronted pronunciation of words like father and palm, so these are pronounced IPA faðə and pa:m (i.e. this vowel is close to the vowel in words like “cat” and “mad” in General American).Unlike most other American accents, the vowel in lot and rod is rounded as in most British dialects, pronounced IPA lɒt and ɹɒd (“lawt” and “rawd”). New York City English Mid-Atlantic English Accent Samples:

How We Speak Reveals What We Think, with Steven Pinker Transcript My name is Steve Pinker, and I’m Professor of Psychology at Harvard University. And today I’m going to speak to you about language. ﻿I’m actually not a linguist, but a cognitive scientist. I’m not so much interested as language as an object in its own right, but as a window to the human mind. Language is one of the fundamental topics in the human sciences. Language comes so naturally to us that we’re apt to forget what a strange and miraculous gift it is. Now, the ideas we are going to share are about this talent, language, but with a slightly different sequence of hisses and squeaks, I could cause you to be thinking thoughts about a vast array of topics, anything from the latest developments in your favorite reality show to theories of the origin of the universe. The Science of Language Not surprisingly, language is central to human life. Components of Linguistics What is Language? ﻿ A second thing not to confuse language with is proper grammar. Evidence Language is Not Thought

FAQ - PressThink (Originally published April 29, 2004) If you’re the kind of person who loves to complain about “meta” posts and make fun of blogging about blogging, please. Don’t read this post. You’ll hate it. It’s the echo chamber again. Q & A about how I do my blog, PressThink. … other writers trying to do a decent weblog who wish to compare and contrast, plus curious readers of PressThink, students in a Net journalism class, maybe. Some of these questions are asked frequently by readers or seen in comments. Why are PressThink posts so long? When I started asking around about how to do a weblog, I got many kinds of answers. So you decided to be contrarian and go the other way? No, contrarians are annoying. “People don’t have time for…” reasoning was meaningless to me, and I didn’t trust it. But it’s more like: this is my magazine, PressThink… If you like it, return. Fine, but weren’t your advisors just making a simple point about the nature of the Web medium? Sure, and I thanked them. Summer 2016.

This is What Michael Jackson Sounds Like in Quechua Even the youngs think Quechua is cool. After the language was translated for a book, a song, and given a shoutout by a fútbolero, we started thinking that Quechua was having a sort of moment. Perhaps the biggest sign of this is that a 14-year-old girl named Renata Flores sang a Quechua version of Michael Jackson’s “The Way You Make Me Feel.” How speaking multiple languages benefits the brain - Mia Nacamulli Amazed by what you have learned about having a bilingual brain? Then, start learning another language now! This website has tons of free lessons, games and quizzes to get you started! Pick one language or even two languages and get that gray matter growing. Speaking more than one language is like exercise for the brain? Love all this brain talk? Want to learn another language (or two or three or...)?

Concrete poetry George Herbert's "Easter Wings", printed in 1633 on two facing pages (one stanza per page), sideways, so that the lines would call to mind birds flying up with outstretched wings. Concrete or shape poetry is poetry in which the typographical arrangement of words is as important in conveying the intended effect as the conventional elements of the poem, such as meaning of words, rhythm, rhyme and so on. It is sometimes referred to as visual poetry, a term that has evolved to have distinct meaning of its own, but which shares the distinction of being poetry in which the visual elements are as important as the text. Development[edit] Concrete poetry begins by assuming a total responsibility before language: accepting the premise of the historical idiom as the indispensable nucleus of communication, it refuses to absorb words as mere indifferent vehicles, without life, without personality without history — taboo-tombs in which convention insists on burying the idea. See also[edit] Walker, John.

How language can affect the way we think Keith Chen (TED Talk: Could your language affect your ability to save money?) might be an economist, but he wants to talk about language. For instance, he points out, in Chinese, saying “this is my uncle” is not as straightforward as you might think. In Chinese, you have no choice but to encode more information about said uncle. “All of this information is obligatory. This got Chen wondering: Is there a connection between language and how we think and behave? While “futured languages,” like English, distinguish between the past, present and future, “futureless languages” like Chinese use the same phrasing to describe the events of yesterday, today and tomorrow. But that’s only the beginning. Featured illustration via iStock.

| Strictly Spam Category Winner STRICTLY SPAM 2000 WINNER: David A. Winston, New York, N.Y. Brazen Teen Bitches, Take a serious look at your life. And allow me to introduce a powerful new substance from the Electri-Cellular Industry. I wouldn't have believed it myself, But now there is a better way. It's true you can earn $50,000 in the next 90 days You really can find out ANYTHING ABOUT ANYONE! What does it do? And that, my friend, is the bargain of a lifetime. I am faxing a check

Mapping Metaphor: Home Quote Investigator | Dedicated to tracing quotations justenglish Paul V. Hartman (The Capitalized syllable gets the emphasis) alacrity a-LACK-ra-tee cheerful willingness and promptnessanathema a-NATH-a-ma a thing or person cursed, banned, or reviledanodyne AN-a-dine not likely to cause offence or disagreement and somewhat dull//anything that sooths or comfortsaphorism AFF-oar-ism a short, witty saying or concise principleapostate ah-POSS-tate (also: apostasy) person who has left the fold or deserted the faith.arrogate ARROW-gate to make an unreasonable claimatavistic at-a-VIS-tic reverting to a primitive typeavuncular a-VUNC-you-lar “like an uncle”; benevolent bathos BATH-ose an anticlimaxbereft ba-REFT to be deprived of something valuable “He was bereft of reason.” cynosure SIGH-na-shore (from the Greek: “dog’s tail”) center of attention; point to which all eyes are drawn. dilettante DILL-ah-tent 1. having superficial/amateurish interest in a branch of knowledge; 2. a connoisseur or lover of the fine arts Click to read: Like this: Related