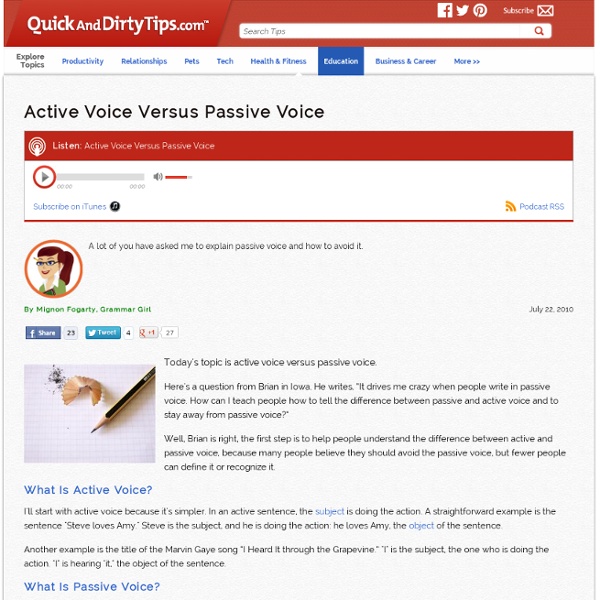 Today's topic is active voice versus passive voice. Here's a question from Brian in Iowa. He writes, “It drives me crazy when people write in passive voice. How can I teach people how to tell the difference between passive and active voice and to stay away from passive voice?” Well, Brian is right, the first step is to help people understand the difference between active and passive voice, because many people believe they should avoid the passive voice, but fewer people can define it or recognize it. What Is Active Voice? I'll start with active voice because it's simpler. Another example is the title of the Marvin Gaye song “I Heard It through the Grapevine.” What Is Passive Voice? In passive voice, the target of the action gets promoted to the subject position. If you wanted to make the title of the Marvin Gaye song passive, you would say “It was heard by me through the grapevine,” not such a catchy title anymore. Next: Is "To Be" a Sign of Passive Voice? Is Passive Voice Always Wrong? 1. Related:  Academic Writing Sources & Support • Pancho & MIRA • dsa1

5 Ways to Get Rid of Your Damn Empty Modifiers I discussed the need to get rid of empty emphatics when I gave you 8 words to seek and destroy in your writing, but just saying that you should get rid of a thing doesn't say much about the right way to do so. Today I'm going to show you a few of my favorite ways to get rid of your empty modifiers. What exactly is an empty modifier? It's any word whose only role is to intensify the word it's modifying. The prime candidates here are "very" and "really," but "extremely," "intensely," "totally," "absolutely," "quite," and many other emphatic modifiers make the list. I'm not saying that empty modifiers should never be used. 1. Sylvia was very crazy. This is the easiest and often the best solution. (Though, these days, you may need to use something a bit more extreme to earn the cut; I offer "mother-fucking" for your consideration.) 2. Bob was really ugly hideous. When I started dating my second serious girlfriend, we quickly fell in like. 3. Shane was really tall. 4. 5.

Short Story Shortcuts: 4 Techniques For Making A Big Impact In Few Words To successfully write short fiction, you need to make a big impact in as few words as possible. So every choice you make as an author needs to be deliberate, every character needs to act with purpose, and every word needs to pack a punch. When less is definitely more, focusing on certain details can help imbue your short story with lots of color, meaning, and subtext—without superfluous words. Four Small Ways To Pack Big Meaning Into Short Stories 1. 2. 3. 4. How Can You Implement These Techniques In Your Writing? To understand how well these techniques work, read some short fiction! As an exercise, give yourself a short word limit and try to tell your story. Check out these articles for more about keeping short stories short: 5 Ways To Shorten Your Short Stories 5 Surprising Short Story Mistakes QUESTION: What tricks do you use to make an impact in few words?

Nuts and Bolts: “Thought” Verbs In six seconds, you’ll hate me. But in six months, you’ll be a better writer. From this point forward – at least for the next half year – you may not use “thought” verbs. These include: Thinks, Knows, Understands, Realizes, Believes, Wants, Remembers, Imagines, Desires, and a hundred others you love to use. The list should also include: Loves and Hates. And it should include: Is and Has, but we’ll get to those, later. Until some time around Christmas, you can’t write: Kenny wondered if Monica didn’t like him going out at night…” Thinking is abstract. Instead, you’ll have to Un-pack that to something like: “The mornings after Kenny had stayed out, beyond the last bus, until he’d had to bum a ride or pay for a cab and got home to find Monica faking sleep, faking because she never slept that quiet, those mornings, she’d only put her own cup of coffee in the microwave. Instead of characters knowing anything, you must now present the details that allow the reader to know them. For example: Versus:

Free English Grammar Lessons and Tests Setting: Using Scene To Enrich Your Writing In both fiction and nonfiction, the setting is the general background against which your story takes place—the physical location and time period, both of which influence your characters and plot. So how can a creative writer use setting and scenery to further offset, augment, or reflect the action of the plot? Although we’re going to be exploring this issue in terms of fiction, these techniques work for nonfiction as well. These craft techniques work in all genres: poetry, stories, personal essays, memoir, and books. Suppose you’re writing a novel that is set in the Deep South in 1955 and your protagonist is an immigrant facing prejudice and roadblocks at every turn. Setting the stage for a short story or novel is a crucial part of engaging your reader. 1. 2. 3. 4. 5. 6. These are just a few of the ways an author can use the setting of a story to enhance the characters, plot, and theme of a short story or novel. QUESTION: What was the setting of the last thing you wrote?

Writing Empathetically/Sympathetically/Sentimentally Several weeks ago, I read a story that had a passage like this: "My parents never really cared about me," Allie said. "All my life they saw me as a disappointment, a waste of space. And it went on like this for about a paragraph or two. I could see that the writer wanted to foster sympathy for the character, wanted to explain how the character felt about her upbringing. But ultimately, it made her sound whiny--and I could tell that wasn't what the author intended. At first I was a little sympathetic to the character. . .then after several sentences, the writing just felt sentimental to me, meaning, I felt like the writer was trying to coax me to feel a certain way, like I was being controlled, rather than letting me feel for the situation myself. It's a good idea to want your readers to connect with your characters' hardships, but it can backfire if it's too sentimental or sometimes even when it's sympathetic. Instead, when you want to impact the reader, strive to create empathy. Remember,

Assonance Examples Many examples of assonance can be found in prose and poetry. Assonance is the repetition of vowel sounds in nearby words. It is used to reinforce the meanings of words or to set the mood. Setting the Mood with Assonance In this example by Carl Sandburg, in Early Moon, the long “o” sounds old or mysterious. “Poetry is old, ancient, goes back far. Assonance examples are sometimes hard to find, because they work subconsciously sometimes, and are subtle. Notice how the mood is set by using the long “A” in this excerpt from Cormac McCarthy's book, Outer Dark: “And stepping softly with her air of blooded ruin about the glade in a frail agony of grace she trailed her rags through dust and ashes, circling the dead fire, the charred billets and chalk bones, the little calcined ribcage.” The words "glade," "frail," "grace," and "trailed" help set the chilling mood of the work, and it is repeated and emphasized at the end with “ribcage.” Here are a few short assonance examples: Other Literary Devices

Citing Yourself - Citations - Academic Guides at Center for Student Success If you cite or quote your previous work, treat yourself as the author and your own previous course work as an unpublished paper, as shown in the APA publication manual. For example, if Marie Briggs wanted to cite a paper she wrote at Walden in 2012, her in-text citation might look like this: Briggs (2012) asserted that previous literature on the psychology of tightrope walkers was faulty in that it "presumed that risk-taking behaviors align neatly with certain personality traits or disorders" (p. 4). And in the reference list: Briggs, M. (2012). An analysis of personality theory. If your original work contained citations from other sources, you will need to include those same citations in the new work as well, per APA. According to Briggs (2012), recent psychologists such as "Presley and Johnson (2009) too quickly attributed risk-taking to genetic factors, ignoring the social family issues that often influence the decision to explore pursuits such as tightrope walking" (p. 5).

Short Stories: 10 Tips for Creative Writers Perception and Language Storytelling is a buzzword with lots of different interpretations. Either the internet is killing stories, or it’s the best thing to happen to them since the printing press. Article Continues Below Stories have been around as long as we have, helping us understand our world and ourselves. What Dickens knew#section1 Charles Dickens should be the mutton-chopped mascot of the web. There are few writers working today as open to public comment—as skilled at manipulating public sentiment, and as concerned with the advancement of his medium—as Dickens was for his time. In the last chapter of each installment, his sentences grew shorter, more active, and more visual. the empty dog-kennel was filled up with a great dog—deep mouthed and black-haired like Him, and he was very angry at the sight of me, and sprang out to get at me. “¨You hear the dynamism of the words, and feel the suspense of the moment: Dickens was an early master of the call to action. Inference: You infer, I imply#section3