How to Punctuate Dialogue 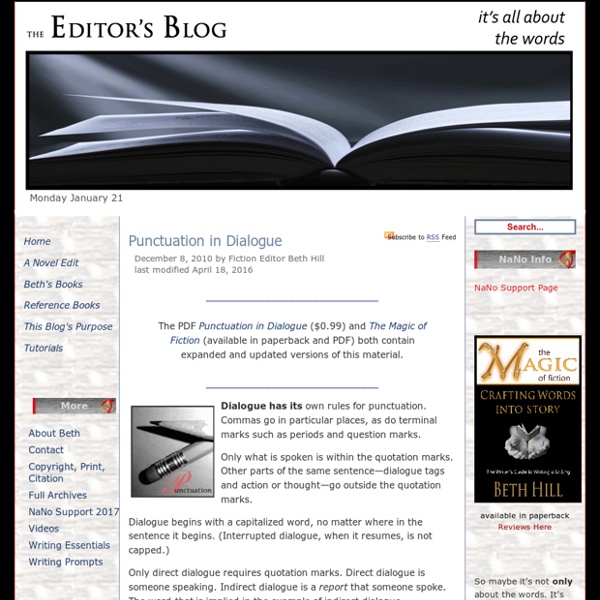 December 8, 2010 by Fiction Editor Beth Hill last modified April 18, 2016 The PDF Punctuation in Dialogue ($0.99) and The Magic of Fiction (available in paperback and PDF) both contain expanded and updated versions of this material. Dialogue h as its own rules for punctuation. Only what is spoken is within the quotation marks. Dialogue begins with a capitalized word, no matter where in the sentence it begins. Only direct dialogue requires quotation marks. Direct: “She was a bore,” he said.Indirect: He said [that] she was a bore. Here are some of the rules, with examples. Single line of dialogue, no dialogue tagThe entire sentence, including the period (or question mark or exclamation point) is within the quotation marks. “He loved you.” Single line with dialogue tag (attribution) following The dialogue is enclosed in quotation marks. Because the dialogue tag—she said—is part of the same sentence, it is not capped. “He loved you,” she said. She said, “He loved you.” “He loved you?” “He loved y—“ Related:  Writing

How to Punctuate Dialogue Correctly in Fiction Updated November 19, 2017 Nothing marks a beginning fiction writer faster than improperly punctuated dialogue. Because most academic papers do not use dialogue, many students don't learn the proper dialogue punctuation and grammar until taking a fiction writing class. The Dialogue Punctuation Rules Get ahead of the game! Use a comma between the dialogue and the tag line (the words used to identify the speaker: "he said/she said"):"I would like to go to the beach this weekend," she told him as they left the apartment.Periods and commas go inside the quotation marks in American writing (the Brits have slightly different rules); other punctuation -- semicolons, question marks, dashes, and exclamation points -- goes outside unless it directly pertains to the material within the quotes, as in this example from Raymond Carver's short story "Where I'm Calling From":"I don't want any stupid cake," says the guy who goes to Europe and the Middle East. Common Punctuation Dialogue Mistakes Incorrect:

Punctuation in direct speech | Oxford Dictionaries In reports and stories, a writer often wants to tell the reader what someone has said. There are two ways of doing this. The speaker’s words can either be reported (in a style known as reported speech), or they can be quoted directly in what’s called direct speech. Reported speech In reported speech, the actual words are not usually quoted directly. The 180 respondents said that the main reason for setting up in business was to be their own boss. Trade union representatives expressed their satisfaction at the news that there would be no job losses. Direct speech In direct speech, various punctuation conventions are used to separate the quoted words from the rest of the text: this allows a reader to follow what’s going on. The words that are actually spoken should be enclosed in inverted commas: ‘He’s very clever, you know.’ In British English, the usual style is to use single inverted commas but it is not wrong to use double ones: “He’s very clever, you know.” ‘I don’t agree,’ I replied. ‘No!’

Comma Or No Comma--Questions About Punctuating Dialogue June 29, 2012 by Fiction Editor Beth Hill last modified July 19, 2012 Actually, we’re going to address a handful of questions, not just one. These were begun in the comment section of Punctuation in Dialogue, and I thought they deserved a larger audience. (Some questions are answered in the comments section. Others have been pasted into the body of the article.) Several of these questions have to do with commas. Learn the rules, yes. If your story goes nowhere or your characters are flat or you have no idea how to connect story elements, then you can worry about not getting a contract. Do be consistent. And keep in mind that what’s wrong is not always unacceptable. While these questions were asked about dialogue, the questions may pertain to punctuation use in any sentence. Question My question is about taglines. “Now you have to watch the snowboarding competition with me,” I demanded, as I dragged him onto the couch. “Megan, come with us,” Lily said, as she grabbed Megan’s hand. Reply Reply

MLA Formatting and Style Guide Summary: MLA (Modern Language Association) style is most commonly used to write papers and cite sources within the liberal arts and humanities. This resource, updated to reflect the MLA Handbook (8th ed.), offers examples for the general format of MLA research papers, in-text citations, endnotes/footnotes, and the Works Cited page. Contributors:Tony Russell, Allen Brizee, Elizabeth Angeli, Russell Keck, Joshua M. Guidelines for referring to the works of others in your text using MLA style are covered in chapter 6 of the MLA Handbook and in chapter 7 of the MLA Style Manual. Basic in-text citation rules In MLA style, referring to the works of others in your text is done by using what is known as parenthetical citation. General Guidelines The source information required in a parenthetical citation depends (1.) upon the source medium (e.g. In-text citations: Author-page style MLA format follows the author-page method of in-text citation. Wordsworth, William. Burke, Kenneth. Citing the Bible

Rules for Writing Numbers Except for a few basic rules, spelling out numbers vs. using figures (also called numerals) is largely a matter of writers' preference. Again, consistency is the key. Policies and philosophies vary from medium to medium. America's two most influential style and usage guides have different approaches: The Associated Press Stylebook recommends spelling out the numbers zero through nine and using numerals thereafter—until one million is reached. Here are four examples of how to write numbers above 999,999 in AP style: 1 million; 20 million; 20,040,086; 2.7 trillion. The Chicago Manual of Style recommends spelling out the numbers zero through one hundred and using figures thereafter—except for whole numbers used in combination with hundred, thousand, hundred thousand, million, billion, and beyond (e.g., two hundred; twenty-eight thousand; three hundred thousand; one million). Rule 1. Examples: Twenty-three hundred sixty-one victims were hospitalized. Example: 1956 was quite a year. Rule 2a.

NESFA Science Fiction & Fantasy Short Story Contest The 2016-2017 NESFA Science Fiction & Fantasy Short Story Contest is open from Spring 2016 through September 30, 2016. with winners to be announced at Boskone 54 in February 17–19, 2017. The past winners are listed here. Short Story Contest Rules Welcome to the NESFA science fiction/fantasy short story contest, with prizes to be awarded at Boskone 54, in February 2017. Note that there are some changes to last year's contest rules. Please read these rules and, if you have any questions or concerns, ask us before submitting your story. The purpose of this contest is to encourage amateur and semi-professional writers to reach the next level of proficiency. The deadline for submissions is September 30, 2016 at 11:59PM EDT. A qualifying story must have strong science fiction or fantasy elements and must be shorter than 7,500 words. The contest will be limited to the first 50 qualifying entries. Judges will provide feedback for all qualifying contest entries as soon after Boskone as possible.