How to Spot Psychopaths: Speech Patterns Give Them Away 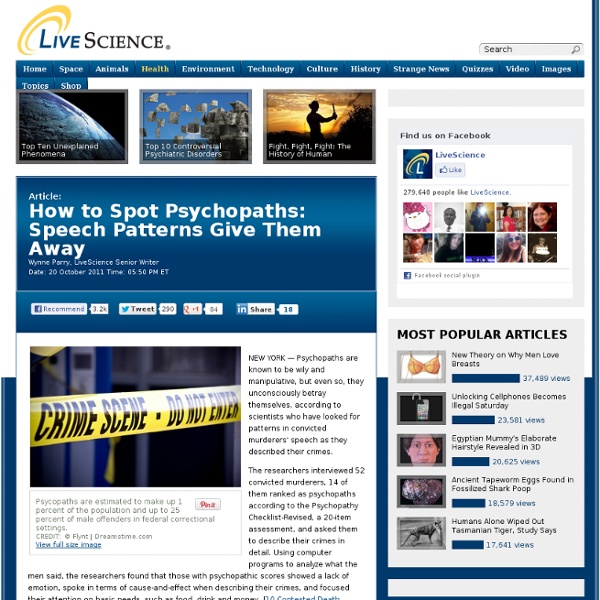 NEW YORK — Psychopaths are known to be wily and manipulative, but even so, they unconsciously betray themselves, according to scientists who have looked for patterns in convicted murderers' speech as they described their crimes. The researchers interviewed 52 convicted murderers, 14 of them ranked as psychopaths according to the Psychopathy Checklist-Revised, a 20-item assessment, and asked them to describe their crimes in detail. Using computer programs to analyze what the men said, the researchers found that those with psychopathic scores showed a lack of emotion, spoke in terms of cause-and-effect when describing their crimes, and focused their attention on basic needs, such as food, drink and money. [10 Contested Death Penalty Cases] "The beautiful thing about them is they are unconsciously produced," Hancock said. These unconscious actions can reveal the psychological dynamics in a speaker's mind even though he or she is unaware of it, Hancock said. What it means to be a psychopath

Pronouns and Confessions In Statement Analysis, the first thing we do when we receive a written statement is photocopy it and file the original. I often make several copies and like to check my work with others. When work is shared, we only submit the statement and the allegation to the analyst. With the copy of the statement, before I read it, I circle the pronouns. This is done before reading it, or any other analysis. Pronouns solve many crimes. "mine". Pronouns are understood by children at a very early age. At an early age, children will use the pronoun "my" and "mine" for everything from food, to toys, to even attention. Pronouns show ownership. Pronouns show hidden confessions. As cases come and go; one day they are being reported everywhere, only later to be displaced by another case, observe carefully what the accused says. In Statement Analysis, we listen to what words are used, and not what we think the author meant. If someone used the past tense in a verb, we acknowledge that they used past tense. "my".

What Your Facebook Photos Say About Your Personality The way your Facebook profile looks may suggest a lot about your personality, a new study finds. Researchers found that extroverts and neurotics both upload significant numbers of photos to their Facebook pages, but extroverts tend to change their profile cover photos, while neurotics tend to upload more photos per album. The investigators recruited more than 100 people between the ages of 17 and 55, and the participants completed questionnaires about their personality and demographics. More than 70 percent of the participants were women. The link between extroversion and the tendency to upload lots of photos may not seem surprising, but how can the same tendency be explained in neurotics, whom the researchers describe as people who are "characterized by a temperamental nature, being prone to stress and anxiety"? "As socially anxious individuals, they see Facebook [as] a safe place for self-expression and to compensate for their offline deficiencies," Eftekhar told Live Science.

Narcissism, Psychopathy, and Evil « mind.expressions DELANY DEAN, JD, PhD delanydean.com KC Mindfulness crimlawdoc@gmail.com Introduction: During both my professional careers (criminal law and psychology), two areas of particular interest to me have been psychopathy and narcissism. Underneath the superficial charm, the narcissist/psychopath always has a “me-first” mentality. A good non-technical book about this phenomenon is: The Sociopath Next Door by Martha Stout [the term “sociopath” is closely related to the term “psychopath”]. Some good web resources about the phenomenon known as “narcissistic rage” are in my “del.icio.us” links (click over in the side column on this blog, where it says “And, Check Out…”). Recently, Nature magazine published a great article [pdf] on the neuroscience of psychopaths, as investigated by an ingenious study being run by a group of Dutch researchers. “Although there is a higher number of psychopaths among violent criminals, a psychopath is not necessarily someone who is violent. Authoritarianism and Psychopathy

"I Didn't Do That" in Statement Analysis Last month, Psychology Today had an article about "This and That", saying, when someone lies about not doing "that", it means that a "this" exists. The subject didn't do "that", but did do "this", without "that" being defined. This violates principle #3 of the reliable denial. Here is an example from politicians. Note how close they come to issuing a reliable denial but cannot: Claiming she spent a marathon 12 consecutive days in Albany on “legislative business,” Queens Assemblywoman Vivian Cook pocketed $171 for each reported overnight stay — a total $2,197 in taxpayer money from March 21 to April 1, 2010. The Legislature was in session just three of those days — and Cook was absent for all three, records show. “Me? Note the response with a question is a pause due to the sensitive question. “I don’t lie, I don’t cheat, and I don’t steal,” said Cook, whose nonprofit Rockaway Boulevard Local Development Corp. prompted an investigation for allegedly misusing taxpayer funds. Gov.

Check mates: A brief look at courtship requests (Part 2) | drmarkgriffiths In my previous blog on courtship requests (e.g., men asking for a woman’s phone number, men asking women out for a drink, etc.), I examined a number of Dr. Nicolas Guéguen’s studies on the effects that various factors had solicitation success. In this blog, I briefly overview such factors as the role of the weather, music, odour, clothes (uniform and colour), flowers, and social status. Weather: In a 2013 issue of Social Influence, Guéguen examined the effect of sunshine on romantic relationships (reasoning that sunny weather puts people in a better mood than non-sunny weather). Music: In a 2014 issue of Psychology of Music, Guéguen and his colleagues examined the extent to which music can play a role in sexual selection. Clothes (uniform): In a 2009 issue of the European Journal of Social Sciences, Guéguen carried out three experiments on whether men wearing a fireman’s uniform made women more receptive to a courtship request. Dr. Further reading Guéguen, N. (2009). Guéguen, N. (2011).

The Psychopath: The Mask of Sanity THE PSYCHOPATH - The Mask of Sanity Special Research Project of the Quantum Future School Imagine - if you can - not having a conscience, none at all, no feelings of guilt or remorse no matter what you do, no limiting sense of concern for the well-being of strangers, friends, or even family members. And pretend that the concept of responsibility is unknown to you, except as a burden others seem to accept without question, like gullible fools. Now add to this strange fantasy the ability to conceal from other people that your psychological makeup is radically different from theirs. You are not held back from any of your desires by guilt or shame, and you are never confronted by others for your cold-bloodedness. In other words, you are completely free of internal restraints, and your unhampered liberty to do just as you please, with no pangs of conscience, is conveniently invisible to the world. How will you live your life? Provided you are not forcibly stopped, you can do anything at all.

How to Lie Without Actually Telling a Lie I'm male, and straight, and married, but if you walked up to me and said: So, you're colorblind? (I am, and for some weird reason I don't want you to know about it) I might say: "Look, a purple flying elephant!" and then proceed out the nearest frying pan into an airlock filled with cheese while eating a fried turkey. OK, on a serious note, it's fairly difficult to misdirect someone away from such a direct approach, partially because it is unknown whether or not they already know the information and are simply testing you. One method not discussed is to answer their question with a question. A more aggressive approach is to not only answer with a question but ask several questions quickly in an annoyed tone of voice. "Do I look like a lesbian?"

What does a person's writing style say about their risk of suicide? Suicidal thoughts are relatively common whereas acts of suicide are, thankfully, far more rare. But this creates a dilemma – how to judge the risk of thoughts turning into action? A new study claims that an objective way is to use a computer programme to analyse a person's writing style. People who are having suicidal thoughts and who use more pronouns relating to the self (I, me, myself) than pronouns relating to others, are likely to take more time to recover, meaning they will be at risk for longer. Mira Brancu and her colleagues investigated 114 US students who'd referred themselves to an outpatient counselling centre at their university, and all of whom said they were having suicidal thoughts. A computer programme analysed the students' answers to these questions, counting the relative number of mentions of first-person pronouns compared with mentions of other people, including friends and family and people's names.

Political Ponerology Home George Anthony's Suicide Note (Full Text) Cynthia Marie, As you get this letter, this should be no surprise that I have decided to leave the earth, because I need to be with Caylee Marie. I cannot keep going because it should be me that is gone from this earth, not her. I have lived many years, I am satisfied with my decision because I have never been the man you, Lee, Casey & especially Caylee Marie deserved. I have never been the man any of you could count on. I have always let each of you down in more ways than I can remember. My loss of life is meaningless. Cynthia Marie, you have always worked the hardest, given the most to me, and I have never Thanked you. 28+ years ago, you corrected me, a man who has now found his identity in life. Page -- I cannot be strong anymore. You were always the one that provided for her. I blame myself for her being gone! Caylee Marie, I miss her. I sit here, falling apart, because I should have done more. She was so close to home, why was she there? I want this to go away for Casey. Lee, I am sorry