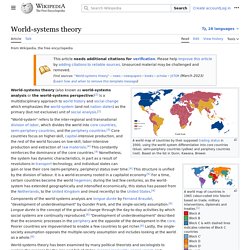 Based on the list in Dunn, Kawana, Brewer. Books on consciousness and psychic phenomena - Campaign for Open Science. Order: Paperback Kindle This is the first book in more than 40 years to provide a comprehensive scientific overview of research in the field of parapsychology, explaining what we know and don't know about so-called psi phenomena, such as telepathy, precognition or psychokinesis. 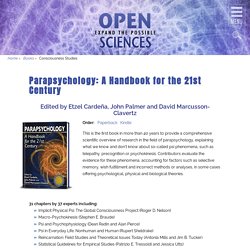 Contributors evaluate the evidence for these phenomena, accounting for factors such as selective memory, wish fulfillment and incorrect methods or analyses, in some cases offering psychological, physical and biological theories. 31 chapters by 37 experts including: » Implicit Physical Psi: The Global Consciousness Project (Roger D. Existential phenomenology. Overview[edit] In contrast with his former mentor Edmund Husserl, Heidegger (in his Being and Time) put ontology before epistemology and thought that phenomenology would have to be based on an observation and analysis of Dasein ("being-there"), human being, investigating the fundamental ontology of the Lebenswelt (lifeworld, Husserl's term) underlying all so-called regional ontologies of the special sciences. 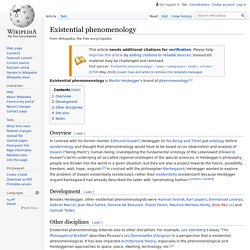 In Heidegger's philosophy, people are thrown into the world in a given situation, but they are also a project towards the future, possibility, freedom, wait, hope, anguish.[2] In contrast with the philosopher Kierkegaard, Heidegger wanted to explore the problem of Dasein existentially (existenzial), rather than existentielly (existenziell) because Heidegger argued Kierkegaard had already described the latter with "penetrating fashion". [citation needed] Development[edit] Other disciplines[edit] David Abram. In 1996 Abram coined the phrase "the more-than-human world" as a way of referring to earthly nature (introducing it in the subtitle of The Spell of the Sensuous and throughout the text of that book); the term was gradually adopted by other scholars, theorists, and activists, and has become a key phrase within the lingua franca of the broad ecological movement. 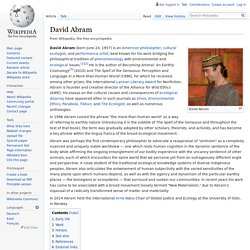 Abram was perhaps the first contemporary philosopher to advocate a reappraisal of "animism" as a complexly nuanced and uniquely viable worldview — one which roots human cognition in the dynamic sentience of the body while affirming the ongoing entanglement of our bodily experience with the uncanny sentience of other animals, each of which encounters the same world that we perceive yet from an outrageously different angle and perspective. In 2014 Abram held the international Arne Næss Chair of Global Justice and Ecology at the University of Oslo, in Norway. Early life[edit] Work[edit] Metapsychology Online Reviews. Metapsychology Online Reviews. Untitled. Phenomenology - By Branch / Doctrine - The Basics of Philosophy. Introduction | History of Phenomenology | Types of Phenomenology Phenomenology is a broad discipline and method of inquiry in philosophy, developed largely by the German philosophers Edmund Husserl and Martin Heidegger, which is based on the premise that reality consists of objects and events ("phenomena") as they are perceived or understood in the human consciousness, and not of anything independent of human consciousness. 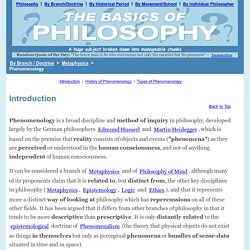 It can be considered a branch of Metaphysics and of Philosophy of Mind, although many of its proponents claim that it is related to, but distinct from, the other key disciplines in philosophy (Metaphysics, Epistemology, Logic and Ethics), and that it represents more a distinct way of looking at philosophy which has repercussions on all of these other fields.

It has been argued that it differs from other branches of philosophy in that it tends to be more descriptive than prescriptive. Phenomenological description. Early proponents[edit] Edmund Husserl[edit] However, although Husserl's descriptions may begin at this basic level, they are often considerably more lengthy, involved and complex. 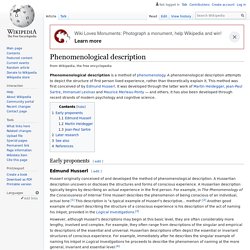 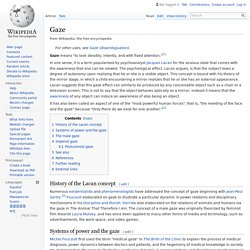 "[1] Assistant Professor Eric Dodson. Click here for voice (Approx. 187KB WAV file) "In sum, the heart of humanistic psychology is a matter of personal involvement in the struggle to fathom the meaning of being a human being... 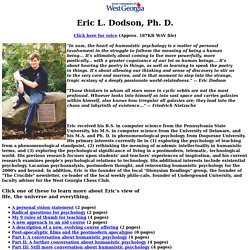 It's ultimately about coming to live more powerfully, more poetically... with a greater cognizance of our lot as human beings... Male gaze. The male gaze is a concept coined by feminist film critic Laura Mulvey. 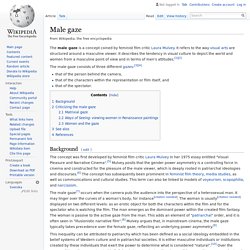 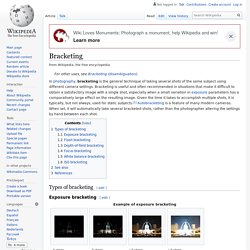 Technically, this can be accomplished by changing either the shutter speed or the aperture, or, with digital cameras, the ISO speed, or combinations thereof. Humanistic psychology. Humanistic psychology is a psychological perspective which rose to prominence in the mid-20th century in response to the limitations of Sigmund Freud's psychoanalytic theory and B.F. Skinner's behaviorism.[1] With its roots running from Socrates through the Renaissance, this approach emphasizes individuals inherent drive towards self-actualization and creativity. It typically holds that people are inherently good. It adopts a holistic approach to human existence and pays special attention to such phenomena as creativity, free will, and human potential. Phenomenology.

Phenomenology may refer to: Disambiguation page providing links to topics that could be referred to by the same search term. Change The Rules. Labour should focus on building a new co-operative economy from the ground up. Labour’s electoral defeat has set off a new race for leader, and a fervent debate about how the party should regain electoral success. But if the next leader wants to build long standing success for the Labour movement, they should look beyond Parliament. Analysis and action on living standards. Democratic Leadership in a Populist Age by Chris Patten. Better Buses for Greater Manchester. Passenger-led campaign for affordable, easy, reliable, regulated buses. Currently, most local authorities have no control over commercial bus services. This means that bus operators only run services if they make a profit, and they charge whatever they like. There is little integration across different companies and some communities have few or no buses at all.

Better Buses for Greater Manchester was set up by We Own It and the Foundation for Integrated Transport to campaign for a regulated network. This will give Greater Manchester Combined Authority planning powers to coordinate the network and demand bus companies follow certain standards through contracts. Regulation will allow: Proper planning and network expansion. Tags Municipal ownership Building power. Would the Scandinavians want Scotland? Tony Blair’s speech on the future of Labour and progressive politics: full text. Would an independent Scotland follow the nordic model. Uncivilisation: The Dark Mountain Manifesto - Dark Mountain. Analysis and action on living standards. Five ways to fund a Green New Deal. By David Powell, Lukasz Krebel and Frank van Lerven. Humanistic psychology. Waldorf Curriculum - Infant & Toddler.

Nordic model. The University of Manchester. How To Archives. University Degree Courses Featuring Dr. Steve Taylor. Index Ranking. Project Renaissance with Win Wenger, Ph.D. Tools for creating ideas. Will Project - A Program of Research on the Will and Its Applications. Visual thinking. Sunnyside Day Nursery. Meme. Imagination. Home - Time to Think. People House. Ken Wilber. The Ten Components - Time to Think. Richard Brown – The usual phlegm and philosophy. BANT and Beyond: Advanced Sales Qualification for SDRs & AEs. The Basics of Philosophy: A huge subject broken down into manageable chunks. Articles. The Memetic Tribes Of Culture War 2.0. The Stoa. A New Republic of the Heart. Understanding the Blue Church – Deep Code.