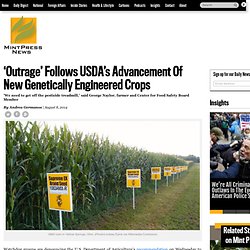 (Photo/Lindsay Eyink via Wikimedia Commons) Watchdog groups are denouncing the U.S. Department of Agriculture’s recommendation on Wednesday to approve new varieties of genetically engineered corn and soybeans as a path towards more toxic pesticides that threaten the environment and public health. 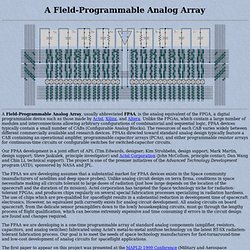 Unlike the FPGAs, which contain a large number of modules and interconnections allowing arbitrary configurations of combinatorial and sequential logic, FPAA devices typically contain a small number of CABs (Configurable Analog Blocks). The resources of each CAB varies widely between different commercially available and research devices. FPAAs directed toward standard analog design typically feature a CAB containing an operational amplifer, programmable capacitor arrays (PCAs), and either programmable resistor arrays for continuous-time circuits or configurable switches for switched-capacitor circuits. The FPAA we are developing assumes that a substantial market for FPAA devices exists in the Space community (manufacturers of satellites and deep space probes). 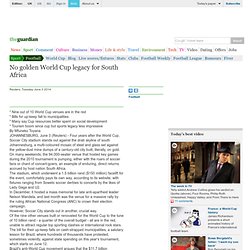 After Supreme Court Rejects Appeal, Will Obama Jail New York Times Reporter James Risen? David Cameron is using up valuable political capital in blocking Juncker. ‘There is a clear imperative to address the growing disconnect between Europe’s institutions and the voters.’ 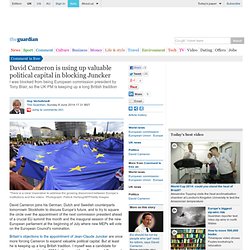 Photograph: Patrick Hertzog/AFP/Getty Images David Cameron joins his German, Dutch and Swedish counterparts tomorrowin Stockholm to discuss Europe's future, and to try to square the circle over the appointment of the next commission president ahead of a crucial EU summit this month and the inaugural session of the new European parliament at the beginning of July where new MEPs will vote on the European Council's nomination. The Best Evidence Yet That Stephen Colbert Is Better Than Fox, MSNBC and CNN. The news: Jon Stewart would be the first person to tell you that The Daily Show is just a show that followed "puppets making crank phone calls. 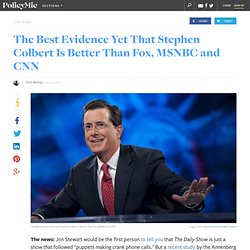 " But a recent study by the Annenberg Public Policy Center titled found that fellow funnyman Stephen Colbert might be doing a better job of educating the country on serious issues like campaign finance than coverage from actual cable news shows on CNN, Fox News, MSNBC and broadcast networks. "It's the first study actually showing that Colbert is doing a better job than other news sources at teaching people about campaign financing," lead author Bruce W.

Hardy, a senior researcher at the APPC, is quoted as saying. Relatives-of-victims-of-drone-strikes-drop-appeal. WASHINGTON — The relatives of three United States citizens killed in American drone strikes without trial, including Anwar al-Awlaki, a radical Muslim cleric, have decided not to appeal a federal judge’s dismissal of a lawsuit they filed against Obama administration officials. 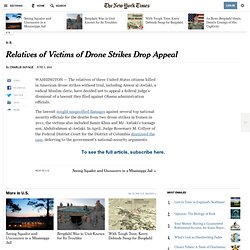 The lawsuit sought unspecified damages against several top national security officials for the deaths from two drone strikes in Yemen in 2011; the victims also included Samir Khan and Mr. Awlaki’s teenage son, Abdulrahman al-Awlaki. In April, Judge Rosemary M. Collyer of the Federal District Court for the District of Columbia dismissed the case, deferring to the government’s national-security arguments. In a statement, Nasser al-Awlaki, the father of Mr. The American Civil Liberties Union and the Center for Constitutional Rights helped bring the suit, and the rights center said in a statement that “our system of checks and balances failed these families.”

Government officials have said that Mr. Jurors hear of deputies' attempt to coerce FBI agent - Los Angeles Times. Two Los Angeles County Sheriff's Department sergeants showed up at an FBI agent's home in September 2011 and told her that they were in the process of obtaining a warrant for her arrest. 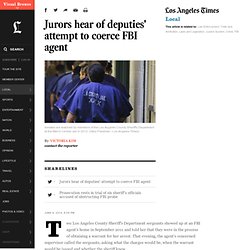 That evening, the agent's concerned supervisor called the sergeants, asking what the charges would be, when the warrant would be issued and whether the sheriff knew. After hanging up the phone, Sgt. Maricella Long turned to her partner and said with a chuckle: "They're scared. " "You're still rolling," Sgt. Scott Craig told her, pointing out that the recorder was on. Fox: Political genius Obama gives Hillary book tour huge boost with obviously staged Benghazi arrest. Life — if you can call it that — under Israel’s Iron Dome. I’ve become pretty great at rocket dodging. 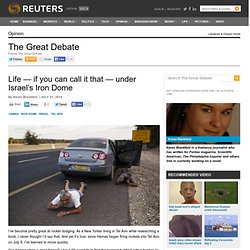 As a New Yorker living in Tel Aviv while researching a book, I never thought I’d say that. And yet it’s true: since Hamas began firing rockets into Tel Aviv on July 8, I’ve learned to move quickly. Last Week Tonight with John Oliver takes on a... - Media Matters for America. Ugly Right-Wing Underbelly of the Libertarian Cause on Display at Silicon Valley Conference. Kentucky Sen. and 2016 GOP Presidential candidate Rand Paul. 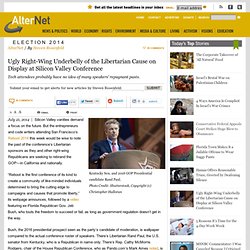 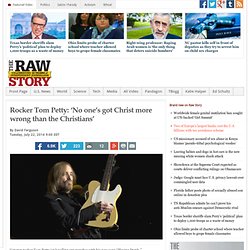 In an interview with Billboard magazine, Petty said that he wrote the song about the decades of child sex abuse in the Catholic church and the elaborate lengths that priests and their leaders have gone to cover up the crimes. New survey shows libertarianism on the rise among Millennials. Millennials are libertarian, according to a new survey. Harvard University Institute of Politics released its 25th “Survey of Young Americans Attitudes toward Politics and Public Service” last week, showing that fiscal responsibility and social tolerance were top priorities for young Americans. Regarding fiscal responsibility, Millennials disapprove of the Obama administration — 47 percent approved of the president’s job performance as of April, an 11 percent drop since November 2009. Rick Perry and John McCain tag team against Rand Paul Sunday morning.

Texas Gov. Rick Perry called Sen. Rand Paul (R-Ky.) an “isolationist” once again during an appearance on CBS’ “Face the Nation” Sunday morning, echoing his Washington Post op-ed Friday, where he blasted Paul’s foreign policy. “I disagree with Senator Paul’s representation of what America should be doing. He talked about basically what I consider to be isolationist policies. America can no longer come back on to the continental United States and draw a red line around the shore of America and think that we’re somehow another not going to be impacted,” Perry said Sunday.

Facebook. 8 Other Laws That Could Be Ignored Now That Christians Get To Pick And Choose. The owners of a chain of stores called Hobby Lobby don't like Obamacare. In particular, they really don't like the part that requires insurance companies to cover contraceptives. Normally, people who don't like a law petition the government to change that law. That's how a nation of laws works. But these men are Christians.