The Living Room Candidate. Ten of the Most Successful Presidential Campaign Commercials Ever Made [Videos] Like it or not, the 2016 presidential campaign season is in full force. 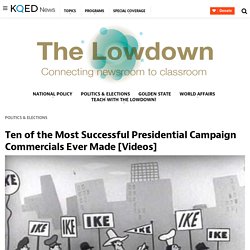 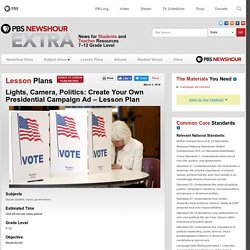 Lesson Idea: Election Campaign Ads. Teachers can use this opportunity to teach the Propaganda Techniques commonly used in campaign attack ads by candidates and incumbents running for office in a way that will engage students’ technological and creative interests. 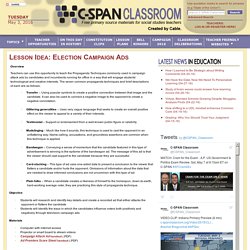 The Living Room Candidate - For Teachers - Lessons. Download the Lessons Lessons have been designed for use by high school teachers and students. 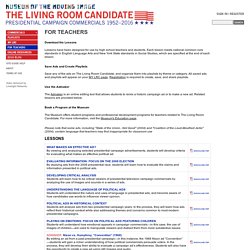 Each lesson meets national common core standards in English Language Arts and New York State standards in Social Studies, which are specified at the end of each lesson. How to Write a Speech for School Elections (with Sample Speeches) Expert Reviewed Four Parts:Crafting Your MessageStructuring Your SpeechPreparing for DeliverySample SpeechesCommunity Q&A If you’re running for office in school elections, delivering your candidate speech can be one of the most important — and nerve-wracking — parts of the whole process. 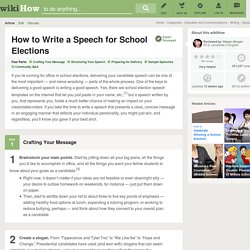 One of the keys to delivering a good speech is writing a good speech. Yes, there are school election speech templates on the internet that let you just paste in your name, etc.,[1] but a speech written by you, that represents you, holds a much better chance of making an impact on your classmates/voters. If you take the time to write a speech that presents a clear, concise message in an engaging manner that reflects your individual personality, you might just win, and regardless, you'll know you gave it your best shot. Anatomy of a Stump Speech - Interactive Feature. On the Stump: Examining the Form and Function of Campaign Speeches. Congress for Kids: [Elections]: The Campaign. The Campaign All Aboard the Campaign Train! 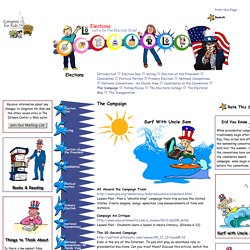 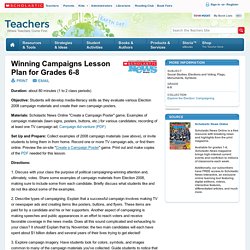 Materials: Scholastic News Online "Create a Campaign Poster" game; Examples of campaign materials (lawn signs, posters, buttons, etc.) for various candidates; recording of at least one TV campaign ad; Campaign Ad-venture (PDF) Set Up and Prepare: Collect examples of 2008 campaign materials (see above), or invite students to bring them in from home. Record one or more TV campaign ads, or find them online. Campaign Strategy Lessons, Activities and Unit Plan. Economy in The Reagan Era. The Miseries of Stagflation When Ronald Reagan took over the leadership of the United States in 1981, he inherited an economy that was in terrible shape—the worst American economy, in fact, since the Great Depression of the 1930s. 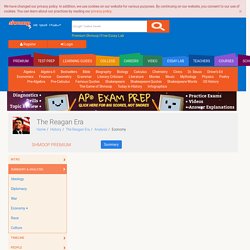 Americans had enjoyed a prolonged period of widespread prosperity from the beginning of World War II through the end of the 1960s, but that long boom—built largely on the absolute supremacy of American industrial production, a temporary consequence of the destruction wrought on every other major industrial power (Germany, Britain, France, Italy, Russia, Japan) during World War II—had run out of steam by the early 1970s. The economy began to sag under the weight of a multitude of new structural challenges.

As Europe and Japan finished rebuilding from the Second World War, American manufacturers lost their effective global monopoly and soon found themselves struggling to compete with foreign goods, cutting sharply into corporate profits and stock-market values. FDR's New Deal. Franklin Delano Roosevelt assumed the presidency at the darkest hour of the Great Depression, pledging to fix the economy by getting the federal government involved. 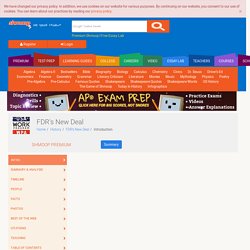 While Roosevelt's New Deal did not, in fact, end the Great Depression, it did permanently alter American society and create many of the structures that sustained prosperity following World War II. Why does Franklin Delano Roosevelt still matter, sixty years after he died just 82 days into his unprecedented fourth term in the White House? Because FDR made the modern presidency. Because the New Deal made modern American society. Whether you love FDR's politics and policies or loathe them, it's impossible to imagine the world we live in today without them. Democratic Party on the Issues. 2016 Presidential Election Candidate Quiz - Find Your Match! - 2016 Presidential Election Candidate Quiz - Find Your Match! - ProCon.org. Reaganomics: Resources - Life in America: The Reagan Years, A Webography. Michael Douglas in Wall Street (1987) Milton Friedman on Donahue (1979) Reaganomics: A Very Short Introduction. 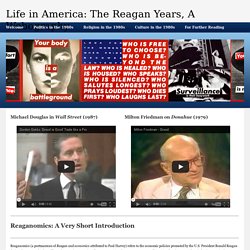 Reaganomics Facts, information, pictures. Reaganomics. President Ronald Reagan unveils a new tax program, calling it "a second American Revolution for hope and opportunity. " Upon taking office, Reagan called for a phased 30% tax cut, but Congress would only agree to a 25% cut. New Deal - Facts & Summary. Despite the best efforts of President Roosevelt and his cabinet, however, the Great Depression continued–the nation’s economy continued to wheeze; unemployment persisted; and people grew angrier and more desperate. So, in the spring of 1935, Roosevelt launched a second, more aggressive series of federal programs, sometimes called the Second New Deal. In April, he created the Works Progress Administration (WPA) to provide jobs for unemployed people. FDR's New Deal Summary & Analysis. Franklin Delano Roosevelt entered the White House in 1932 when the Great Depression was beating America like an angry King Kong, promising "a new deal for the American people.

" Compared To What? - Political Analysis: Roosevelt's-New Deal Compared to Reagan's Reaganomics. By: Dan Reed, American Citizen For thirty-years Americans have received a repetitive drumbeat of anti-tax and anti-government rhetoric designed to convince the American people that our U.S. Government can’t do anything well, and each dollar of taxes is always a dollar wasted! These same groups keep telling Americans “Washington doesn’t have a revenue problem, it has a spending problem.” Election Central 2016. Crash Course Government and Politics #39. Meet the Presidential Candidates in Election 2016 – Lesson Plan. PBS Election. The Contenders - 16 for '16 PBS, in partnership with OZY Media, is proud to present The Contenders-16 for '16, a documentary series that examines the most compelling and influential presidential campaigns in modern history. From Jesse Jackson’s groundbreaking 1984 and 1988 campaigns to Barry Goldwater’s 1964 launching of a brand of conservatism that influenced both Republican Ronald Reagan and even Democratic Hillary Clinton.

The Contenders covers sixteen stories from the past 50 years of presidential election history. The series shows how previous elections are still influencing today in unexpected ways. Grades 6-12 FRONTLINE: How Voting Laws Have Changed Examine data about the voting rights laws that most impact Americans' access to the ballot box and how they’ve changed across the country in recent years, in this interactive from FRONTLINE: Ballot Watch. Grades 9-12. 2016 Campaign Connection. By the People: Election 2004 . For Kids, Parent and Teachers . Lesson Plans. [an error occurred while processing this directive] The lesson plans listed below are organized by grade level and topic. All are designed to tie to state and national standards for civics, history, math, and language arts. PoliticalPartiesConventions1. CVCS Lesson Byerly all. Political Issues of 2016. Political Party Quiz.

The aim of a political party is to elect officials who will try to carry out the party's policies. A political party offers candidates for public office. Edutopia. Engage Future Voters with Election Projects.