American Fascism, in 1944 and Today - NYTimes.com. My grandfather warned about hucksters spouting populist themes but manipulating people and institutions to achieve the opposite. 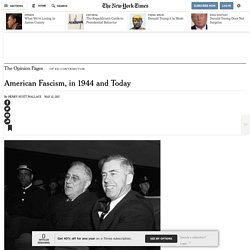 They pretend to be on the side of ordinary working people — “paying lip service to democracy and the common welfare,” he wrote. But at the same time, they “distrust democracy because it stands for equal opportunity.” They invariably put “money and power ahead of human beings,” he continued. “They demand free enterprise, but are the spokesmen for monopoly and vested interest.” They also “claim to be super-patriots, but they would destroy every liberty guaranteed by the Constitution.” They bloviate about putting America first, but it’s just a cover. They need scapegoats and harbor “an intensity of intolerance toward those of other races, parties, classes, religions, cultures, regions or nations.” My grandfather acknowledged the great difference between American fascists and other countries’ murderous authoritarians. The Real Origins of the Religious Right. One of the most durable myths in recent history is that the religious right, the coalition of conservative evangelicals and fundamentalists, emerged as a political movement in response to the U.S. 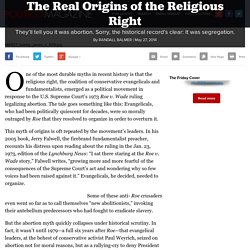 Supreme Court’s 1973 Roe v. Wade ruling legalizing abortion. The tale goes something like this: Evangelicals, who had been politically quiescent for decades, were so morally outraged by Roe that they resolved to organize in order to overturn it. This myth of origins is oft repeated by the movement’s leaders. In his 2005 book, Jerry Falwell, the firebrand fundamentalist preacher, recounts his distress upon reading about the ruling in the Jan. 23, 1973, edition of the Lynchburg News: “I sat there staring at the Roe v. Story Continued Below Some of these anti- Roe crusaders even went so far as to call themselves “new abolitionists,” invoking their antebellum predecessors who had fought to eradicate slavery. But the abortion myth quickly collapses under historical scrutiny. In Green v. The Brainwashing Of My Dad By Fox, Rush Limbaugh & Hate Media - Update. Many of us understand the damage that has been done by the likes of Rush Limbaugh, FOX News, and Hate Media. 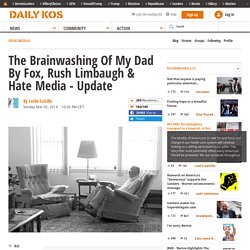 You can hear the promotion of blatant racism, homophobia, misogyny and bigotry just by turning on the tv, radio or computer. Malicious lies are perpetuated until they are believed by those who have been sucked in and who now use right-wing media as their only source of 'news'. Jen Senko is a filmmaker who watched the transformation of her father as he slowly came to believe the extreme right-wing propaganda. Senko is now making a documentary about it called The Brainwashing Of My Dad. Above is the trailer, and here is a personal note Jen sent me: "I was inspired to make this film after watching my father – a non-political Democrat – turn into a right-wing fanatic after a change in his car commute exposed him to reactionary shows on talk radio.

Richard D. Wolff: "The Game Is Rigged" On the Meaning of Capitalism, We Don't Agree. (Photo: Capitalism definition via Shutterstock) Within conversations on the left, many of us use the term "capitalism," but we aren't all using it to mean the same thing. 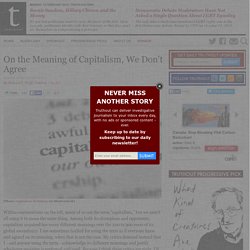 Among both its champions and opponents, capitalism acquired too many different meanings over the 200 to 300 years of its global ascendancy. I am sometimes faulted for using the term as if everyone knew and agreed on its meaning, when that is not the case. My critics demand instead that I - and anyone using the term - acknowledge its different meanings and justify whichever meaning is preferred and used. Because I think these critics are right, I'd like to define what capitalism means in my ongoing discussion of this topic at Truthout. Capitalism is one particular way of organizing the interpersonal relationships of people in their work activities.

Employers make all key production decisions - what to produce, how and where - with little or no input from employees. Woodrow Wilson was extremely racist — even by the standards of his time. This Wednesday, a group of Princeton students stormed the offices of president Christopher Eisgruber to demand that Woodrow Wilson's name be removed from all programs and buildings at the university. 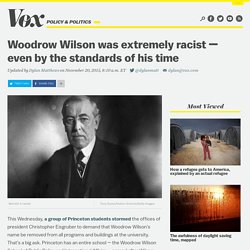 That's a big ask. Princeton has an entire school — the Woodrow Wilson School of Public Policy and International Affairs — named after Wilson, who served as university president from 1902 to 1910, before his time in the White House. It also has Wilson College, a residential college for undergrads. So far, the university is standing firm, insisting that, in the Associated Press's words, "it is important to weigh Wilson's racism, and how bad it was, with the contributions he made to the nation. " And outside of Princeton, the incident is being seized upon as yet another example of campus PC run amok: Leaving aside the broader question of whether Wilson's name should be removed, let's be clear on one thing: Woodrow Wilson was, in fact, a racist pig. Apic/Getty Images Keystone/Getty Images.