100 Ways to Serve Others 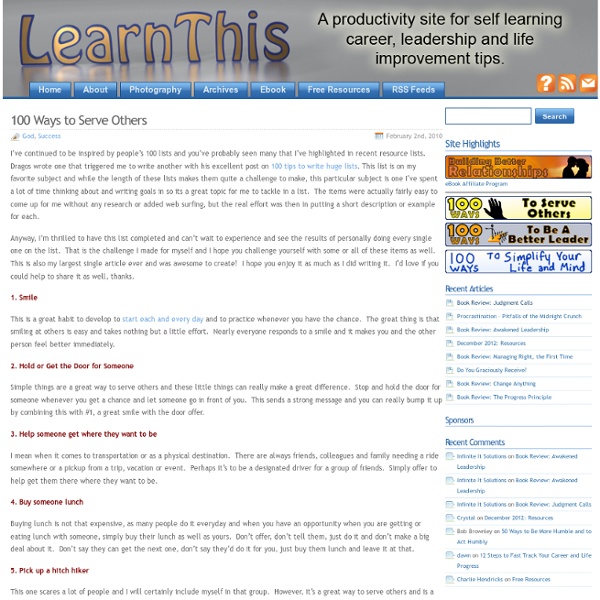 I’ve continued to be inspired by people’s 100 lists and you’ve probably seen many that I’ve highlighted in recent resource lists. Dragos wrote one that triggered me to write another with his excellent post on 100 tips to write huge lists. This list is on my favorite subject and while the length of these lists makes them quite a challenge to make, this particular subject is one I’ve spent a lot of time thinking about and writing goals in so its a great topic for me to tackle in a list. The items were actually fairly easy to come up for me without any research or added web surfing, but the real effort was then in putting a short description or example for each. Anyway, I’m thrilled to have this list completed and can’t wait to experience and see the results of personally doing every single one on the list. That is the challenge I made for myself and I hope you challenge yourself with some or all of these items as well. 1. 2. 3. 4. 5. 6. People have car trouble all the time. 7. 8. 9. 10.

10 places that don’t exist (but should) We've all read a book or watched a movie and wished the places it transported us to were real. Some of the most enduring destinations are fictional. Well, not completely. Some were inspired by real places that resonated with their authors. So, here are my top mythical locations. What have I missed? 10 Signs You Have Found Your Soulmate “Your soul mate makes you feel entirely intact, like no piece is missing from the puzzle. A life partner, on the other hand, can be a great supporter and long-time companion, but is limited in his or her capacity to enrich your spirit.” ~ Dr. Carmen Harra Soul Mates. 75 Ways To Stay Unhappy Forever Dale Carnegie once said, “It isn’t what you have, or who you are, or where you are, or what you are doing that makes you happy or unhappy. It’s what you think about.” I don’t think anyone could say it any better than that. I’ve watched so many friends search tirelessly for happiness by changing jobs, moving to new cities, pursuing intimate relationships, and tweaking all sorts of other external factors in their lives. And guess what? They’re still unhappy.

How To Train Yourself To Be In The Mood You Want Dec 27, 2010 When you have major changes going on in your life, or you’re just frustrated about where you are, it’s easy to get trapped in a cycle of depression, bad moods and frustration. I know, I’ve been there … and when I’m not careful, I still get there more than I want to. But when I’ve had a particularly hard time, I hit these moments where I’m in a foul mood, or I’m just feeling paralyzed, and I’m just stuck.

70 Reminders to Help You Break Any Barrier I am pleased to introduce this guest article by a new friend John, the creator of HiLife2B, where he hopes to inspire people and to help them achieve their dreams. Follow him on Twitter: @janyasor 1. Believe that even the smallest compliment can save someone’s life 2. Remember that one person can change an entire nation Why I Will Never Have a Girlfriend - nothingisreal.com Tristan Miller German Research Center for Artificial Intelligence[1] 20 December 1999 Why don't I have a girlfriend? 30 Life-Enhancing Things You Can Do in 30 Minutes or Less Many of us attempt to measure our happiness based on the duration of certain favorable experiences in our lives. The longer a favorable experience lasts, the happier we think we’ll be. But the truth is, life is simply a string of small, independent moments that are always changing. Thus, a few minutes well spent here and there can make a big difference in what we get out of life in the long-term. Here are 30 things you can do in 30 minutes or less that will have a positive emotional effect on you and those closest to you.

12 Ways To Make Talking To Strangers Less Awkward post written by: Marc Chernoff Email Let’s face it, fewer moments are more awkward than trying to strike up a casual conversation with someone you don’t know very well. How To Treat Others: 5 Lessons From an Unknown Author Five Lessons About How To Treat People -- Author Unknown 1. First Important Lesson - "Know The Cleaning Lady" During my second month of college, our professor gave us a pop quiz. I was a conscientious student and had breezed through the questions, until I read the last one: "What is the first name of the woman who cleans the school?" Surely this was some kind of joke. Victims of Sexual Abuse background="/bg2/chalk.jpg"> It is very important that when a victim of sexual abuse comes forth and reports the crime to family, friends, law enforcement, and others, that he or she be listened to in the most sincere fashion possible. Studies have shown that the most credible account of what occurred during a rape or child molestation comes from the victim him/herself. Studies suggest that approximately 3-5% of all rape or child molestation allegations that are reported are false...Therefore, nearly 95% are based on a factual incident. When a victim comes forth and reports the crime, there will almost undoubtedly be two sides to the story: the victim's disclosure and the offender's.

20 Things That Mentally Strong People Don't Do I often write about the things I believe we all should be doing, trying or experimenting with in order to maximize our success and happiness. However, it’s not always the things we do that make the biggest difference in our lives; it’s often the things we avoid doing that have the biggest effect. As human beings, we have a strong aversion to not doing; we feel that in order to produce results, there must be an initial action. However, because we are almost always doing something, piling on more and more often has a negative effect, rather than a positive one. Among the mentally strong, there are several actions that are avoided in order to produce the greatest benefit in the shortest period of time. These actions are those that the mentally strong avoid, and that we should consider adapting as our own:

Advice from Somewhere ONE. Give people more than they expect and do it cheerfully. TWO. Marry a man/woman you love to talk to. Creative Resumes : Best of The Best Times have changed. What worked in the past still works but if you want to stand out from the crowd sometimes the only thing that is needed is a little creativity. We all have the creative juice in us but only some of us dare to squeeze it out. These job applicants did it and the results are simply amazing. Although some resumes might not look very practical, it all depends on what field they are trying to land a job in. There are 35 resumes altogether.