How To Make Your Own Lotion Bars 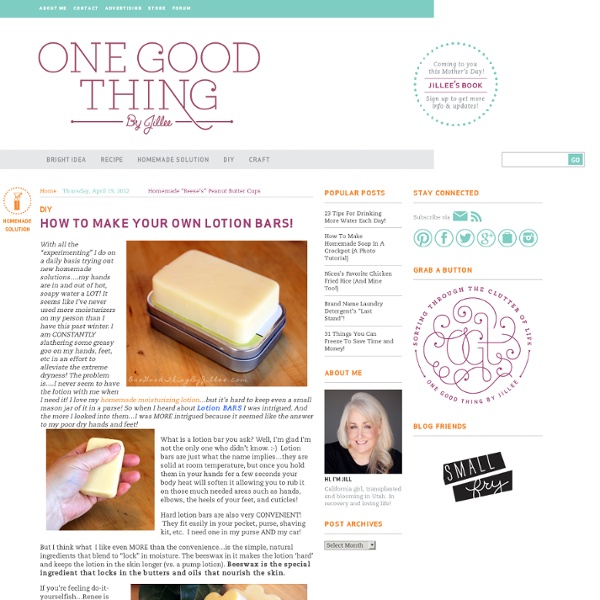 With all the “experimenting” I do on a daily basis trying out new homemade solutions….my hands are in and out of hot, soapy water a LOT! It seems like I’ve never used more moisturizers on my person than I have this past winter. I am CONSTANTLY slathering some greasy goo on my hands, feet, etc in an effort to alleviate the extreme dryness! The problem is….I never seem to have the lotion with me when I need it! I love my homemade moisturizing lotion…but it’s hard to keep even a small mason jar of it in a purse! So when I heard about Lotion BARS I was intrigued. What is a lotion bar you ask? Hard lotion bars are also very CONVENIENT! But I think what I like even MORE than the convenience…is the simple, natural ingredients that blend to “lock” in moisture. If you’re feeling do-it-yourselfish…Renee is sharing her simple 3-ingredient Lotion Bar recipe with us! Well, as you can see…while they’re not picture-perfect like hers…I was pretty happy with how they turned out! Ingredients:

Healthy News and Information Below is my favorite deodorant recipe. It is AMAZING!!! My husband can ride his bike 70 miles in the blazing summer and still no BO! I also love that it’s a great alternative for my girls who are just reaching the age of needing deodorant. How To Wash Your Face And Remove Makeup With Oil The Only Beauty Product You'll Ever Need Coconut oil is an absolute miracle ingredient and an all-around superfood. It's usually thought of as a food full of important vitamins, minerals and fats. But coconut oil isn't just great in the Read

DIY Non-Toxic Sunscreen Getting sunburned sucks, and according to the Environmental Working Group's 2012 survey of over 800 sunscreen brands, 75% of them contained potentially harmful ingredients linked to hormone disruption and even cell damage that may lead you to skin cancer. Yikes. Other than becoming a complete vampire during the summer months, you can also make your own sunscreen in a few simple steps using ingredients that you can easily obtain from the supermarket or from online.

Rethinking Oral Health Care: A Homemade Toothpaste Recipe for Tooth Remineralization Several years ago, I started to question some of the ingredients in commercial toothpastes as well as the approach of modern dentistry in general. I view some modern dentistry practices as appropriate and beneficial. Consider, though, that the foundation of today’s dental philosophy is similar to the mainstream medical model in that it focuses on treatment and not prevention. I believe the focus of dentistry (like medicine) should be prevention of decay and disease through sound nutrition and a healthy lifestyle. This begins in utero (even pre-conception), when the teeth and jaw structure are formed, is well established through breastfeeding, and must be adhered to for one’s lifetime.

5 Simple Beauty Products You Can Make From Coconut Oil Many people who are very choosy about what they eat often forget that their skin is their largest organ, and what you put on your skin gets absorbed into your body. Unfortunately, many conventional soaps, lotions and other beauty products are filled with chemicals and toxins. To replace your chemical-laden products with health-sustaining natural ones, all you need is a jar of coconut oil and a few minutes of free time! This superfood isn't just great for better-balanced hormones, and a stronger immune system--it can feed your skin as well, leaving it soft, glowing and youthful-looking. (Not to mention delicious-smelling!) Once you’ve replaced your standard beauty products with coconut oil, you’ll never go back.

How to fake a British or American Accent English is sometimes a state of confusion for many learners with the large variety of accents, regional slang, and dialects to chose from. Do you speak more American or British or a little bit of both? Which of the major types of English do you find easier to understand, sounds nicer to you, and more difficult to understand? Facts about English: English has a large number of native speakers.About 500 million native speakers and 900 million non-native speakers in the world.Only Mandarin Chinese and Spanish have more native speakers.Below is the order of country with largest total number of English speakers.The number in parentheses is the percentage of English speakers versus other languages in the country.

3 simple homemade toothpaste recipes While some people in rural parts of the world may resort to the use of brick, charcoal, rangoli powder, mud, salt or ash for toothpaste, western brushers usually rely on a tube of mystery ingredients to make their pearly whites sparkle like the Pepsodent girl's. But the ingredients found in conventional toothpastes — including sodium fluoride, synthetic dyes derived from petroleum or coal tar, sodium hydroxide (also known as lye or caustic soda), sodium lauryl sulfate, titanium dioxide, artificial sweeteners, and triclosan — might make us think twice about the products we employ for the sake of our teeth. Of course, we’re not actively swallowing the stuff, but it’s unavoidable that a bit will slink down the gullet from time to time.

15 Medicinal Plants And Herbs From The Cherokee People Photo credit: bigstock.com If you love natural medicine, and you love discovering new plants or herbs to help heal your body naturally, then this article is for you. Some of the best healing plants come to us through traditional Cherokee healers. Using plants to treat common illnesses or injuries has been around for centuries as there were no “doctors” or pharmaceuticals. Somehow, the Cherokee people thrived. Dr Oz Home Remedy for a Flawless Skin by Beauty Care for Women on SheSaidBeauty Hello lovely angels, hope the life has been fun and beautiful for you all these days. I know most of you are a fan of Dr. Oz’ Show and when he talks about beauty secrets and skin care tips it is all the more lively to listen to him. This specific post is all about Dr.

Standard Model The Standard Model of particle physics is a theory concerning the electromagnetic, weak, and strong nuclear interactions, as well as classifying all the subatomic particles known. It was developed throughout the latter half of the 20th century, as a collaborative effort of scientists around the world.[1] The current formulation was finalized in the mid-1970s upon experimental confirmation of the existence of quarks. Since then, discoveries of the top quark (1995), the tau neutrino (2000), and more recently the Higgs boson (2013), have given further credence to the Standard Model. Because of its success in explaining a wide variety of experimental results, the Standard Model is sometimes regarded as a "theory of almost everything".

DIY Deodorant: The 4-Ingredient Recipe to De-Stink Naturally Though homemade deodorants may sound like some sort of a Pinterest fail, many DIY-ers are converts to the make-your-own stuff as a cheaper, healthier alternative to store-bought varieties. This recipe is customizable, super inexpensive, and free from loads of scary, bad-for-you ingredients. It’s made with just three base ingredients — baking soda, coconut oil, and cornstarch — which means you likely have what you need right in your pantry. While deodorant helps combat body odor, antiperspirants actually prevent sweat by blocking the ducts that release it.