Why Do We Love Watching Female Celebrities Fail? My Plan For Surviving As Queen Anne's Lesbian Companion. A of all, she definitely was a lesbian, and I’m not going to have this argument with you. 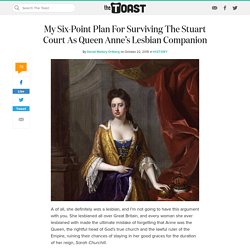 She lesbianed all over Great Britain, and every woman she ever lesbianed with made the ultimate mistake of forgetting that Anne was the Queen, the rightful head of God’s true church and the lawful ruler of the Empire, ruining their chances of staying in her good graces for the duration of her reign, Sarah Churchill. Someday, I’m sure, Nicole will walk us through her survival plan for getting and keeping Henry VIII’s affections, but that day is not today. Today is for explaining how I would have outlasted every one of Queen Anne’s favorites and ridden out her reign in unquestioned trust and support. Step One: Avoid scandal. This isn’t the Tudor Court, and Anne isn’t Henry. Don't Deny Girls the Evolutionary Wisdom of Fairy-Tales. The view from moral high ground is best enjoyed after the check (for whatever you’re moralizing against) clears. 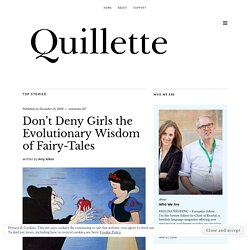 Rather like animal-rights activists who own a string of steakhouses, Disney film stars Kristin Bell and Keira Knightley spoke out recently against the bad examples they feel Disney princesses convey to girls. (Bell voiced the role of Princess Anna in Disney’s 2013 animated film Frozen, and Knightley stars as the Sugar Plum Fairy in Disney’s new live action feature, The Nutcracker and the Four Realms.)

Support the Girls review: an outstanding, quietly feminist comedy. Support the Girls is a barely concealed double entendre of a title for a film set in an even less coy Hooters-style bar called Double Whammies. 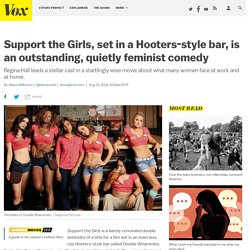 Every day, the waitresses — pretty girls in crop tops and cutoffs — serve beer and wings to the mostly male clientele, though Double Whammies insists it’s a family-friendly “mainstream” place. “It’s like working at Chili’s or Applebees,” one of the veteran waitresses tells a new girl, “but the tips are way better.” But Support the Girls is not at all the winkingly misogynist raunch-com for dudes that set-up might imply. Starting out as a workplace comedy featuring a sparkling female ensemble, the movie — set mostly over a single day — morphs into an affecting, startlingly insightful depiction of the bone-weary work of being a woman in a man’s world. It’s a feminist movie, to be sure, but not a self-congratulatory one. The result is a film that rings bitingly true, but respects its audience enough to let them connect the dots themselves. The Favourite review: a deliciously wicked tale of sex, women, and power. Imagine you bite into a fluffy pink tea cake, only to discover a center filled with pure, bitter chocolate. 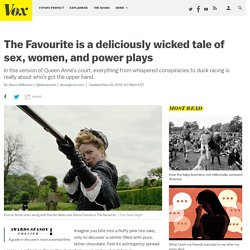 Feel its astringency spread across your tongue. Savor the duel of pleasure and pucker it brings. Now you have a sense of what it’s like to watch The Favourite, the latest acerbic confection from Greek director Yorgos Lanthimos, writer/director of movies like The Lobster, The Killing of a Sacred Deer, and Dogtooth. Lanthimos has always been a divisive filmmaker — his brand of chilly, brutally funny savagery can be a bit much for some audiences — and The Favourite will not break that trend, though it’s more accessible than his previous films, with a screenplay by Deborah Davis and Tony McNamara. It’s sort of a period film, about palace intrigue in the court of Britain’s Queen Anne (who ruled from 1702 to 1714), though certain elements of its mise-en-scène almost certainly never appeared in any royal court at the turn of the 18th century, let alone an English one. Dark? Relax, Ladies. Don’t Be So Uptight. You Know You Want It. Stephen King published It in 1986. 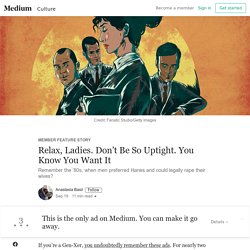 A new movie adaptation hit theaters last year. My friend took her 13-year-old daughter, who loves all things scary. A week later I saw her daughter with the book tucked under her arm. Death threats for singing in her bra - BBC News. Reese Witherspoon Has Something to Say to Women About Ambition. 'Star Wars' Fans Support Actress Kelly Marie Tran Wipes Her Instagram After Months Of Abuse. Analyzing the Gender Representation of 34,476 Comic Book Characters. 21 Times Disney Was Too Damn Real. Britain is banning gender biased ads that typecast girls as ballerinas and boys as engineers — Quartz.

This Woman Inspired A Dialogue About Agreeing With Men's Compliments And People Are Nodding. 44 Tweets For Women By Women That Are Just Really Fucking Funny. 15 Fantastic Feminist Comic Books For Your Kids. The first feminist superhero arrived way back in 1940 when Wonder Woman left her all-female island to join future super friends Batman and Superman to complete DC Comics' holy trinity. 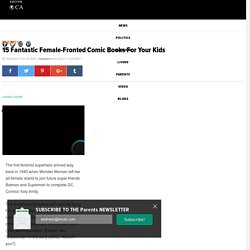 The Amazonian princess will soon be flying her invisible plane into another glass ceiling as she lands the first female-led film of the current superhero blockbuster boom. (Yes, we forgot about "Elektra" and "Catwoman" in the early-2000s. Haven't you?) But while sexism remains a villain to be defeated on the big screen, that's no longer the case on the comic book pages that birthed all this in the first place. Superhero diversity has been increasing by leaps, bounds and Nazi-punches over the past few years. Back in 2010, Marvel had no ongoing female-led comics. So we've put together a list of incredible, amazing and uncanny comic books for kids (yes, this includes boys) featuring female leads, and increasingly female artists and writers as well. America Ms. Moon Girl And Devil Dinosaur Invincible Iron Man. All-female horror anthology XX premieres to cheers at Sundance. PARK CITY, UTAH—Most people would say the main purpose of horror film is to scare the bejeebers out of us. 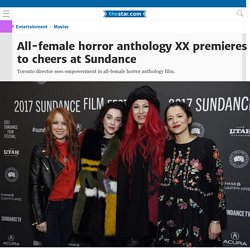 Not the women behind XX, the first all-female horror anthology, which had its world premiere early Monday at the Sundance Film Festival. They see fright films as a form of empowerment and advancement. “It was created in direct response to the lack of opportunities for women in film, particularly in the horror genre,” Toronto writer/director Jovanka Vuckovic told a packed and cheering audience at the Library Theatre, which braved a very dark and snowstormy night to attend the midnight screening. Finally there's a feminist magazine, Kazoo, for girls who love science and climbing trees. In Defense of Villainesses. She’s fabulous. 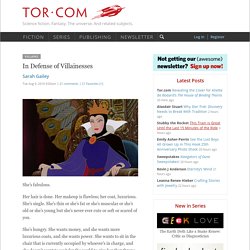 Her hair is done. Her makeup is flawless; her coat, luxurious. How 'Spoilt Modern Indian women' are busting sexist stereotypes on Facebook. Take Back Halloween! All Hail: How Adele's 'Rolling Stone' Cover Destroys the Male Gaze. What does it say about a culture when it’s considered “daring” to put a woman on a magazine cover without the pretense of sex? 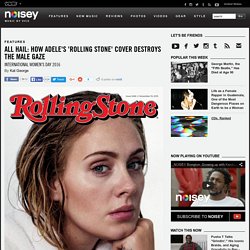 Adele’s new Rolling Stone cover, a tangent to her breathlessly anticipated reemergence, does just that, and it’s striking. Since the birth of art criticism, images of women have been read largely as subject to the male gaze, and it’s rare, even in this fourth wave of feminism, to see an image of a woman rejecting that gaze. In "Trainwreck," Amy Schumer Calls Bullshit On Postfeminism. 26 Times Celebrity Men Shut Down Sexism In The Best Damn Way. 13 Awkward Moments For Feminists. Shop the FLARE X Hudson’s Bay Spring Lookbook Now. Advice for Daughters From Dads of Yore. Having it all in Belle Époque France: how magazines remade the modern woman. At first blush, recent discussions about women “having it all” seem to be uniquely American and of this time: the product of our overachieving society, capitalism, and the constant pressure to succeed. 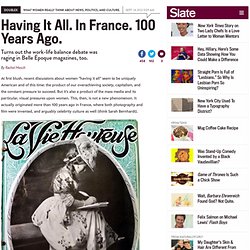 But it’s also a product of the mass media and its particular, visual pressures upon women. This, then, is not a new phenomenon. It actually originated more than 100 years ago in France, where both photography and film were invented, and arguably celebrity culture as well (think Sarah Bernhardt). Photo courtesy Rachel Mesch. Around the time that photographs of famous people were first starting to circulate in French magazines, these magazines were also reimagining how to present the modern French woman. “‘We Have Always Fought’: Challenging the ‘Women, Cattle and Slaves’ Narrative” by Kameron Hurley — A Dribble of Ink.

I’m going to tell you a story about llamas. True Grit, Mattie Ross and Feminism?