'I made art': Pineapple prank mistaken for real gallery installation. If visual art is all about context, then two student pranksters can now claim their "Pineapple on a Pedestal" is the hottest new installation at their university gallery. 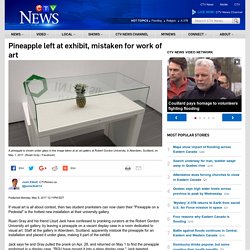 Ruairi Gray and his friend Lloyd Jack have confessed to pranking curators at the Robert Gordon University art gallery, by leaving a pineapple on a vacant display case in a room dedicated to visual art. Staff at the gallery in Aberdeen, Scotland, apparently mistook the pineapple for an installation and placed it under glass, making it part of the exhibit. Jack says he and Gray pulled the prank on Apr. 28, and returned on May 1 to find the pineapple enshrined in a display case.

"RGU have moved it into a glass display case," Jack tweeted. "Amazing. " "A few days ago, I placed a pineapple next to an art display," Gray wrote in a Facebook post. The pineapple was mistaken for part of the gallery's Look Again: Visual Art and Design Festival. Anne of Green Gables: The most popular redhead in Japan. Image copyright Terry Dawes With two red braids hanging from her straw hat, Anne of Green Gables may just be the most recognisable ginger-haired girl in the world. 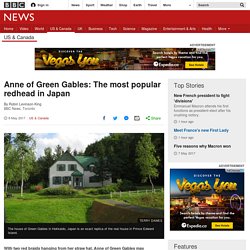 But in Japan, the orphan from Prince Edward Island is more than just a quaint Canadian import - she's a national heroine. As he approached the farmhouse with the forest green shutters and opened the old-fashioned wooden door, Terry Dawes readied himself for what he was about to see inside. Born and raised in Prince Edward Island, Canada's smallest province, Mr Dawes had visited the famous "Green Gables" historic site many times throughout his life. But this building that Mr Dawes was about to enter wasn't that house at all - it was an exact replica built 9,700km away, in Hokkaido, Japan. Now, the park is largely abandoned, a ghost of Japan's economic heyday in the 1990s. Remembering Brutalism: the MySpace Literary Movement that Everyone Hated. The Brutalists didn't burn actual books, it's a metaphor. 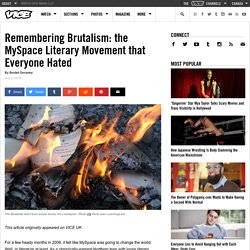 Photo via Flickr user LearningLark. This article originally appeared on VICE UK. What's Going On with the Way Canadians Say ‘About'? The classic purveyors of Canadian accents in the U.S. 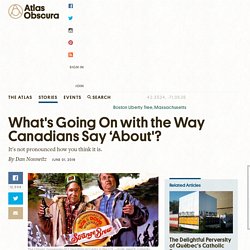 This Woman Re-Creating Celebrity Instagrams Is the Hero We Need. This Profound Tumblr Post Explains Why ’90s Kids Are Endlessly Obsessed With The ’90s. 1970s Men’s Fashion Ads You Won’t Be Able To Unsee. The 1970s must have taken place on a different planet. 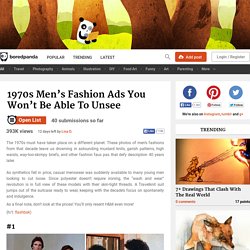 These photos of men’s fashions from that decade leave us drowning in astounding mustard knits, garish patterns, high waists, way-too-skimpy briefs, and other fashion faux pas that defy description 40 years later. As synthetics fell in price, casual menswear was suddenly available to many young men looking to cut loose. Since polyester doesn’t require ironing, the “wash and wear” revolution is in full view of these models with their skin-tight threads. Coloring Book For Grown-Ups That Mocks Adult Life (II) POYKPAC's Coloring for Grown-Ups is back in the headlines after new images were leaked online. 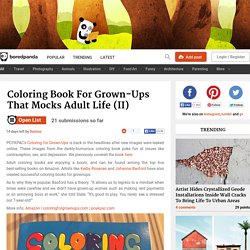 These images from the darkly-humorous coloring book poke fun at issues like contraception, sex, and depression. We previously covered the book here. Adult coloring books are enjoying a boom, and can be found among the top five best-selling books on Amazon. Artists like Kerby Rosanes and Johanna Basford have also created successful coloring books for grownups. 30 œuvres de street art qui dénoncent les vérités qui dérangent. The dude map: How Americans refer to their bros. “It seems safe to report that dude has supplanted totally as the word most often uttered by American youth,” claimed Richard Hill in his 1994 paper on the history of the word “dude.” 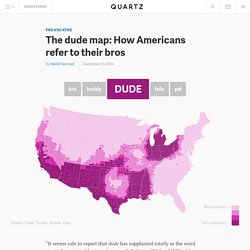 That might be true, but as it turns out, “dude” is more popular in some parts of the United States than others. In other areas of the country, people say “pal,” “buddy,” and other colloquial vocatives—nouns that usually refer to a person. The map above shows the geographical concentration of a few such words. Your Boyfriend Joseph Gordon-Levitt Is Getting His Own Variety Show. Human Kermit the Frog and star of 500 Days of Summer Joseph Gordon-Levitt is headed back to television and, no, it's sadly not to reprise his role as Tommy on a hypothetical reboot of 3rd Rock from the Sun. 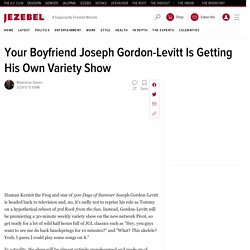 Instead, Gordon-Levitt will be premiering a 30-minute weekly variety show on the new network Pivot, so get ready for a lot of wild half hours full of JGL classics such as "Hey, you guys want to see me do back handsprings for 10 minutes? " Music Video: ÆØÅ (Size Matters) WIN!: Optical WTF WIN. Set Phasers to LOL: Star Wars Vs. Avengers. 37 Signs You're Owning This Whole Being Broke Thing. What It's Like Being The One Person At College Who Doesn't Drink. Incredible Things - Wonderful Weird Products. 74 Of The Tiniest, Most Tasteful Tattoos Ever. This Man Was Deported From Saudi Arabia For Being Too Sexy. Busty Girl Problems & Perks. Irish Dance , Dubstep Music. Stunning Realistic Disney Princesses. Gublerland. Matthew Gray Gubler's photo "this super nice dude just gave me a small bag of someth…" The 7 Breeds of Dog People. Art History Made Easy With Beyoncé Lyrics.

Game of Thrones A Colouring Book 5 x 7 in by TeamArt on Etsy.