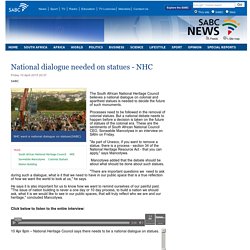 Processes need to be followed in the removal of colonial statues. But a national debate needs to happen before a decision is taken on the future of statues of the colonial era. These are the sentiments of South African National Council CEO, Sonwabile Mancotywa in an interview on SAfm on Friday. "As part of Unesco, if you want to remove a statue, there is a process - section 34 of the National Heritage Resource Act - that you can apply," says Mancotywa. Mancotywa added that the debate should be about what should be done about such statues. "There are important questions we need to ask during such a dialogue, what is it that we need to have in our public space that is a true reflection of how we want the world to look at us," he says.

Click below to listen to the entire interview: Destroying statues is illegal – Zuma:Friday 10 April 2015. Apartheid and colonial statues are the subject of national dialogue following the removal of colonialist Cecil John Rhodes’ statue within the campus after a protest by University of Cape Town students. 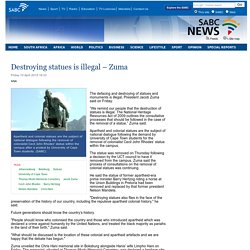 (SABC) The defacing and destroying of statues and monuments is illegal, President Jacob Zuma said on Friday. Rhodes statue removed from UCT:Thursday 9 April 2015. Many cheered as the statue was being removed. 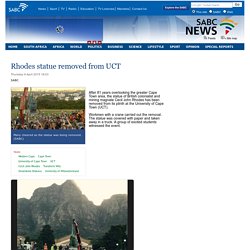 (SABC) After 81 years overlooking the greater Cape Town area, the statue of British colonialist and mining magnate Cecil John Rhodes has been removed from its plinth at the University of Cape Town (UCT). Workmen with a crane carried out the removal. The statue was covered with paper and taken away in a truck. Removing colonial statues hinders reconciliation: Analyst:Tuesday 7 April 2015. EFF denies toppling ‘Horse Memorial’ in Port Elizabeth:Tuesday 7 April 2015. The bronze statue was erected in memory of horses who served and died in the Second Boer War and shows a kneeling soldier holding a bucket of water for his horse. 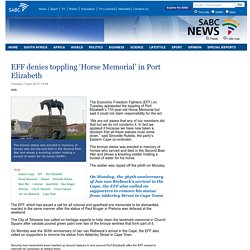 (SABC) The Economic Freedom Fighters (EFF) on Tuesday applauded the toppling of Port Elizabeth’s 110-year-old Horse Memorial but said it could not claim responsibility for the act. “We are not aware that any of our members did that but we do not condemn it. In fact we applaud it because we have now taken a decision that all these statues must come down,” said Simcelile Rubela, the party’s Eastern Cape co-ordinator. Statues an important part our history:Monday 6 April 2015. The Foundation's Cecilia Kruger says they have a mandate to conserve historical monuments. 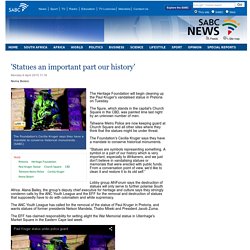 (SABC) The Heritage Foundation will begin cleaning up the Paul Kruger's vandalised statue in Pretoria on Tuesday. The figure, which stands in the capital's Church Square in the CBD, was painted lime last night by an unknown number of men. Tshwane Metro Police are now keeping guard at Church Square and all other sites where they think that the statues might be under threat. The Foundation's Cecilia Kruger says they have a mandate to conserve historical monuments. “Statues are symbols representing something. Lobby group AfriForum says the destruction of statues will only serve to further polarise South Africa. Tshwane metro warns against destroying of statues:Monday 6 April 2015. Destroying of statues has put South Africans and political parties against each other. 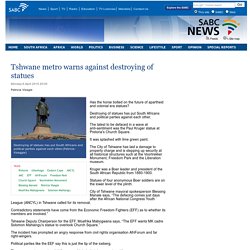 (Patricia-Visaggie) Has the horse bolted on the future of apartheid and colonial era statues? Destroying of statues has put South Africans and political parties against each other. The latest to be defaced in a wave at anti-sentiment was the Paul Kruger statue at Pretoria's Church Square. It was splashed with lime green paint. The City of Tshwane has laid a damage to property charge and is stepping up security at all historical structures such at the Voortrekker Monument, Freedom Park and the Liberation museum.

Kruger was a Boer leader and president of the South African Republic from 1880-1900. EFF members torch war memorial statue :Friday 3 April 2015. EFF regional leaders are adamant that they will continue with their campaign of burning statues that reflects the painful apartheid past. 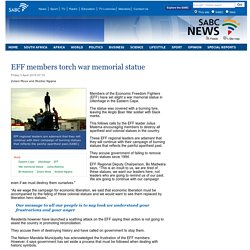 (SABC) Members of the Economic Freedom Fighters (EFF) have set alight a war memorial statue in Uitenhage in the Eastern Cape. The statue was covered with a burning tyre, leaving the Anglo Boer War soldier with black marks. This follows calls by the EFF leader Julius Malema encouraging members to destroy all apartheid and colonial statues in the country.

These EFF regional leaders are adamant that they will continue with their campaign of burning statues that reflects the painful apartheid past. They accuse government of failing to remove these statues since 1994. EFF Regional Deputy Chairperson, Bo Madwara says, “This is an insult to us, we are tired of these statues, we want our leaders here, not leaders who are going to remind us of our past. Our message to all our people is to say look we understand your frustrations and your anger. City of Tshwane condemns the vandalism of Anglo Boer War statue. Eastern Cape police to to beef up security around all colonial statues. EFF members set alight war memorial statue.