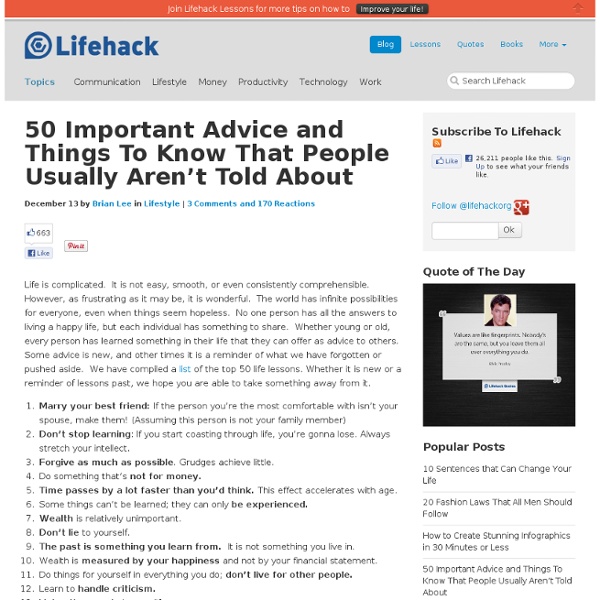 Life is complicated. It is not easy, smooth, or even consistently comprehensible. However, as frustrating as it may be, it is wonderful. The world has infinite possibilities for everyone, even when things seem hopeless. No one person has all the answers to living a happy life, but each individual has something to share. Whether young or old, every person has learned something in their life that they can offer as advice to others. Marry your best friend: If the person you’re the most comfortable with isn’t your spouse, make them! Featured photo credit: A toddler climbing on a steps via Shutterstock

The Well of Being: An Extraordinary Children’s Book for Grownups about the Art of Living with Openhearted Immediacy by Maria Popova A lyrical invitation to awaken from the trance of the limiting stories we tell ourselves and just live. “This is the greatest damn thing about the universe,” Henry Miller wrote in his magnificent meditation on the meaning of existence, “that we can know so much, recognize so much, dissect, do everything, and we can’t grasp it.” Paradoxically enough, the fragment of the universe we seem least equipped to grasp is the truth of who we ourselves are. Who are we, really, when we silence the ego’s shrill commands about who we should be, and simply listen to the song of life as it sings itself through us? Succumbing neither to religiosity nor to scientism, neither to myth nor to materialism, Weill dances across the Big Bang, the teachings of the 18th-century Italian philosopher and mystic Ramchal, evolution, 9/11, and life’s most poetic and philosophical dimensions.

Maybe ? Maybe. . .we were supposed to meet the wrong people before meeting the right one so that, when we finally meet the right person, we will know how to be grateful for that gift. Maybe . . . when the door of happiness closes, another opens; but, often times, we look so long at the closed door that we don’t even see the new one which has been opened for us. Maybe . . . it is true that we don’t know what we have until we lose it, but it is also true that we don’t know what we have been missing until it arrives. Maybe . . . the happiest of people don’t necessarily have the best of everything; they just make the most of everything that comes along their way. Maybe . . . the brightest future will always be based on a forgotten past; after all, you can’t go on successfully in life until you let go of your past mistakes, failures and heartaches. Maybe . . you should always try to put yourself in others’ shoes.

Brain Hacks ...For answer Holmes clapped the hat upon his head. It came right over the forehead and settled upon the bridge of his nose. "It is a question of cubic capacity, " said he; "a man with so large a brain must have something in it Limitless living FREE guides! - Limitless365 / Limitless365 Get instant access to some of my best material for creating a limitless body, mind, and life. Everything you see below is yours when you become a member of the limitless community. What are you waiting for? Close the gap between what you are capable of and what you currently do. Live Limitless,

Draw A Creative Mind Map for Self Analysis Many personal development experts share about the benefits of using mind maps. My post today takes it one step further with how I have used the concept of mind mapping for self analysis. I also share illustrations from my personal art journal that I created some time ago. I drew them as part of my pre-vision board exercises. The (above) mind map picture that I did for self-analysis was my first.

6 Logical Fallacies That Cost You Money Every Day Throws Good Money After Bad The competitive instinct is not just a phrase football commentators invented to give words to the tingly feeling they get watching Brett Favre play football. Our brain's natural tendency towards competition is arguably the reason your family survived the hunter gatherer knife fight of 2000 BC. And as countless uninspired armies and poorly coached teams have demonstrated throughout the years, your ability to compete tends to be directly proportional to your ability to convince yourself that you're doing the right thing. This leaves us with a brain that loves to compete, and is awesome at convincing itself that it's right. In the financial realms, when these two instincts collide, your brain will play a retarded game of chicken with reality that economists have termed "irrational escalation of commitment".

20 Things That Mentally Strong People Don't Do I often write about the things I believe we all should be doing, trying or experimenting with in order to maximize our success and happiness. However, it’s not always the things we do that make the biggest difference in our lives; it’s often the things we avoid doing that have the biggest effect. As human beings, we have a strong aversion to not doing; we feel that in order to produce results, there must be an initial action. However, because we are almost always doing something, piling on more and more often has a negative effect, rather than a positive one. Among the mentally strong, there are several actions that are avoided in order to produce the greatest benefit in the shortest period of time.

10 Steps To Create And Live Your Life With Purpose A life without a purpose is a miserable one at best. A life without a purpose means you aren’t taking advantage of the gifts you have been given as a human being, missing out on all of life’s greatest opportunities and experiences simply because you chose a monotonous routine of security and regret. It’s the road to being average, being empty, turning your life into a ticking clock that you’ll want to stop more and more every day. 99 Resources to Research & Mine the Invisible Web College researchers often need more than Google and Wikipedia to get the job done. To find what you're looking for, it may be necessary to tap into the invisible web, the sites that don't get indexed by broad search engines. The following resources were designed to help you do just that, offering specialized search engines, directories, and more places to find the complex and obscure.

There's no speed limit. (The lessons that changed my life.) Whether you're a student, teacher, or parent, I think you'll appreciate this story of how one teacher can completely and permanently change someone's life in only a few lessons. I met Kimo Williams when I was 17 - the summer after I graduated high school in Chicago, a few months before I was starting Berklee College of Music. I called an ad in the paper by a recording studio, with a random question about music typesetting. When the studio owner heard I was going to Berklee, he said, “I graduated from Berklee, and taught there for a few years, too. I'll bet I can teach you two years' of theory and arranging in only a few lessons.