Why I Will Never Have a Girlfriend - nothingisreal.com 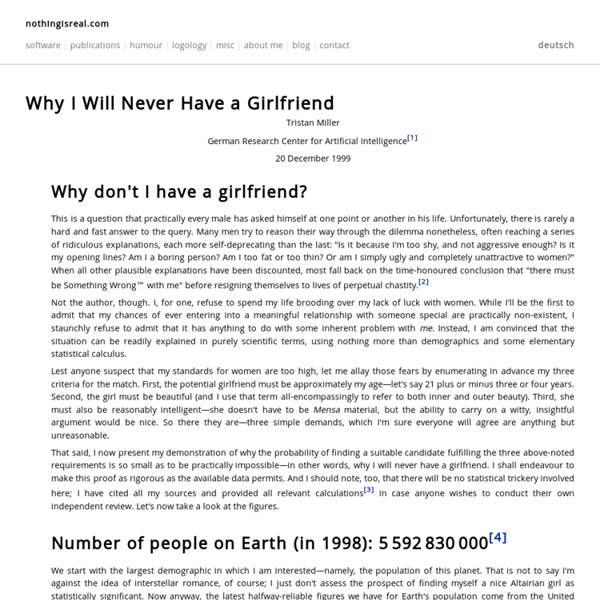 Tristan Miller German Research Center for Artificial Intelligence[1] 20 December 1999 Why don't I have a girlfriend? This is a question that practically every male has asked himself at one point or another in his life. Not the author, though. Lest anyone suspect that my standards for women are too high, let me allay those fears by enumerating in advance my three criteria for the match. That said, I now present my demonstration of why the probability of finding a suitable candidate fulfilling the three above-noted requirements is so small as to be practically impossible—in other words, why I will never have a girlfriend. Number of people on Earth (in 1998): 5 592 830 000[4] We start with the largest demographic in which I am interested—namely, the population of this planet. …who are female: 2 941 118 000[5] I'd've thought that, given the title of this essay, this criterion goes without saying. …in "developed" countries: 605 601 000[5] …currently (in 2000) aged 18 to 25: 65 399 083[4][5]

Non-drinkers can finally meet everyone’s ‘judgmental’ expectations by adapting statements from typical college party-goers | Campus Basement After several years’ worth of attending college parties as a non-drinker, I am noticing a concerning trend: we alcohol-free anomalies just are not meeting everyone’s expectations. When we show up to parties, ready to enjoy ourselves without bothering anyone or making a scene, we are a disappointment. Why? Because we are not judging people enough. Not by a long shot. I’m simply not going to stand for this. Well fear no more, for I have come up with an ingenious plan to provide more than enough narrow-minded judgment for everyone that likes to party and party hard. Statements to use IMMEDIATELY 1) You drink? 2) Why do you drink? 3) Just try it one time! 4) I used to be scared of not drinking too, before I really knew what I was talking about. 5) Are you worried your parents will find out if you don’t drink?? 6) The more often you don’t drink, I promise, you won’t taste anything. 7) Come on, I bet you would be SUCH A FUN sober person. 9) Do I seem like I haven’t been drinking right now?

The Noticing Game - (moving, sexy, fun) This little game had us both in tears the last time I played it… And the time before that, we were both smiling so much our cheeks hurt… It’s simple, easy, in-the-moment, and you can play it with your lover, a friend, on a date, or with someone you’ve just met. Below is a description of the game, an excerpt from our Games Night Manual. Here it is: The Noticing Game Requirements: 2 people Warning: You will both likely feel more present, playful, connected, and perhaps even turned-on after playing this game. Directions:Two people stand directly across from each other, standing or sitting, making eye contact. A: What I notice when I’m with you is…<fill in the blank> B: Hearing that, what I’m noticing is…<fill in the blank> A: Hearing that, what I’m noticing is…<fill in the blank> …and so on, alternating back and forth… …until you’re incapacitated with laughter, tears, or find yourselves passionately making out… …or, whenever seems like a good time to stop. The other person’s physical appearance:

Cheryl Strayed on Dealing With The Success of Others Designed by Dmitry Baranovskiy for the Noun Project The creative routines of famous creatives has been popular internet fodder this year. The Pacific Standard thinks this obsession and trend of emulating famous artist’s habits is problematic, to say the least. The larger picture, says Casey N. Cep, is that most artists did not always followed these routines they’re known for anyways. The idea that any one of these habits can be isolated from the entirety of the writer’s life and made into a template for the rest of us is nonsense. We often talk about process at 99U, so we think this is a great debate. Read the rest of the article here. Apprendre à manipuler et à mentir - mentalisme, psychologie, empathie

Size Does Matter: The Smaller Your Device, the Lower Your Confidence Designed by Dmitry Baranovskiy for the Noun Project The creative routines of famous creatives has been popular internet fodder this year. The Pacific Standard thinks this obsession and trend of emulating famous artist’s habits is problematic, to say the least. The larger picture, says Casey N. The idea that any one of these habits can be isolated from the entirety of the writer’s life and made into a template for the rest of us is nonsense. We often talk about process at 99U, so we think this is a great debate. Read the rest of the article here.

How to get into strategy Strategy | Comments | Last built on 15 October, 2009 So, you want to get a strategy job? I recently read a theory that really struck a chord with me and helped me make sense of my journey over the past few years. Forgive me for not citing the source or being able to recollect the percentage accurately but the writer claimed that 80% of the jobs that my children’s generation will be doing haven’t been invented yet. Think about that. But what if the system is broken? What if you started with a clean sheet of paper… how would you build a system around how you think – and not force-fit how you think into an old system incapable of change? Square pegs need square holes The reason I bring this up in a post about getting into strategy is that the above is really liberating. I bring this up because if you’ve chosen to read this post then you may well be feeling a bit stuck right now. You’re not alone. The problem with ‘strategy’ The word ‘strategy’ is really mis-used by many people. 1. 2. 3. 4. 5.

Why I Don't Drink Alcohol Any More The worst part about not drinking is having to tell people you don’t drink. It’s difficult because drinking usually occurs at a time when it’s socially acceptable to drink; situations where not drinking is a little bit strange. On a Friday night after work. Someone’s leaving their job. Maybe someone’s celebrating? Why are you not drinking? Or at a buck’s night, where you’re expected to cut loose. You’ll be offered a drink; someone will ask to buy you one -– a friendly gesture — an outstretched hand waiting for the handshake that never comes. Of course no-one gets visibly upset when you don’t accept. Why not? “A Scotsman that doesn’t drink?” Then the completely polite “if you don’t mind me asking . . .” And of course I don’t . . . “Why don’t you drink?” In the beginning I have so many reasons for not drinking. But I remember the first time I stopped drinking. I was 12 years old. I grew up in Scotland and everyone drinks. The sun blasted 24C and it was a long weekend. So that’s reason #1.