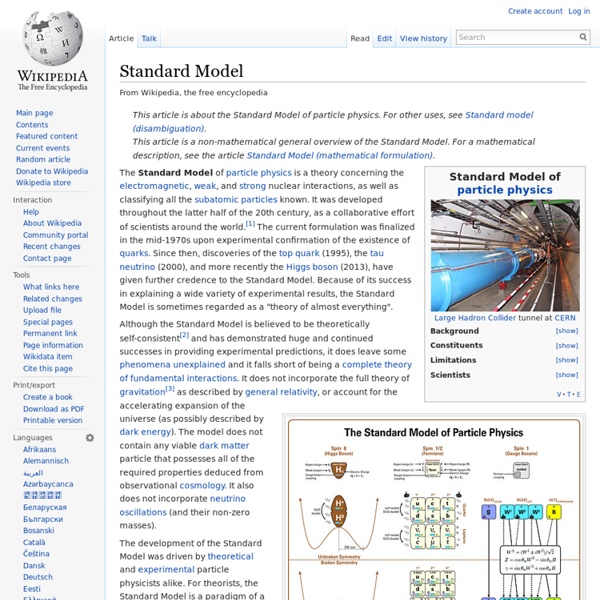 The Standard Model of particle physics is a theory concerning the electromagnetic, weak, and strong nuclear interactions, as well as classifying all the subatomic particles known. It was developed throughout the latter half of the 20th century, as a collaborative effort of scientists around the world.[1] The current formulation was finalized in the mid-1970s upon experimental confirmation of the existence of quarks. Since then, discoveries of the top quark (1995), the tau neutrino (2000), and more recently the Higgs boson (2013), have given further credence to the Standard Model. Because of its success in explaining a wide variety of experimental results, the Standard Model is sometimes regarded as a "theory of almost everything". Historical background[edit] The Higgs mechanism is believed to give rise to the masses of all the elementary particles in the Standard Model. Overview[edit] Particle content[edit] Fermions[edit] Gauge bosons[edit] Higgs boson[edit] Main article: Higgs boson E.S.

The Wicker Man (1973 Edit Storyline Sgt. Howie travels to Summerisle to investigate the disappearance of a young girl. How to fake a British or American Accent English is sometimes a state of confusion for many learners with the large variety of accents, regional slang, and dialects to chose from. Do you speak more American or British or a little bit of both? Which of the major types of English do you find easier to understand, sounds nicer to you, and more difficult to understand? Facts about English: English has a large number of native speakers.About 500 million native speakers and 900 million non-native speakers in the world.Only Mandarin Chinese and Spanish have more native speakers.Below is the order of country with largest total number of English speakers.The number in parentheses is the percentage of English speakers versus other languages in the country.

Graviton Theory[edit] The three other known forces of nature are mediated by elementary particles: electromagnetism by the photon, the strong interaction by the gluons, and the weak interaction by the W and Z bosons. The hypothesis is that the gravitational interaction is likewise mediated by an – as yet undiscovered – elementary particle, dubbed as the graviton. Higgs boson The Higgs boson is named after Peter Higgs, one of six physicists who, in 1964, proposed the mechanism that suggested the existence of such a particle. Although Higgs's name has come to be associated with this theory, several researchers between about 1960 and 1972 each independently developed different parts of it. In mainstream media the Higgs boson has often been called the "God particle", from a 1993 book on the topic; the nickname is strongly disliked by many physicists, including Higgs, who regard it as inappropriate sensationalism.[17][18] In 2013 two of the original researchers, Peter Higgs and François Englert, were awarded the Nobel Prize in Physics for their work and prediction[19] (Englert's co-researcher Robert Brout had died in 2011). A non-technical summary[edit]

HomeschoolScientist Upload TheHomeschoolScientist.com Subscription preferences 50 Important Advice and Things To Know That People Usually Aren't Told About Life is complicated. It is not easy, smooth, or even consistently comprehensible. However, as frustrating as it may be, it is wonderful. The world has infinite possibilities for everyone, even when things seem hopeless. No one person has all the answers to living a happy life, but each individual has something to share. Whether young or old, every person has learned something in their life that they can offer as advice to others.

Gluon Gluons /ˈɡluːɒnz/ are elementary particles that act as the exchange particles (or gauge bosons) for the strong force between quarks, analogous to the exchange of photons in the electromagnetic force between two charged particles.[6] In technical terms, gluons are vector gauge bosons that mediate strong interactions of quarks in quantum chromodynamics (QCD). Gluons themselves carry the color charge of the strong interaction.

Related:
Related:  risully   -  underwater statues   -  Underwater Photography   -  Animals Underwater   -  Scottish Statues   -  Edinburgh Sculpture & Statues   -  can be used underwater   -  underwater activities   -  Related Articles: Colonial statues   -  Related articles: Xenophobic attacks/Statues   -  Brain Hacks   -  100 Ways to Serve Others | Learn This   -  Stonehenge Rebuilt   -  The Burning House   -  30 Life-Enhancing Things You Can Do in 30 Minutes or Less   -  How To Make Your Own Lotion Bars! | One Good Thing by Jillee   -  Rethinking Oral Health Care: A Homemade Toothpaste Recipe for Tooth Remineralization   -  50 Important Advice and Things To Know That People Usually Aren't Told About - Lifehack   -  Mysterious paper sculptures « Central Station   -  20 Things That Mentally Strong People Don't Do   -  These 19 Rooms May Seems Normal At First..Till You Find Their Hidden Secrets. Then They're GENIUS.   -  10 Signs You Have Found Your Soulmate | Spirit Science and Metaphysics   -  How to Remove Attachments to Past Relationships | Spirit Science   -  5 Steps to Transform Yourself into Higher Self   -  How to fake a British or American Accent | LearningwithJohn.com