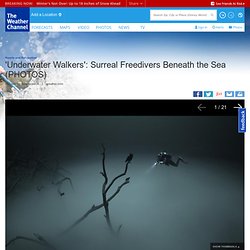 She made it her life's goal to capture view of a world most never see, and has inspired more people to look differently at what lies beneath the surface. "The whole message of putting freedivers down with clothes on and with sharks is that we're all interconnected," Barrett said of her latest photo series in an interview with weather.com. "We may be walking around up here, but there's a whole ocean down there that we depend on and that depends on us. " Barrett, who has traveled the world to shoot everything from sting rays to coral reefs, recently turned her attention to freediving. The sport has exploded in recent years to become the fastest growing segment of the diving industry, reported the AP. (MORE: Diving without Scuba Gear) "The good thing about using freedivers is they don't panic when they don't have air," Barrett said.

Girl with Stingrays. Photographed by Erick and Ian Regnard. Freddy Cerdeira Photography. Photo by Hayley Anderson, taken in Ios, Greece. Unbelievable Underwater Photography. Underwater photography is in some ways surreal, because beneath the waters surface of the great oceans and seas it is so foreign for most of us land creatures! 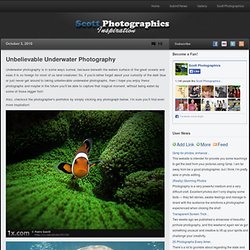 So, if you’d rather forget about your curiosity of the dark blue or just never get around to taking unbelievable underwater photographs, then I hope you enjoy these photographs and maybe in the future you’ll be able to capture that magical moment, without being eaten by some of those bigger fish! Also, checkout the photographer’s portfolios by simply clicking any photograph below, I’m sure you’ll find even more inspiration! If you’d like to know more about this technique please follow this link: How to photograph Underwater – WikiHow Amazing Under Water Photography: Thank you to all the photographers that allow their photographs to be freely shared!

All Photographs shown here are © All Rights Reserved or © Attribution-NonCommercial-ShareAlike! Dolphin Dreams. Insane Underwater Movie Set. Have you ever wondered how movies shoot their underwater scenes? 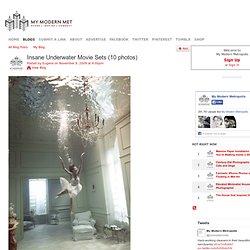 In one of the most elaborate sets in the world, British film production company Pinewood Studio captures breathtaking shots in a tank filled with 1.2 million liters (317,000 gallons) of water. The underwater stage, which opened in 2005, has been used for a huge number of TV commercials, music videos and films, including The Bourne Ultimatum, Atonement, Elizabeth and Casino Royale. ''It's exciting to show the story of the production through underwater pictures," said Phoebe Rudomino, a commercial diver and photographer who took all the shots. "It's interesting to take a wider shot and show what is going on behind the camera.

The final image or film sequence may look very slick but the reality will often be very different. Pinewood Studio website via dailymail, shortlist. Behind the Scenes. Underwater Nude. ‘The Vandenberg: Life Below The Surface’ by Andreas Franke. Not only could contemporary art be seen in a gallery, but sometimes we can also come across it in rather unexpected places like, for example… under the sea. 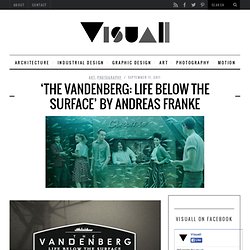 Just this very idea occurred to Andreas Franke, an Austrian professional photographer and avid diver, after he had taken several photos of Vandenberg shipwreck in the Florida Keys National Marine Sanctuary. Having come back to Austria and started compositing the images, Andreas thought that it would be very fascinating if they could be exhibited on this shipwreck. With the help of Donna Belej, his New York producer, he managed to put his plans into practice. In order to see this unusual exhibition, which was titled The Vandenberg: Life Below The Surface, the visitors have to dive at a depth of 28 meters. Twelve digitally layered photographs are attached to the ship’s weather deck with strong magnets which grants a damage free removing after the end of the exhibition. 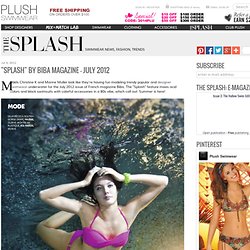