The Last of His Kind - Jody MacDonald Photography. Meet Rajan. 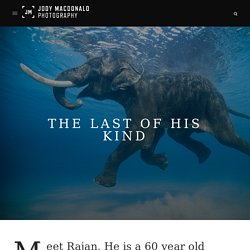 He is a 60 year old Asian elephant who was brought to the Andaman Islands, off the coast of India, for logging in the 1970’s. Along with a small group of ten elephants, he was brutally forced to learn how to swim in the ocean, so that they could bring the logged trees to nearby boats and then eventually swim on to the next island. When logging was eventually banned in 2002, Rajan was out of a job. He is the last one of the group to survive and is living out his days on Havelock Island, walking in the sunlit forests and swimming in the ocean.

I spent over a week with Rajan and his Mahout (caretaker) Nazroo who have been together for more than thirty years. 'Sea Horse' Emperor penguins shoot out of the Ross Sea in Antarctica (Paul Nicklen) Indian Elephant Swimming. Underwater Crocodile. Tiger diving for meat. "Little Penguin" by Paul Souders. Kingfisher diving. Bear catching salmon. Random photo Submit your photo Stumble Thru animal photography Tags: bear. 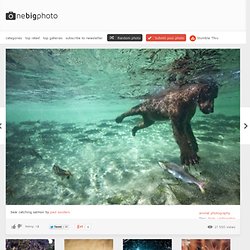